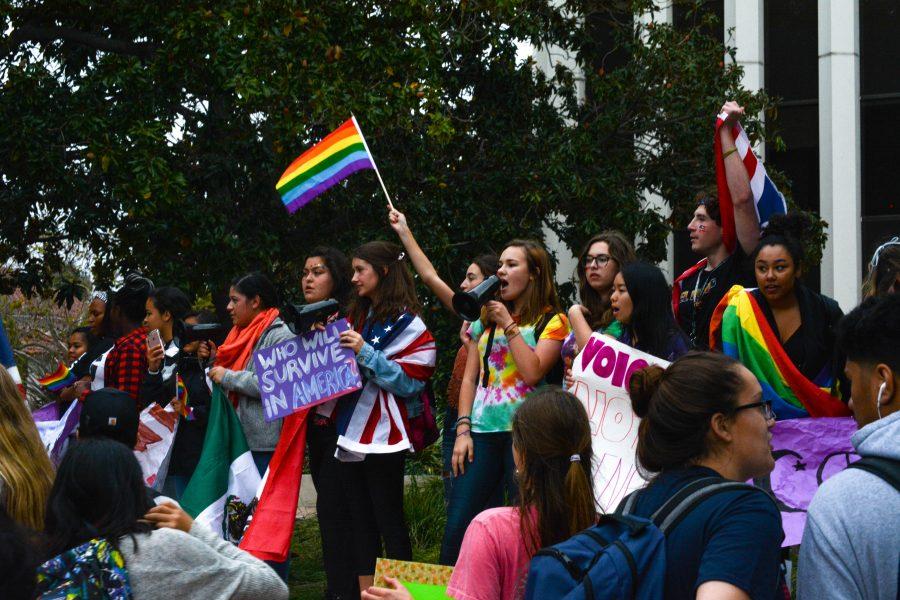 Protesters gather in front of Palo Alto City Hall at the conclusion of the march. | Max Wang

Hundreds of Palo Alto students and community members chanted messages like these, of love and acceptance, during the Palo Alto Peace March on Tuesday afternoon in downtown Palo Alto’s Lytton Plaza. According to the Southern Poverty Law Center, the United States encountered a spike in hate crimes since Donald Trump’s victory in the presidential election on Nov. 9. Seeking to counteract the divisiveness that has been prompted by the presidential election, a group of about 10 Palo Alto High School (Paly) students organized the protest, which focused on unity and the rights of marginalized groups such as women, the LGBTQ+ community and racial minorities.

Many Gunn students joined peers from across the district to express their solidarity, including junior Tyne Sheynkman. “There’s been a lot of stuff happening recently, not necessarily because of Trump, that has brought a lot of hate down on so many different people and that’s not a good thing,” Sheynkman said. However, Trump’s advocacy of mass deportation and stricter immigration policy, Sheynkman said, “is scary.”

Though there is a common sentiment that protesting creates an “us against them” dichotomy, Sheynkman believes the march conveyed a more positive message. “The point is to show solidarity to the people who’ve been hurt and to show people that there is still good here, and that there are people who are,” Sheynkman said.

Paly students first participated in a walk-out, which eventually led to a march in downtown Palo Alto that local students and community members later joined. Protesters then stopped at Lytton Plaza for a demonstration, where several students gave speeches about political unity and the rights of marginalized communities.

Paly juniors Zoe Stedman and Louisa Keyani, organizers of the event, spoke about the importance of women’s rights and female empowerment. “Our worth and value is not determined by how attractive someone finds us,” Keyani said. “Femininity is not a weakness. The way each person dresses and presents themselves empowers everyone in their own way, and that’s okay. Girls are more than objects and we are more than just pretty.”

Stedman echoed Keyani’s message that everyone, women included, can have their voice heard despite the discrimination they might face. “We deserve to be taken seriously. Why is it that when I finally get the courage within myself to speak up for my rights, I’m immediately told to calm down, and that I have no chill and that I’m not fun anymore,” Stedman said in a speech to the crowd. “My passion is not pointless and we are not overreacting.”

Community members of all ages also attended the event to support young people. “We need to keep putting pressure on the government and be the eyes and ears and watching them and making them accountable, not just today, for all of our safety, for as long as it takes,” Gunn parent Lea Bowmer said.

Famous singer Joan Baez also made an appearance at the march, singing a civil disobedience song from the civil rights movement and anti-Vietnam movement. “I’m here to support you, I’m now an elder and you guys are next in line, maybe double next in line,” she told students. “We need you, and I think that now, Trump and the people around them have no empathy for anybody. So that means it’s up to us to have empathy.”

At the conclusion of the march, senior Isha Gupta stood before City Hall, encouraging demonstrators to have respect for the democratic system and exercise their rights to protest. “The most important thing about all of this is that we live in a democracy and we’re able to do this because of living in a democracy and we need to respect the results,” Gupta said. “At the end of the day, peace is going to trump all of this.”