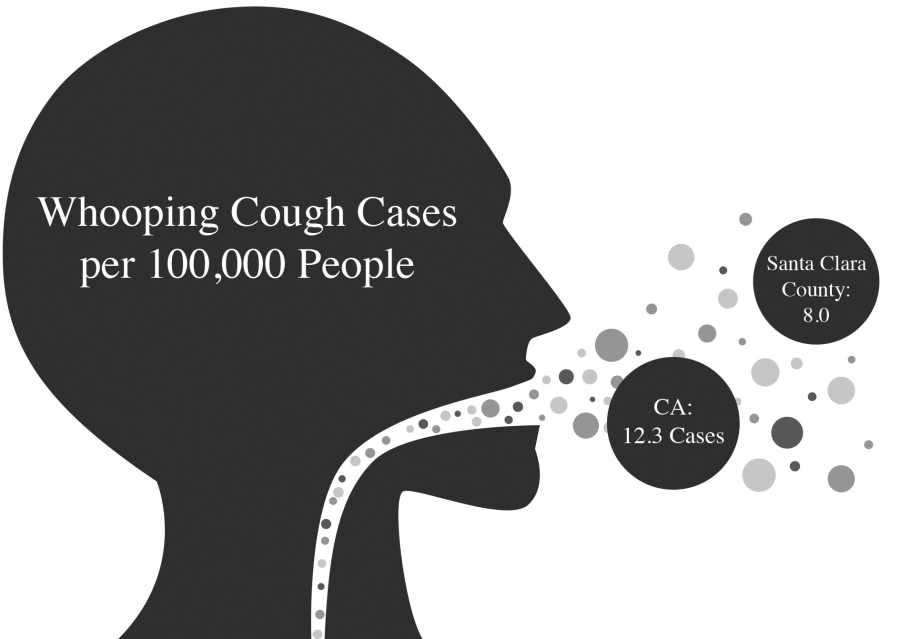 Since mid-September, there have been multiple cases of pertussis in the student body, resulting in increased health precautions from administration. Pertussis, more commonly known as whooping cough, is a highly contagious respiratory disease that can be life-threatening for infants. Cases of whooping cough have been common in Palo Alto, with the last outbreak taking place at Palo Alto High School in 2006.

Whooping cough is categorized under California Health and Safety Code 120335 as an infectious disease that requires an immunization requirement. The Palo Alto Unified School District (PAUSD) Board policy states that students infected with any disease under this category can be excluded from school unless written permission of a health officer is provided.

According to Principal Dr. Denise Herrmann, because Gunn has had more than three cases of whooping cough within a 30-day period, the Santa Clara County Public Health Department has given the school additional measures to follow to maintain the safety of students and minimize the spread of whooping cough. Teachers have been instructed to send students to the nurse if they are coughing excessively. After the nurse assesses the situation, the student may be required to get tested for whooping cough by a physician. “We did have students over the last two weeks who came to the nurse and [were] then sent home, and their parents needed to take them to the doctor to have a test before they could return to school,” Herrmann said. “Just in case they were infected, we didn’t want them infecting any more students.” Additionally, the district is required to send out an exposure notice to families of students in classrooms where there has been an exposure to whooping cough.

Senior Kiana Fong, who was in a class exposed to whooping cough, decided to get tested for the disease as a precaution. According to Fong, when she visited her doctor, he was certain that she did not have whooping cough and told her to take Tylenol. One week after being tested, Fong was escorted out of class on Oct. 21 without warning, and she was told she could not attend school or any school events. Despite having a doctor’s note, Fong was not allowed to attend any homecoming festivities. “I think the administration could have talked to me about it more instead of just saying I wasn’t allowed to [be at school],” Fong said. “I think they could have been more understanding of what really happened. Listen to my situation, listen to my doctor.”

However, whooping cough is classified as a communicable disease, which means that physicians are required to report positive test results to the Santa Clara County Public Health Department. According to PAUSD Communications and Community Engagement Officer Jorge Quintana, Public Health then reports these cases to schools along with directions that they must follow. Some of these directions include how long a certain student must stay home from school. This means that a doctor’s note saying a student can come back to school will not suffice, and schools must follow the Public Health reports. “That’s the whole reason why we have public health, because individuals may keep those things secret, and even though they’re contagious, they might continue to go about their daily lives,” Herrmann said.

According to Santa Clara Valley Medical Center’s Public Information Officer Joy Alexiou, the Public Health Department is working with Gunn to make sure infected students are receiving proper treatment. “The department has also conducted a contact investigation, which means interviewing each case to identify their close contacts, who are most often family members,” Alexiou wrote in an email. These close contacts may be recommended to take the same antibiotic treatment before their test results come back, Alexiou says.

Herrmann, who has had close contact with students diagnosed with whooping cough, felt herself getting sick and got checked for the disease on the Monday before Thanksgiving break. “It’s important to me to be modeling what we want our students to be doing, so as soon as I felt that I had symptoms, I went to urgent care,” she said. She returned to school after completing the required five days of antibiotics.

Senior Tessa Vetter, who was sent home after a teacher heard her coughing, missed two days of school. Although she brought in a doctor’s note clearing her, she was told that she was not allowed on campus until her official results were in. “I was totally healthy, and I ended up missing a test and an in-class essay because of it, and it’s just a really frustrating thing, especially because I was cleared by the doctor,” she said. “It didn’t seem necessary for me to still be out of school.”

Because whooping cough is so contagious, the Public Health Department wants to ensure that schools are taking the necessary precautions to protect students and teachers. “While we want all of our students on campus actively engaged in learning, their safety and that of their classmates is a top priority,” Quintana wrote in an email.