Construction to begin on campus 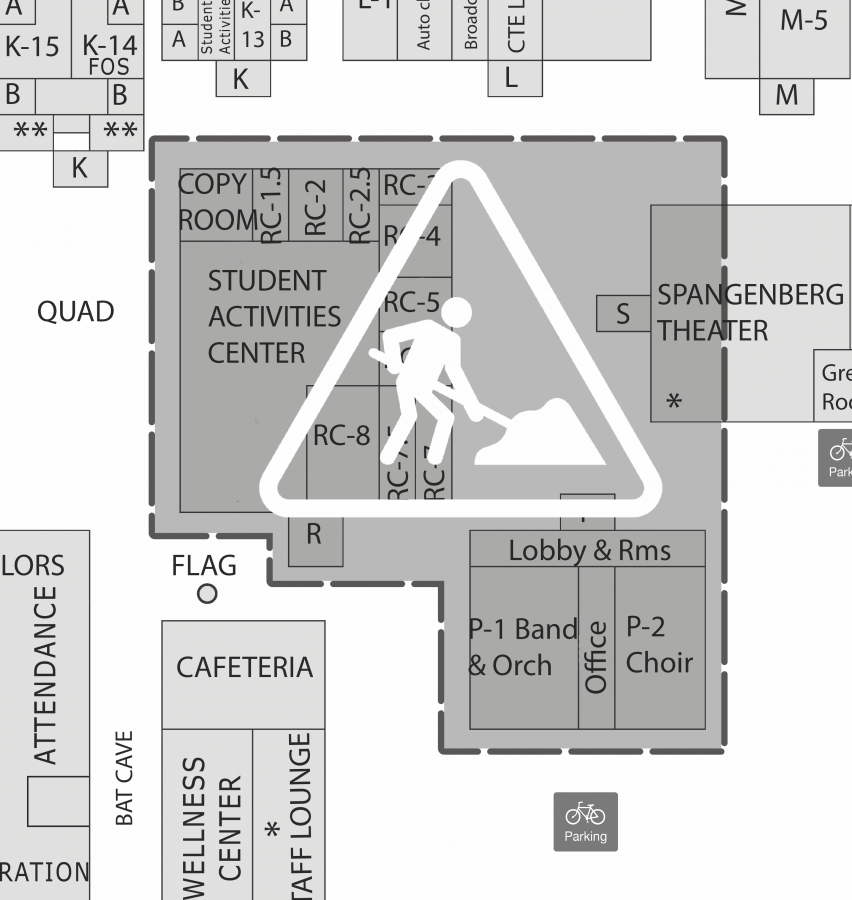 In January, the area surrounding Spangenberg Theater, the Student Activities Center (SAC) and the music building will be fenced off as construction on the Central Building Project begins. The Central Building Project involves the renovation of Spangenberg’s lobby, new music classrooms connected directly to Spangenberg and a two-story building that will replace the SAC. The new SAC will house classrooms for journalism and bring together the currently scattered guidance and health resources into one Wellness Center. The project will also create a new courtyard between the two-story building and Spangenberg, as well as an entrance plaza next to Spangenberg.

Preparation for the upcoming construction began in the summer. According to Assistant Principal Miriam Stevenson, who is in charge of all construction projects, portables in the Village were refitted for the music department in October. Music teacher Sandra Lewis says that the transition was difficult due to the amount of equipment and other items stored in the music room. “It wasn’t complicated, but it’s time-consuming and we have a lot,” she said. “We’ve basically had to move stuff that’s been here since the beginning of time, since the beginning when the school opened. We still aren’t completely moved out–we have stuff on the walls in the music room which we’ll be getting over Thanksgiving break and over winter break. Moving is always challenging, but our students were really flexible about the change in location and helpful during the move.”

The SAC also relocated to the K-building at the beginning of the school year. Now, however, only the store is open to students. Additionally, other parts of the school that are affected by the start of construction include the custodians’ shed and the book storage for English and Social Studies, which are going to be moved as well.

Stevenson says the next step will be evident to students in the beginning of the second semester, when the area around the SAC will be fenced off. Also, one of the main passageways that goes from the Freshman Quad to the Senior Quad, between Spangenberg and the music building, will be fenced off in March. “Inevitably, at some point they’re going to need to fence off this passageway, which is one of the main arteries through campus,” Stevenson said.

With construction crews on campus, it is very likely that loud noises will affect students. Stevenson says it is undesirable, but unavoidable. “It’s hard to minimize all of that, and I know they’re going to be mindful of trying to do the most noisy work when students aren’t here and communicate with the school when there will be noisy work taking place so we can try to minimize the impact,” Stevenson said. “Unfortunately, in construction, most work needs to happen during the weekday for lighting and costs. Evenings or weekend work is more difficult to arrange and involves additional costs that need to be managed responsibly, because public funds are [financing] the building.”

The project will last two-and-a-half years, says Stevenson, with the renovations on Spangenberg finishing first. “The first thing that they expect will be complete and serviceable and we can access again is going to be Spangenberg Theater,” Stevenson said. “They expect that it’ll probably be offline for about a year, maybe a year and a half, from the start date of the work that they do on the theater itself.”

Both the theater and music departments are affected by the loss of Spangenberg and the music classrooms, as well as student organizations such as TedX Gunn, since they will have to find new venues to hold their events. Lewis says that most music concerts will be held at Palo Alto High School’s (Paly) Performing Arts Center (PAC). Since musical instruments are sometimes difficult to transport between the two schools, Lewis says that extra consideration is required to make sure students have the instruments they need. “People that play large instruments like tubas and baritone saxophones and double basses have to think through their day; they can’t just walk over to the music room and then walk over to Spangenberg with their instrument,” she said. “They have to plan ahead, make sure they have a car that will take them over, etcetera. It requires a little bit more planning on the student’s part and on the teacher’s to make sure everyone has a way to get their instrument over to Paly.”

For the theater department, which will stage its spring musical, “The Music Man,” at Paly, the entire production is planned around the knowledge that the musical will happen in the PAC. Theater teacher Jim Shelby says that most of the rehearsals will occur in Spangenberg, since only the lobby is being renovated, and the set pieces will be built at Gunn, but the final dress rehearsals and set construction will all happen at Paly. “It’s going to be like building a puzzle, and piece by piece we’ll take [the sets] over there and we’ll assemble it there,” he said. “We’ll be all ready in March and load all our sets, costumes, actors and orchestra into trucks and go over and load in—it’s called loading in—so we’ll have four days to get ready for the show. It’s interesting; we’ll get everything ready here and then go there.” The annual fall show and spring One Acts will not be affected by the loss of Spangenberg; they will continue to be held in the Studio Theater, along with Shelby’s theater classes.

TedX Gunn, a student club which hosts an annual event where they invite students and other community members to give presentations, is another group forced to move to another location to hold their conference. Club co-president senior Callia Tong says that they will hold the conference in Paly’s Haymarket Theater this year. The change in location also affects the time of the conference; it is usually held on a normal school day, but moving to Paly requires the conference to be moved to the weekend. Tong says that she believes that the change in time and location will affect attendance. “Since it is on a weekend, people may have other plans, and since it is also at Paly, people would have to commute farther,” she wrote in a Facebook message. “Some people would think it is too far and would not come.” To encourage participation, Tong says that the club aims to include not only Gunn students, but also Paly students and other community members. “Well, we have broadened our target audience to not only include Gunn and Paly students, but more community members and possibly some Stanford students,” she wrote. “We have a Stanford student speaker, as well as Gunn students so far. Those speakers would hopefully attract peers and family members.”

Tong is looking forward to the conference. “We are excited because [Haymarket Theater] has everything we need to put on a great conference,” she wrote. “Although it does not seat nearly as many people as Spangenberg, we are hoping to fill as much of the theater as possible!”

Looking to the future

Both Lewis and Shelby are eager for Spangenberg’s revamp and the new classrooms. Lewis especially likes the design of the new music classrooms, since the classrooms will be connected to Spangenberg itself. “The biggest thing is that we will literally just be able to wheel our equipment and just walk right onto the stage when we need to, and we’re going to be super close,” she said. “It’s going to save wear and tear on the equipment; it’s going to be easier for us as musicians just to literally get up and walk a couple hundred feet to get into Spangenberg. So it’s going to be very convenient and so we’re really looking forward to that, even though it’s going to take a couple years.”

Junior Maddy Kaplan, who will be part of the tech crew for “The Music Man,” says that she is disappointed she won’t be able to stage a show in Spangenberg, but she is excited for the renovation. “I didn’t join theater until sophomore year when we did ‘A Midsummer Night’s Dream’ in the round on the stage, so other than working on the Choir-Staff Musical, I’ve never gotten to do a show fully in Spangenberg,” she wrote in a Facebook message. “I am really looking forward to seeing all of the changes made to our school in a few years, but it’s sad I’ll never be able to work on a real show with the house and lobby of Spangenberg.”

Stevenson believes the new Wellness Center will be beneficial for students. “When you go to college campuses, there’s often a student center where a lot of those resources are consolidated, and [having a consolidated Wellness Center] will be really helpful, for ease of use, access and privacy for students,” she said.

She says this project will be a stepping stone for future construction projects to build off of. “When we have that additional space, we’ll have some areas that will free up and we’ll have to think about how to relocate things and what other improvement projects and beautification things can happen in the future,” Stevenson said.

Knowing that construction will be frustrating for students, Stevenson says it is important to think about the improvements that will come from the project. “I look at construction as a motto for life: that things are constantly evolving and changing and sometimes change is really difficult, painful and irritating—and construction can kind of be that way—but after you go through it, you end up with a more functional and evolved perspective of our campus which will be exciting,” she said.