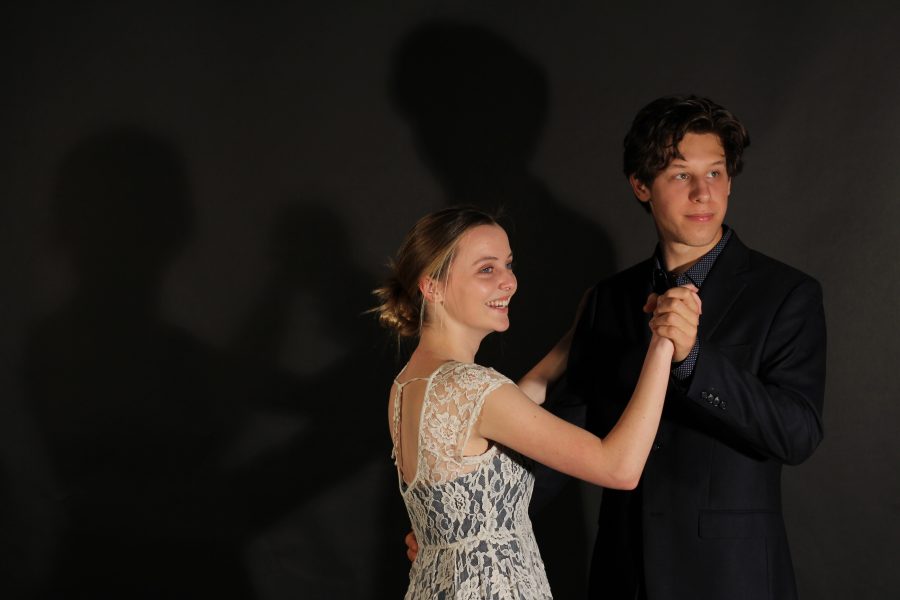 When senior Nick Borbolla heard about the 2015 Broadway play “Constellations” by Nick Payne starring Jake Gyllenhaal and Ruth Wilson, he ordered it on Amazon, read it and immediately fell in love. I have to do this play, Borbolla thought.

Now, his dream has become a reality, and Borbolla is directing his first full-length play, which will be performed with free admission in the Gunn Studio Theater on Friday, Feb. 24 at 6 p.m. and Saturday, Feb. 25 at 8 p.m.

“Constellations,” a play of just two characters and winner of the 2014 Drama League Award, is characterized by its innovative feature of storytelling through multiverse theory—in which there is a hypothetical set of many possible parallel universes. “I’d call it a boy-meets-girl, man-meets-woman love story, but with this really scientific element of multiverse intertwined, where they’ll just meet once across different universes,” Borbolla said. “They meet different times, and their love story goes in different directions depending on what universe they’re in.”

As Borbolla read the play, he started thinking about how his life and our world could be so different in another universe. “I was fantasizing about a world where current events aren’t the way they are, and where all these little things went differently,” he said. “But that in turn made me grateful for the life I do live, and that’s what I love about this play.”

Borbolla enlisted senior Sam Hyrkin, his close friend and theater buddy, who also read “Constellations,” to play the part of the man in the play, Roland.

After the two decided to commit to the project over winter break, Borbolla and Hyrkin started to look for an actress to play Marianne, the female lead in the play. “Since Gunn Theater’s going to go invade [Palo Alto High School (Paly)] Theater in April for ‘Music Man,’ we thought it would be a cool precursor to that to have a Paly actress to play the female part and to kind of bring those two worlds together earlier,” Borbolla said. So, he cast Paly senior Zoe Sego to play Marianne.

In January, the three started rehearsing together at Borbolla’s house every Tuesday night and on weekends. Borbolla would dim the lights, make Hyrkin and Sego some green tea and lead them in a guided meditation. They talked about their days, how they were feeling and how that related to their characters. Immediately, the three delved into the meaning of the play so that they could thoroughly understand the emotions of their characters. “We tore into it, bit by bit, into every single scene and analyzed it to death,” Borbolla said. “And then we took subtext notes to determine what the character was really feeling because what happens in the play is, you see a situation happen, and then it unfolds five different times with different circumstances.”

Later, the three actors moved on to blocking and stage rehearsals. Throughout the process, Hyrkin, who never worked with such a small group of collaborators before, found Sego to be an amazing scene partner. “She’s not only talented, but is always emotionally available moment to moment, which is great, and makes each scene a lot easier to act, not to mention really enjoyable,” Hyrkin wrote in an email.

Borbolla appreciates his cast for using their creativity when playing their parts. “[Hyrkin and Sego] are both extremely intellectual and curious and they’re ready to dip their toes into anything,” he said. “I think they really have a big imagination, and they use that to create their characters and to make them very three-dimensional and exciting.”

To Borbolla, directing is all about asking all the right questions. “I don’t think it’s about dictating your vision verbatim to your actors,” he said. “I think directing is a collaborative process and you have to work with your actors, which is why I’m so lucky to have a two-person cast, so I can really just dive into the play with those two actors.”

Hyrkin categorizes Borbolla’s directing style as very actor-friendly. “He let me and Zoe follow our impulses and develop our characters, but he makes sure we’re taking the show in the right direction,” Hyrkin wrote. “He also has been great with making sure we all see the bigger picture. Sometimes I can get really wrapped up in the details of my own character, so [Borbolla] makes sure that my choices actually make sense with the entire arc of the play.”

As the director, Borbolla has had to make creative risks in lighting, the set, his interpretation of the play and even, in one case, the content. “There’s one scene in the play that’s entirely in sign language, and since two months is just not enough time for two high school seniors to learn sign language, I decided to cut that scene.”

Through the process, the play has been supported by theater teacher Jim Shelby as well as theater teacher Kristen Lo, who is helping with stage tech. Several students worked behind the scenes to make the play possible, as well. Senior Justin Tsin designed the poster for the play and senior Samantha Carlos did the photoshoot. Juniors Kaelyn McFarlane-Connelly and Advait Arun are helping with lights and sound, and junior Zoe McKeown is in charge of makeup.

However, despite the support, the journey has not been free from roadblocks. One challenge was the technical aspect of the play. “First and foremost, I’m an actor. I was never really a lights or sets person,” Borbolla said. “Making the whole vision come to life with the special creative choices I’m making with the lights [is] definitely something that is difficult, in that sense that it is new to me.”

In addition, Borbolla applied for the rights to put on the show legally; however, since another theater company had interest in the play, the rights were not granted. As a result, the show had to be put on as a free, educational play, and the project’s budget had to be reduced from $400 to $100. “I was kind of freaked out,” Borbolla said. “I was kind of discouraged just because that was my big first step and I was ready to get the rights and I was going to have my whole price-discriminating plan….we really had to downscale.”

Ultimately, however, the limited budget allowed Borbolla to highlight the acting. “I want people to be impressed by what you can do with a small budget, and I think it’s a show that’s very focused on the actors and the acting in the play,” Borbolla said.”So I would want people to be astounded about the quality of my actors and the amazing job that they’ve been doing.”

In fact, Borbolla was inspired in part by low-budget plays he saw three people—including Hyrkin—put on his sophomore year. “They put on this play in their backyard with these two garden lights, and they memorized the entire play, they put it on in their backyard, so I think you can really do theater anywhere,” Borbolla said. “If you have a vision, and if you have a text—a play that really touches you and impacts you and you want to see it come to life—I think you can do it with whatever budget you have.”

Borbolla hopes that as a result of seeing his dream carried out, other artists can follow in his footsteps and achieve theirs. “I want people to be inspired to do whatever art they want,” he said. “If they fall in love with a play or with anything and they want to perform it, or they want to paint it, or they want to write it, they should just do it. They should feel the drive within them, and if they really want do something they can just do it. There’s no limitations.”

Borbolla believes the play will elicit feelings of gratitude—the same feelings he experienced when he first read “Constellations.” “I think it’s so easy to get caught up in the big picture that we forget the little moments, and how precious each of those are,” he said. “I think the message [of the play] is even though life can be so much different, you have to take advantage of the life you are living and be grateful for it and be happy about it because it truly is a blessing.”

Similarly, Hyrkin hopes the play will be thought-provoking. “The text wrestles with the idea of different outcomes in different universes; I hope that as they watch the play, the audience thinks about the choices they themselves have made, and what could have been if they had engaged in a slightly different course of action,” Hyrkin wrote. “In a nutshell, the play will hopefully inspire you to think deeply about your life and the decisions you’ve made.”

Borbolla believes the play will be universally enjoyed. “This play makes [science and storytelling] coexist…it makes them work together in a way that I’ve never seen a play do, and it has something for everyone,” Borbolla said.

For Hyrkin, “Constellations” is a different kind of theater than many high school shows. “The language isn’t heightened in any way, the situations are what many people in this day and age experience on a daily basis,” he wrote. “The show is funny and sad and touching, and often all in the same scene. It’s definitely a subtler play than most people are probably used to seeing, so I’m really excited to see how people respond to these two human beings having truthful and realistic interactions on a stage.”

Borbolla and Hyrkin hope that both Gunn and Paly students show up to support their fellow students. “My friends and I have been working insanely hard on this show over the last month and half, and we can’t wait to share this amazing piece of theater with the [Gunn, Paly and Palo Alto] community!” Hyrkin wrote.