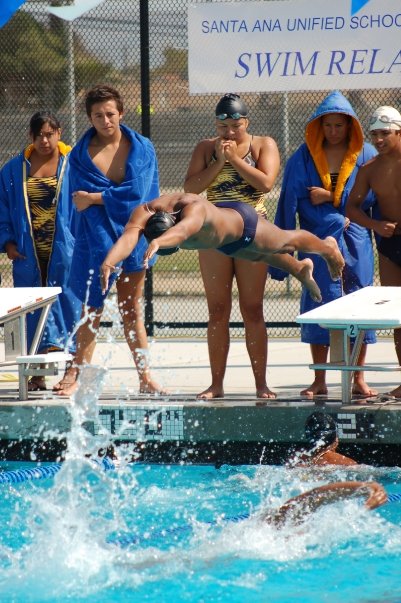 When math teacher Carlos Martinez was in high school, he found his second home in the water. Martinez first started swimming as a freshman at Valley High School in southern California, and stayed on a swim team through his freshman year at University of California (UC) Irvine.

When Martinez started swimming competitively in high school, it was mostly because his parents forced him to. “My parents wanted me to do a sport, and they said that if I didn’t pick one, then I had to do swimming and water polo all four years,” he said.

However, he soon started to enjoy swimming for its own worth. Swimming provided an opportunity to work out and constantly push himself to do better. “Even though we do compete against other schools and other swimmers, it was mostly competing against myself and the clock,” Martinez said.

Being on a swim team provided Martinez with many skills he applies to his daily life. rough swimming, he learned how to overcome difficulties to reach his goals. “It taught me how to continue to persevere and endure, and [that], with effort, I can accomplish what I’m trying to achieve,” he said.

Martinez still treasures several memories from his time in high school swimming. He remembers loving spring break practices when all the other students were on break and the swim team’s daily practices. Usually, the team would play a fun game at the end of practice. Martinez recalls racing to pick up a five-pound black brick o the bottom of the pool. “ The first team to pick it up, take it out of the water and place it on the pool deck would win, he said.

Swimming also provided him with the chance to meet people who changed his life. He met both friends and mentors to look up to through the sport. “A lot of the people that I met in swimming became my good high school friends,” he said. “I had an awesome coach who knew a lot about swimming and was passionate and was a good role model.”

Martinez still keeps in touch with some of his friends from swimming. One teammate remains his best friend, and has even become a close with Martinez’s family “He shows up to all my Thanksgiving dinners, Christmas Eves and days, and New Year’s,” he said.