Board cuts eugenicist ties with vote to rename schools 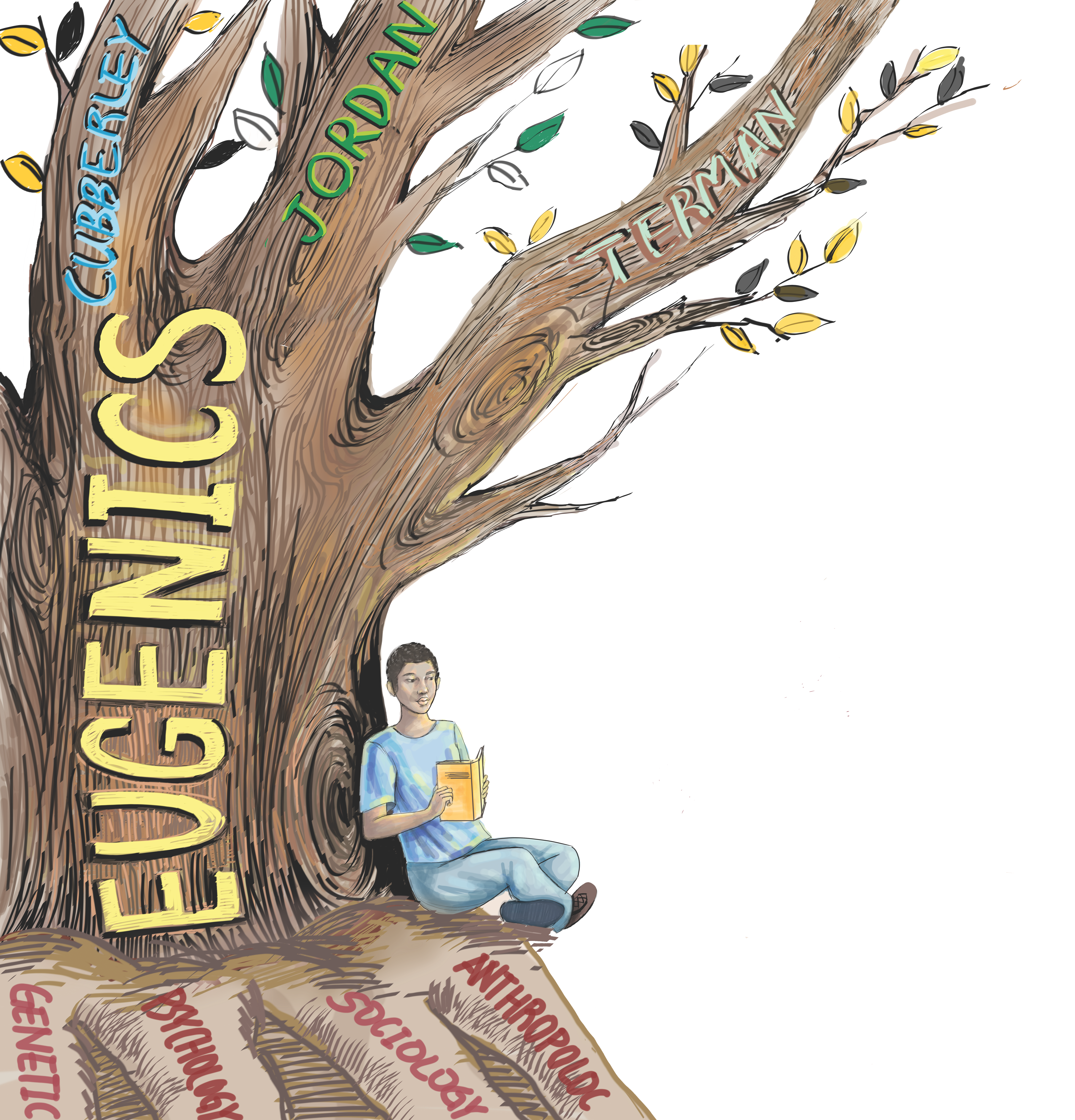 After 17 months of community debate, the Palo Alto Unified School District (PAUSD) Board of Education decided to rename David Starr Jordan Middle School and Terman Middle School in a unanimous vote on March 17. The schools’ names will officially be changed before the 2018-19 school year.

The controversial backgrounds of David Starr Jordan and Lewis Terman, the namesakes of the two middle schools, caused the debate over changing the names. Jordan and Terman were both prominent figures in the eugenics movement, which supported selective breeding and forced sterilization in order to protect the Nordic-American ethnicity. An advisory committee will select alternate names for the schools before Jan. 1, 2018. Part of the board resolution includes creating a secondary school curriculum about California and Palo Alto’s roles in eugenics.

David Starr Jordan Middle School was opened in 1937 and named after Jordan, who was a prominent eugenecist scientist and Stanford University’s first president. When it opened in 1958, Terman Middle School was named to honor educational psychologist and eugenicist Lewis Terman. In 2003, the school adopted the name Terman Middle School to honor both Lewis and his son, Frederick Terman, who was influential in the development of Silicon Valley as a Stanford provost.  Jordan helped found the Human Betterment Foundation, which promoted forced sterilization, while Lewis Terman was active in the American Eugenics Society, which promoted “racial betterment.” Twenty thousand of the 60,000 people forcefully sterilized in the U.S. were sterilized in California under a 1909 eugenics law.

Lars Johnsson, a Jordan Middle School parent, began the petition to rename Jordan Middle School in Nov. 2015. Johnsson said that he first learned about Jordan’s eugenics activities when he read his son’s report on Jordan. “[My son] was wondering how somebody like David Starr Jordan, who has a lot of accomplishments, but who also had a very dark side with his eugenist tendencies, [could have a school named after him], especially in this day and age,” he said.

The Board of Education created the Renaming Schools Advisory Committee (RSAC), comprised of students, teachers, parents and community members to review all of Palo Alto’s school names, investigate Jordan and Terman’s involvement in eugenics and recommend whether Jordan and Terman should be renamed. Thirteen people volunteered to join RSAC and they met from Apr. to Dec. 2016, when they submitted their report to the Board. RSAC presented their findings to the Board at a board meeting on March 7, where many community members argued in favor or against renaming during the open discussion session. The Board made their final decision on March 17.

Superintendent Dr. Max McGee says he supports the School Board’s decision, even though he previously only supported completely renaming Jordan. “My original recommendation was not to rename Terman, only to make it clear that it’s Frederick Terman Middle School,” McGee said. “So, I would not be opposed to renaming Terman ‘Frederick Terman Middle School’ to distinguish between Louis, who I think had a prominent role in eugenics, and Frederick, who did not.”

McGee believes that Jordan’s avid support of eugenics is not something the district can overlook. “It’s not just that he believed in eugenics, but he really actively promoted it; he funded it, he used the power of his office to further the idea of racial cleansing [and] forced sterilization,” he said. “I don’t think that’s a good example for students. I don’t think that’s something to which we aspire.”

Board President Terry Godfrey supported renaming both middle schools because she believes the district has to uphold students’ principles. “We want the names of our schools to represent the values of the students in the schools,” she said. “It seemed like an obvious idea for us to make our students feel safe and welcome; [these are] places where they’re going to learn every day. And so we voted to rename both schools.”

Opposition to the decision

RSAC member Stan Hutchings opposed the committee’s decision, saying it was not carefully analyzed. “I was against renaming the schools because of the financial impact, and also because the arguments to rename the schools were not logical or rational—they were emotional,” he said. “They were also based on a kind of political correctness.”

Fellow RSAC member Mel Froli also believed the committee was biased toward renaming. “The majority of the members on the team were in favor of the change, so the vote of course went to renaming schools,” he said. “I think the committee was poorly formed—there was no attempt to bring balance… I felt that from the very start. It was not a very coordinated effort to really get the facts. I think [the direction we were going to go in] was almost determined ahead of time.”

Froli joined the committee to bring up the history behind Jane Lathrop Stanford Middle School’s (JLS) name: a name change that he says significantly impacted the school. In 1985, Ray Lyman Wilbur Junior High School was renamed JLS when another Palo Alto high school merged with Wilbur. Froli said that he and other students felt the name change was made to appease the newcomers from the northern part of the city. “They wanted kids to feel like it was a new school so they said, ‘Let’s change the name,’ and in doing so, the Wilbur kids lost their identity,” Froli said. “The staff was very divisive, and it was that way for five years until Jordan reopened.”

Froli said that changing Wilbur’s name caused the Wilbur students to lose their school culture, which is why he opposes renaming schools, fearing Jordan and Terman will face the same problem. “It was not a happy time,” he said. “Students resented some of the things that were going on, and our traditions were somewhat lost.”

Hutchings also believes that the Board’s decision will not properly address the issues PAUSD middle school students face. He said that he found it hard to believe that changing the names would have a big effect on the students, or that the students would feel much more at home in a school with a different name. “There was no evidence or metrics given to support the assertion that changing school names would improve students’ academic experience significantly more than other programs already in effect,” he said. “It’s my opinion that it’s not the school’s name affecting the students’ experience—it’s the attitude of the staff and the fellow students.”

Hutchings feels the renaming of the schools is hypocritical because other PAUSD schools will retain the names of figures that could also be objectionable, like the namesake of Walter Hayes Elementary School. “They’re asking to rename two schools because they don’t agree with the opinions of Jordan and Terman,” he said. “I think that it’s really painful that they are going to abuse scientists for having their beliefs, but are not going to similarly abuse a Presbyterian minister [Walter Hayes] for promoting beliefs that are contrary to science and to the religious beliefs of many other people in our community.”

The issue with costs

Renaming Jordan and Terman will incur expenses to remake signs and alter gym and athletic uniforms, among other changes. Hutchings opposed renaming because of the financial impact. “I am afraid some of the more valuable programs will be sacrificed in order to rename the schools and also I do not believe that renaming the schools will bring a greater benefit to the students than the programs that are going to be sacrificed,” he said.

Hutchings believes that the negative financial impact on the school district outweighs the benefits of renaming, especially since he believes the cost will be substantially greater than the district estimate. “There is no maximum amount that there is going to be dedicated to this. Some of the people said, ‘Cost is no object, it doesn’t matter what it costs; we must do it,’ and I find that very financially irresponsible,” he said. “The RSAC did their own calculations and said it was only going to be $50,000 for the schools; however, their calculation only included the cost in the schools, not to the other entities which will be affected and have to change the school to something else.”

McGee suggested that community members could also fundraise to cover the renaming costs. “Frankly, I think we ought to get some private funding for this,” he said.

Terman Principal Pier Angeli La Place says that the Terman community has generally been supportive of the name change. Both the Site council and the Parent Teacher Association Executive Board wrote letters of unanimous support for changing the school name. “There was [also] a lot of discussion among the staff, and the staff took a survey—an anonymous survey—and 75 percent of the staff who responded wanted our school to be renamed,” she said. La Place added that, after discussions about eugenics, Terman students felt their school should be renamed as well.

Froli, however, says that in his interactions with students, he has found that many do not support renaming. Froli, who works with athletes at both high schools, said most students he asked did not know about the issue. “Most had no opinion, but the way it’s presented by the advisory committee, it’s as if every student was in favor of the name change,” he said. “One Terman graduate said, ‘It’s not Mr. Terman’s school, it’s my school.’ And [a Jordan graduate] said, ‘At Jordan, we didn’t call it David Starr Jordan, we called it Jordan Middle School. So, why not just drop David Starr if that’s a problem, and continue to call it Jordan.’ And I was in favor of that compromise.”

La Place believes the name change issue is not just about the name, but also about community voice and school culture. “I think the larger, less tangible impacts have to do with our community coming together, and being able to invest the time and the energy in talking about the values of our school, and what makes Terman, Terman, which is so much more than a name,” La Place said. “There’s a sense of loss, for some community members, and I want to acknowledge that.”

Considering California’s significant role in the eugenics movement, McGee believes it is imperative for students to learn about the history of the practice and have the tools to craft their own opinions about it. He wants PAUSD students to learn about Palo Alto’s connection with eugenics in a new curriculum. “California was a leader in the country [for eugenics],” he said. “David Starr Jordan did have a part of this, and if his actions and philosophy were perverted to the extent that they were used by the Nazis or others to justify genocides, or sterilizations, we ought to know about it.”