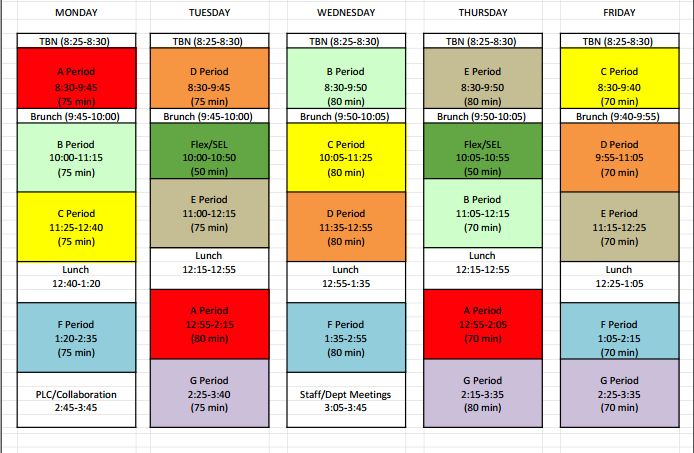 On Tuesday, March 28, Principal Dr. Denise Herrmann officially released the new schedule for the 2017-18 school year via Schoology. The new bell schedule will maintain the same schedule as this year with the exception of the optional Thursday Tutorial, which will be replaced with a mandatory mid-day Flex Time on Thursday to accommodate for Gunn’s instructional minute deficiency and Social-Emotional Learning (SEL) curriculum.

When Herrmann first announced that the bell schedule would be changing, many students expressed concern that administration wouldn’t include enough student voice.

On Sunday, March 12, junior Advait Arun and 21 other students authored a petition calling for administration to recognize student voice, proposing an alternative bell schedule to the one planned for next year and claiming that administration once again failed on its promise to incorporate student input into the decision. The petition currently has over 550 supporters.

This petition is not the first to claim that administration has neglected student voice: there has been a consistent lack of trust among students in administration, especially after last year’s AP testing, the weighted GPA issue and the constant schedule changes, which were all mentioned in the petition.

Arun, a member of the Creative Scheduling Committee, says the group of students came together over their dissatisfaction with the overall process of the schedule change. “Our general logic for the petition is not to say no to the change but it’s simply to say, ‘We have a voice, [and] we have an opinion; let it be heard and let it be expressed,’” Arun said.

The petition’s proposed solution is to move the required Flex Time—which will be used for the new SEL program—from the middle of the day on Thursday to the end of the day on Thursday. However, according to Herrmann, research has shown that having SEL in the middle of the day is the best option due to the break it provides between academic courses. “Is [the proposed solution] an option? It could be, but we would be going against what research says is best practice and so I just don’t feel very good about that,” Herrmann said. “We can’t find anyone [or any research] that says that putting it at the beginning or the end of the day is really a useful time for students to either do academic or social-emotional work.”

However, while many students are upset by the bell schedule change, Wellness Commissioner junior Vidhu Navjeevan feels that the current call for student voice may be an issue of miseducation on the part of the administration rather than a lack of student voice. For example, as a member of the SEL Committee and Student Executive Council, Navjeevan felt that she was well-informed on the process and reasoning for the bell schedule change, but that her peers were not provided with the same information as her. “There are specific reasons why we can’t have tutorial anymore, such as instructional minutes,” Navjeevan said. “If the majority of the student population doesn’t know that though, it becomes this big issue. I think the real issue is that there is a lack of communication between admin and students, and I think that’s a bigger issue than student input because it’s being incorporated—students just don’t know how.”

With current juniors now having to undergo four schedule changes in their four years, Herrmann under- stands students’ frustration. However, Herrmann believes that this will probably be the last bell schedule change in a long while. “There are a lot of students [who] are saying, ‘We already had three schedule changes; we don’t want another one,’ and I completely agree,” Herrmann said. “That’s why I’m making sure that the one we’re picking right now is something that we can grow into and not something we have to change in three, five or who-knows- how-many years.”

Ultimately, though Arun is an advocate of moving mandatory Flex Time to the end of the day, his goal for the petition is to make an impact on more than just next year’s bell schedule. “The win for everyone would be the administration saying, ‘they’ve got a fair point, we like their argument and we think they have a legitimate reason for going for this kind of change,’ and also accepting what we think is a fair schedule change,” Arun said.

According to Herrmann, the bell schedule change is occurring next fall particularly because the implementation of a four-year SEL program was an action plan item recommended by both the school board and Western Association of Schools (WASC).

Next year, WASC will make another visit to Gunn; however, Herrmann insists that the process of changing the schedule was not rushed because of this. “I think people aren’t realizing this had been an ongoing dialogue since November,” Herrmann said “Four months to make a decision like this collaboratively is a long time. We did this in eight weeks when we made the original bell schedule change.”

Because the schedule is changing in part due to SEL, many students have chastised the need for SEL on campus, as well. “Since there’s a lack of communication, students feel like they aren’t being heard, so it kind of blocks all of the positive stu ,” Navjeevan said. “And because of all this controversy, SEL has been directly linked to it, so people are saying, ‘ is is happening because of SEL, so I don’t want it.’”

However, Navjeevan believes that having SEL is critical to further prioritize mental wellbeing at Gunn. “I think [the new bell schedule] will be beneficial. It’s just the loss of tutorial that will not be beneficial to students, but that’s necessary to take away,” Navjeevan said. “The fact that [SEL] is being incorporated into our schedule means it is just as important as academics, and I think that’s really powerful.”

According to Herrmann, only about 10 percent of students currently attend tutorial. While she recognizes that some students enjoy the small-group feel of tutorial and that it will be a loss, she feels that having a Flex Time instead of tutorial can benefit the larger student population. “Because [10 percent] is such a low percentage, most students aren’t having that much access to their teachers,” Herrmann said. “I want to make sure that, as students needs grow, we’re also building in more academic Flex [Time] along with more social-emotional learning.”

Herrmann also noted that the school board was not aware that teachers were teaching such a small number of students. “In terms of investment of tax- payer dollars, that was a big ‘Aha!’ for them, because we are paying all these teachers to be on campus, yet they are only really working with maybe three to ve students in an hour,” Herrmann said. “Because we are a public school, we have to make sure we are using our resources to serve as many students as possible.”

Because more days will be longer with the new bell schedule, which can be an inconvenience for student athletes, administration will be accommodating more students who need G period prep or G period P.E. There will also be more sections of G period P.E. next year, according to Herrmann.

Ultimately, however, Herrmann’s goal with the new bell schedule is to increase student wellness. “From the experience I’ve had being principal at this school where we’ve lost so many students and where we continue to have students who are hospitalized due to suicide ideation and depression, [it’s clear] that significant problems still exist on our campus,” Herrmann said. “I’m going to continue to advocate that we value student wellbeing and student social-emotional learning just as much as we value academic learning. And I know that sometimes that’s not popular, but I do think that’s part of being a good leader—[it’s] looking to the research, looking to the data, listening to all voices and then, even when it might not be popular among a group of your constituency, still moving forward.”