Senior Jane Ahn places in top 50 for math in U.S. 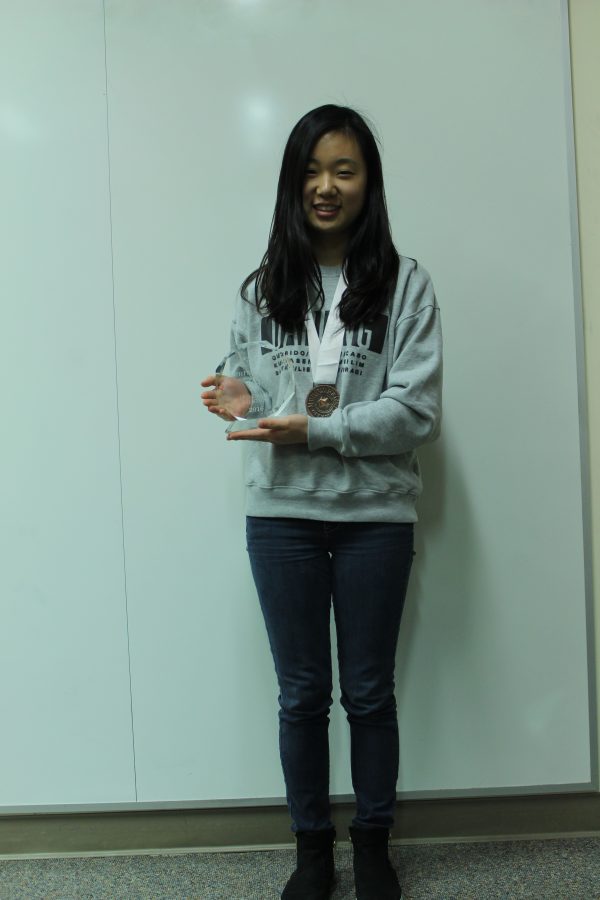 A combination of both passion and talent can go a long way, and for senior Jane Ahn, this certainly holds true. Ahn currently holds a spot in the top fifty for math in the nation. It began in middle school; Ahn was met with the opportunity to join the Jane Lathrop Stanford Math Counts team as she approached sixth grade. “I took the test and made it on the team, and ever since I’ve been participating in school-related math competitions.” Middle school provided Ahn with a solid background in math and was what sparked a passion that follows her to this day. “I was on the Mathcounts team for all three years in middle school, and when I came to high school I just kept doing math and now I’m part of the Gunn math circle ,” she said. “I’ve competed in all sorts of math competitions throughout all four years of highschool and do up to this day.” Over the years, Ahn’s interested in math has also grown. “I can say that math is my favorite subject because I like the math classes I took at Gunn and also just studying for math on my own outside of school,” she said. She has also taken time over the years to branch off to higher levels of math. “I’ve taken many classes outside of school on my own so I’ve gotten the chance to study concepts such as abstract algebra, group theory, linear algebra, multivariable calculus and other things that follow BC Calc,” she said.

Between studying, summer programs, and classes, math has become a very important role in Ahn’s day-to-day life. “I spend a lot of time doing math during weekdays, and I go to different kinds of math circles,” she said. “During weekends, I meet up with a group of friends and form study groups and over the summer I go to different mathematics camps.” Math has been not only a source of challenge and enjoyment, but also a way for Ahn to meet new friends from around the world. “I’ve met a lot of friends through math,” she said. “It’s really nice to meet other people who are so passionate about math, and it’s cool that when we talk we both share such a common interest.”

Ahn’s major involvement and background in arithmetic paves the way for a vast future in the field of math and science. “Right now my plan is to major in math and computer science in college which I’m really excited about,” she said. “There I’ll be able to experiment more with different kinds of mathematics and maybe figure out which type of math I really like.” The difficulties of her goals have also made the outcome feel more successful. “When I made MOP my junior year (Mathematical Olympiad Summer Program), a camp that invites the top 50 scores USAMO every year, and it’s a really prestigious camp and hard to get into,” she said. “I’d prepared for so long, and when I actually made it I was so happy, it was actually one of my proudest moments.”

The important figures in Ahn’s life have played major roles throughout the course of her math development, especially her math teacher. “The first person that actually got me doing math was Mr. Herreshoff, a math teacher here at Gunn,” she said. “He kind of inspired of inspired me to pursue it.” Ahn has found that the skills she picked up in math are also beneficial in other subjects as well. “Doing a lot of mathematics has helped me a lot in theoretical computer science because the two are closely connected, and it’s also made different kinds of sciences such as physics easier to pick up,” she said “The creative skills you need to use to solve problems is useful for any situation really, I find math skills usually always help.” To all those who struggle with math, Ahn has some tips based off her experiences. “This might sound like a really generic answer, but I think the most important thing is to like what you learn so if you don’t enjoy math just try to at least understand it and keep studying,” she said. “Keep building up all your skills, and it should work out in the end.”