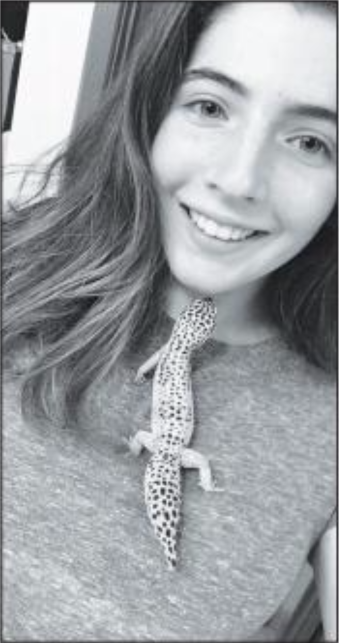 We often see geckos on television through the green gecko with the British accent portrayed in GEICO ads. Sophomore Jenna Kaplan has a gecko of her own—and she looks nothing like the GEICO Gecko. “The GEICO gecko’s green and spotted—not spotted, but splotchy,” Kaplan said, describing her leopard gecko, PJ, a sandy yellow reptile with a smooth black spot pattern. “PJ’s much prettier. Also, my gecko is not British. Leopard geckos are actually from Afghanistan and northern India.”

Though Kaplan went through a guinea pig phase at one point, she says, it was always reptiles. In seventh grade, she ran the Snake Club, where she became really interested in reptiles, especially snakes, but Kaplan’s mother is deathly afraid of snakes. Last fall, Kaplan finally convinced her mom that leopard geckos are a lot easier to take care of than a dog, and she finally got her wish.

PJ was adopted from the Humane Society in Burlingame over Thanksgiving break. Originally, Kaplan was planning on adopting an additional gecko, Spot, but was told that the two pets could not be housed together due to their history. But when she adopted PJ, Kaplan was ecstatic. “I think that I spent the first day that we got her in my room for eight or nine hours just watching her, taking photos, putting my hand in, because she didn’t let me pick her up initially, I had to work up to that, so I would read her stories, I would read her my chem textbook, all sorts of stuff, just to be around her,” she said. “And it’s sort of chilled out a bit now. I don’t spend quite as much time with her, but every time I see her I get happy, just knowing that she’s there and that I finally got my wish of having a pet.”

Kaplan initially spent around $300 on the terrarium and supplies, and though the cost of food can add up, she bought 2000 mealworms for $11 and started a colony in her bathtub. Kaplan particularly enjoys hand-feeding PJ—it’s how she bonds with her considering that she can’t do things like cuddle with her. “I’ll put the mealworm in my hand and she’ll come over and eat it,” Kaplan said. “She’s mistaken my finger for a mealworm a couple times, but, I mean, she doesn’t have teeth, she just has a hard jaw, so it’s not too painful.”

Other than feeding, Kaplan says PJ is pretty low-maintenance. “Every night I take her out for anywhere from 15 minutes to an hour, and as long as she stays warm during that time, it’s totally cool if she just hangs out on my leg or on my bed, but every other night is her feeding night, so I feed her anywhere from five to eight mealworms depending on how hungry she is,” she said. “Other than that, it’s pretty much no work. I have to clean her terrarium once a week, so every Saturday I just change the lining, and spray her towels every evening to keep her moist. That’s pretty much it.”

In addition, PJ sheds her skin once every one or two months, but since PJ eats her own skin, Kaplan’s role is minimal. She takes care of PJ’s toes with care since she was abused at her last home. “She was starved and they didn’t take care of her properly, so she has some stunted toes, so now, whenever she’s shedding, I have to give her warm water baths and then manually take off her skin from her toes—otherwise it’ll constrict, she’ll have blood loss and lose more of her toes, so that’s just a little bit of extra care that comes with it, but I don’t mind, and I like being able to hold her and do that for her,” Kaplan said.

Some of Kaplan’s favorite traits about PJ are her adorable tongue and chill vibe. “Her tongue is adorable,” she said. “She’ll lick her own eye. She’ll lick her mouth. She’ll lick her fingers. She’ll lick my eyelid. I also really like that she’s just pretty chill, like I can put her on a bed or put her on a computer, and leave the room to brush my teeth or something, and I know that she won’t run, like she’ll just kind of sit there and watch me.”

Though PJ is Kaplan’s pet and she is the primary caretaker, the rest of her family loves the gecko, who is considered part of the family. “She lives in my room, next to my window, but because of that the room has kind of become a family room and everyone’s welcome to come in and play with her,” she said.

Kaplan’s sister reads Greek mythology to PJ some nights. And her dad, she says, loves PJ almost as much as she does. “He spends all of his time with her at home, sorting through the mealworms and making sure that she’s well fed, and [he] plays with her,” she said.

Kaplan’s mother, too, was pleasantly surprised by how cute PJ was. “The issue was she initially thought that she would look too much like a snake, but she said that as long as she’s sideways and she can see the legs, it’s okay,” Kaplan said.

PJ has given Kaplan lots of cute stories to tell. “I was playing with her on my floor, and I had my slipper out, and she climbed into my slipper and wouldn’t leave because it was like a warm, dark cave,” she said.

In another instance, Kaplan was watching “New Girl” on her computer on her bed, and PJ was hanging out on her stomach. “Then they had a picture, I don’t know what it was, it was some sort of reptile thing, and she just perked up, turned her head, and then stuck out her tongue, and it was really cute, and she came over to the TV screen—or computer—and tried to crawl up on it,” Kaplan said.

And most recently, Kaplan brought PJ into a room where her sister was Skyping her probable college roommate. “PJ made a leap onto her lap, so then my sister dropped her phone and then we had to scramble to pick her up before she ran away or something,” she laughs.

Though Kaplan has always cared a lot about animal rights and animal welfare, having a gecko of her own has opened her eyes not only to the atrocities, but also the good things that happen. “I’ve become more aware of where they buy my food or supplies because I don’t want to support industries that abuse the geckos, like Petco,” she said. “But it’s also made me a lot more positive. I’ve joined some groups online where people just post pictures of their geckos and other lizards, and it’s just brought me closer to the entire reptile community.”

All in all, Kaplan believes that having PJ has been a very rewarding experience, and would even consider adopting more reptiles in the future so PJ can have a family. Though she’s never had a traditional pet like a cat or a dog, she loves PJ. “I have this adorable little gecko who every time I come into the room perks up and comes over and looks at me, and she’s not really cuddly in the same sense, but I think it’s just as rewarding,” she said. “Any time I’m feeling stressed or feeling down, I just go and pick up PJ and she just looks at me with her all-knowing eyes.”

So if there were one word for Kaplan to use to sum up her experience, it would be happiness.