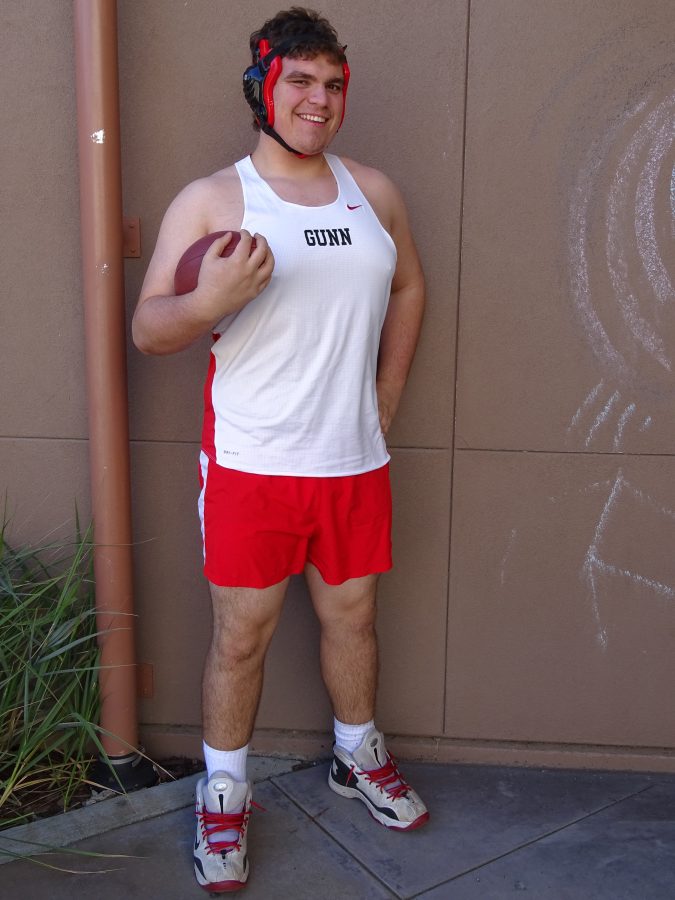 Playing a sport is a difficult task: the combination of physical exertion and time consumption can be a major commitment in the life of a student. However, some accomplish the incredible feat of participating in a sport for all three seasons during the school year. Senior  Andy Maltz is one such example—he plays football, wrestling and throwing for track and field at Gunn for all three athletic seasons.

While it can be difficult to balance sports and school, Maltz is grateful that he has multiple extracurricular activities going on at all times. “When it comes down to it, there’s no rest for the weary,” Maltz said. “It really helps with my time management because there’s all sorts of things you have to juggle.” With the combination of football, wrestling, and throwing taking up a majority of his time, Maltz has adapted his life to accommodate for his athletic time commitments.

Playing three sports would seem like it causes unwanted stress, but for Maltz it is just the opposite. After a long day of school, there’s nothing he enjoys more than throwing someone on the wrestling mat or making a tackle at football practice. “It’s almost relaxing to [do] the sports. At the end of school, you’ve gotten out of eight and a half hours of working, and it’s a chance to take a break,” Maltz said. In addition to loving the exercise, Maltz dedicates his time and effort to athletics for the camaraderie it fosters. “I have made a lot of my greatest friends at practice, and they are athletes as well, so we all enjoy being there,” Maltz said.

For athletes such as Maltz, sports plays a significant role in their lives. Many athletes only need to plan around practices for one season a year. However, Maltz is forced to learn valuable life skills due to the fact that he has three seasons of athletic work. For instance, Maltz believes that he owes his time management skills to his athletic ventures. Each day presents new challenges, but by balancing his time, Maltz is able to thrive. Maltz attends at least two hours of practice a day and still remains a dedicated student. Although being a triathlete isn’t easy, Maltz believes that every day he comes out stronger. Part of the reward for him is knowing that every time he is competing, he is improving. “It’s exquisite pressure, and under pressure you are able to do great things,” Maltz said. “Pressure forces you to balance all of this together at the same time.”