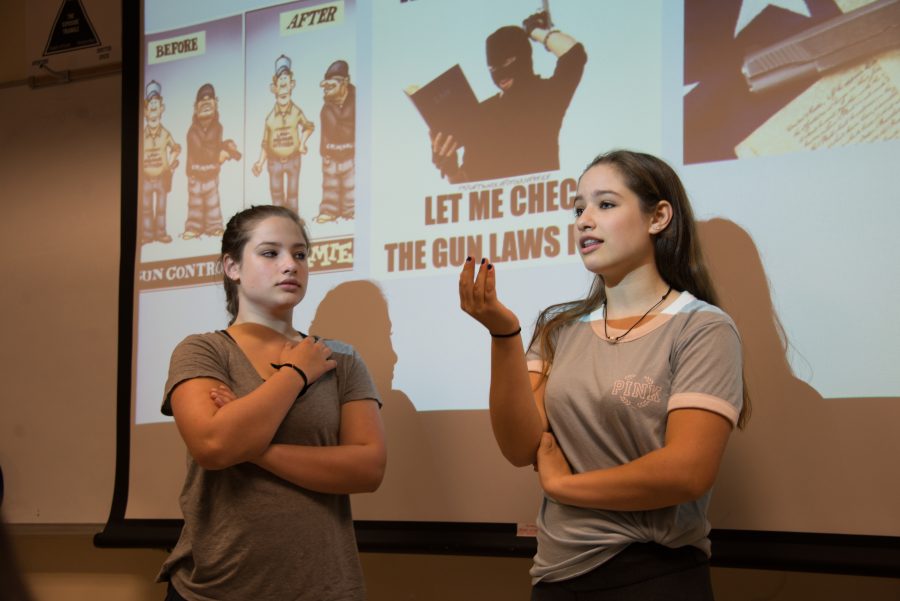 In a primarily liberal community, students whose political views are in the minority may feel alienated or uncomfortable expressing themselves for fear of being discriminated against. To maintain a safe environment for students on all ends of the political spectrum, seniors Avital and Valerie Rutenburg run the Conservative Club as co-presidents.

The club was started by the Rutenburgs’ older brother, Daniel Rutenburg. the sisters decided to continue the club once he graduated to preserve the safe political space. “We thought it would be important to have a place at Gunn where conservatives and liberals alike, and just anybody on any area of the political spectrum, can come and share views and have an honest and real discussion,” Avital Rutenburg said.

Both sisters have experienced uncomfortable situations in the classroom where teachers expressed their political bias, and they saw the need for a place for both themselves and others to feel safe and accepted. “The sad reality is that teachers do judge you based on [your political views], so I needed an outlet and [the club] was definitely a place I [could] go to,” Valerie Rutenburg said. “For me in class, I’d feel really frustrated and feel like I want to blow up, but I didn’t want my grade hurt.”

For Fall Clubs Day this year, both were pleasantly surprised by the substantial number of sign-ups they received, although some members remain reluctant to actually show up to meetings. “I do see them kind of hesitate and hover around the door before they walk in,” Avital Rutenburg said. “At the club, even though I know that we’re talking about something that they have opinions about, they’ll be very hesitant to raise their hand, but once they do get into it, I notice that they’re finally able to share their opinions.”

Despite the name of the club, people of all political backgrounds are welcome to join. In fact, a majority of the club is comprised of Democrats or center-leaning individuals. “There are just so many different flavors of political opinions, which is what I love because there’s just a bunch of open-minded people who love discussion and want to be exposed to the other side,” Avital Rutenburg said. “[They] can see the actual image of a conservative rather than just this abstract idea of what a conservative is.”

Conservative Club was not created with a goal of converting people to a different political view, but rather to shed light on the beliefs of people on different areas of the political spectrum and gain an appreciation for alternative perspectives. Senior club member Roark Sweidy-Stata puts emphasis on the value of gaining exposure to other political views. “I just think only reinforcing your own opinions and beliefs isn’t a good way to convince other people that you’re right,” she said. “You need to hear the other arguments so that you can form your opinion better.”

During club meetings, a current event is brought up and a small debate is held regarding the topic. For the first meeting, club members simply went around the room discussing conservative values and topics like freedom, equity and equality. “Everybody had different opinions, but we all had a good discussion and everybody was able to contribute without [being attacked on their political views],” Sweidy-Stata said.

One of the fundamental values of the club is to have a safe, unbiased environment for people to discuss their political beliefs. “I think that it’s important to have some healthy debate and definitely have certain disagreements or contentions,” Valerie Rutenburg said. “I think it’s important to have some disagreements, and [that] we walk out without any personal hostilities towards anybody because of their beliefs.”