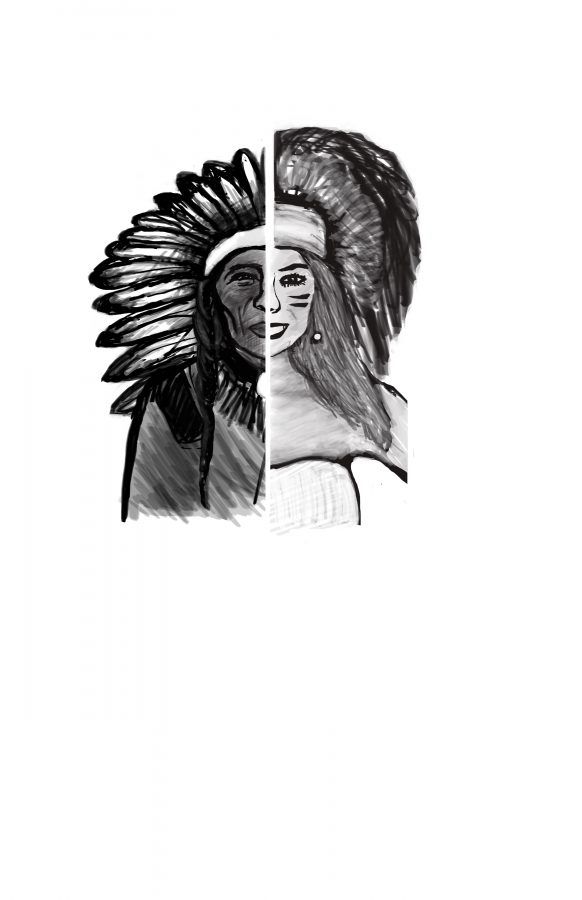 Halloween is coming up. All over, party stores are popping up, stocked with the usual costumes: black cats, witches, ghosts, skeletons and… terrorists? Native Americans? Although Halloween was initially a religious holiday meant for remembering the dead, it has since evolved into a holiday of fun and jokes.

Modern day Halloween is a holiday where everyone can become someone else for a day. It is also, unfortunately, a holiday often used as an excuse for cultural appropriation. Cultural appropriation is de ned as using or taking elements of a culture that is not one’s own for fun or for proffit without showing any understanding or respect for the culture. Most people who choose these costumes do so without a deliberate desire to offend, but they can seriously demean and misinterpret the values of these cultures by using them as elements of a costume. It is crucial for people to stay mindful of the effect their costumes are having on others and steer clear of cultural appropriation in their dress in order to make Halloween a fun holiday for everyone.

Using traditional cultural attire as something to wear for fun shows a disregard for the origins of these costumes. The Native American feather headdress is a common example of a culturally appropriating costume. For Native Americans, the headdress holds great ceremonial value and is given only to those who are greatly respected in the community, according to the American Indian Heritage Foundation. Each feather in the headdress is earned through the completion of an exceptionally brave deed. Wearing it as an element of a costume treats the culture flippantly. The message behind these costumes seems to be that the culture doesn’t matter and that the wearer is allowed to use it for their own amusement. In reality, it is an important element of other people’s identities.

Students at Ohio University illustrated this idea in their “We’re a
Culture Not a Costume” campaign, which has since spread to universities all over the country. They put up posters all over their campus featuring students
with culturally appropriating costumes, including students dressed as stereotypical interpretations of Native Americans, Geishas, Gypsies and other cultures. The posters sported quotes such as, “You wear the costume for one day, I wear the stigma for my life.” Wearing culturally appropriating costumes on Halloween furthers misinterpretations and stereotypes of cultures and traditions.

Additionally, when individuals from majority groups dress up as minorities, they show a disregard for the struggles these minority groups go through. They dismiss these struggles as insignificant—something to try on and then leave behind. However, many people from the cultures that are commonly used for costumes live their entire lives dealing with stigma and oppression. This stigma comes from the stereotypes perpetrated by such costumes and other actions of majority groups. For example, people of Islamic heritage are often stopped at airports and forced to go through additional screening when there is no reason to suspect that they have done anything wrong. is prejudice is caused by negative stereotypes associated with the culture and is o en spread by actions such as dressing up as a “terrorist” for Halloween. A person in a culturally appropriating costume is o ending those around them in the short term and spreading these stereotypes in the long run.

Some people may say that Halloween is a day to pretend to be someone you are not, and that cultural costumes are worn “all in good fun.” After Yale University sent a letter to students in 2015 that asked them to refrain from wearing culturally appropriative costumes, faculty member Erika Christakis wrote an email condemning Yale’s faculty for their advice on Halloween costumes. She saw this as a limitation on students’ freedom of expression and obstructing them from enjoying an innocent, fun tradition. Her letter resulted in backlash from students who felt they were unwelcome on Yale’s campus, especially after Christakis and her husband refused to apologize for their stance. This story shows, yet again, that culturally appropriating costumes can take away from the fun of Halloween. Although the wearer may not seek to offend, they are ruining the night (and, perhaps, subsequent days) for other students. It is very simple to go with a less offensive choice, and there is no reason to choose a costume that will make the holiday less fun for someone else.

All in all, in order to make sure that Halloween is an enjoyable holiday for everyone, it is best to refrain from wearing costumes that appropriate other cultures. Although it may be difficult to draw the line between what is acceptable and what is offensive, it is generally best to err on the side of caution. If the costume originates from a standpoint of genuine understanding and appreciation, it may be fine, but if there is any gray area, it is best to refrain from wearing the costume. Even the most appreciative costumes can sometimes come off as offensive when worn on the joking holiday that Halloween has become. So, when in doubt, don’t wear it. Instead, try to find something from an extinct culture, something fictional or something traditionally spooky. Maybe it would be best to go with a different idea this year.