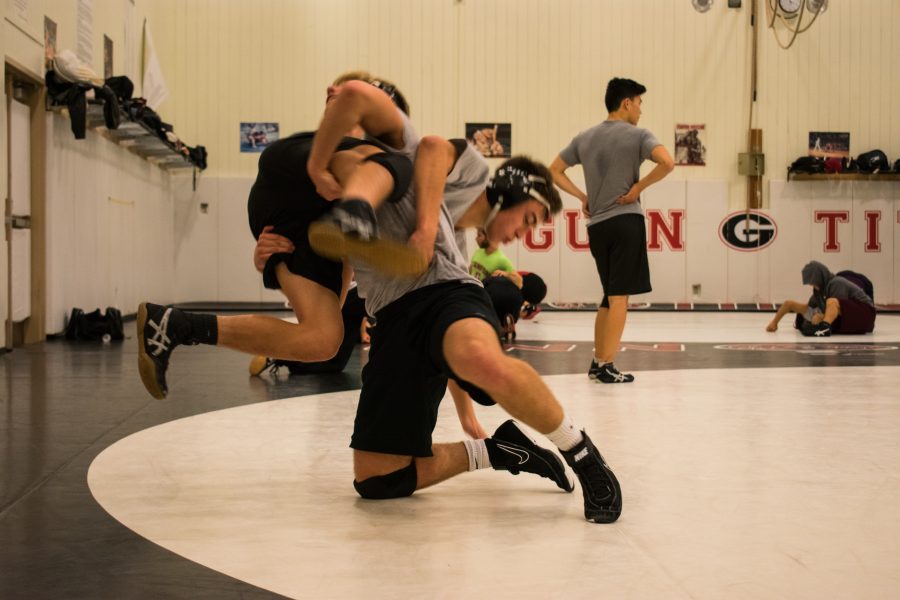 The weather is growing frigid, but the friendly competition is heating up on the mats in the Gunn wrestling room.

This year, wrestling is coached by Eric Cramer, Ian Cramer, Blaze Lee, Dennis Chan and Glenn Smith, all Gunn alumni. All wrestlers can receive one-on-one coaching from these five coaches during each practice. “I really like our new coaching staff because there are a lot of them so they focus on everyone, rather than specific people, and they also teach you everything they know,” junior Kayla Lin said.

As the team has a title to defend, head coach Eric Cramer has high hopes for his team to succeed in tournaments and dual meets. “Most importantly, I want to see our team improve throughout the season and capitalize on our potential,” he said. “Everyone on the team has the ability to do well in the sport, and I want to help everybody get there.”

A typical practice consists of a 15-minute warm-up and 30 minutes of old drills, followed by new techniques and live wrestling at the end, according to senior Eric Wei. “After live we cool down and stretch, and then end with a few updates and inspirational words from our beloved coaches,” he said.

Senior Travis Haro advises athletes who are new to the sport of wrestling to go in with an open mind and have fun. “You’ll have a great time and will bond with everyone on the team,” he said. “No one ever gets on you if you lose or make a mistake; everyone always tries their best to bring you up or help you out so that you come back the next match better than before.”

According to Cramer, there are several team activities that bring the athletes closer together, such as playing games during warm-up, and doing a “primal yell” before a meet to help get them excited for their wrestling matches.

Although wrestling is an individual sport, Wei describes the team as a close-knit family. “Everyone eventually gets to know each other throughout the season, and through our special team bonding activities,” he said. “After we have a dual meet or tournament, we usually go out for pho and have a good time.”

The season has already begun, but it is not too late to join the wrestling team. “We will always welcome more teammates,” Cramer said. “If you even think for a second that you might be interested, you should come and try it out.”

The next stages of the season are the freshman/sophomore and girl’s varsity tournaments on Dec. 2, varsity boys and girls’ first competition on Dec. 9, and dual meet season beginning in January.