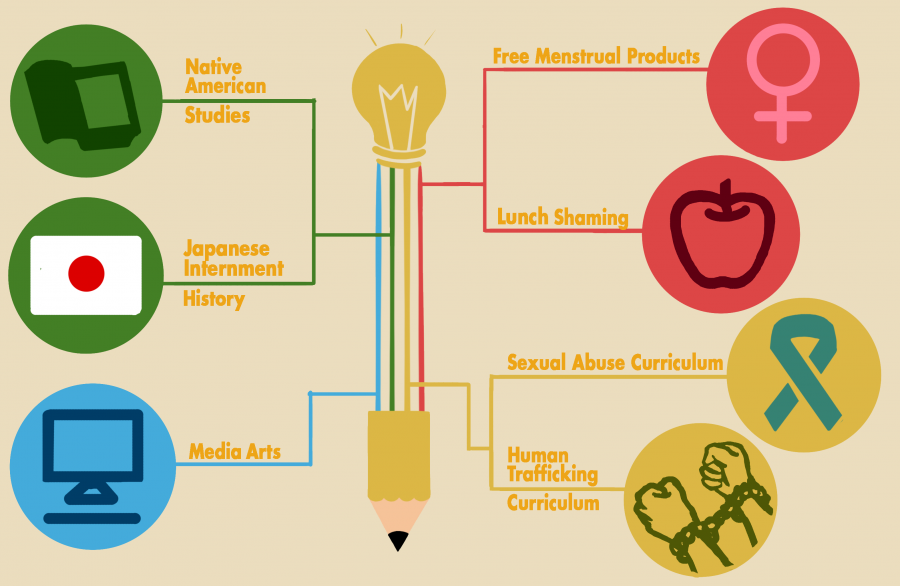 Among these changes is Assembly Bill (AB) 728, requiring the California Instructional Quality Commission, an organization which works to recommend curriculum framework to the state Board of Education, to develop a model curriculum for high school students in Native American Studies. This bill further requires districts without an already-existing Native American Studies curriculum to take this model into consideration and use it as a basis for the curriculum they must plan to implement. In addition, AB 491 establishes a grant program to promote education on the exclusion, forced removal and internment of citizens and permanent residents of Japanese ancestry during World War II as part of the California Civil Liberties Public Education Act. Palo Atlo Unified School District (PAUSD) currently has processes in place to ensure that the material taught to students is compliant with legal requirements involving teachers and staff across the district.

Although such topics are just now becoming mandatory by law, social studies teachers at Gunn have been incorporating them within their own class curricula for many years, as they feel that these topics are crucial in providing students with a more comprehensive and accurate picture of history. Native American studies, for example, has been offered at Gunn for several years as part of the ethnic studies course, although not enough students have been interested to start a class. “Teaching an inclusive history is important,” social studies Instructional Supervisor Lynne Navarro said. “It would be impossible to teach U.S. history and look at World War II without looking at Japanese exclusion [because] it doesn’t make any sense.”

Navarro believes that although Gunn has already taken the initiative to teach a more diverse curriculum, the state is taking steps in the right direction. “I think if you don’t think about the whole picture, then you get what I had back in high school which, was the history of old rich white men,” Navarro said. “That’s not an inclusive history, so we need to look beyond that.”

Given the frequent talks of diversity, both in California as well as in national media, there has been a recent push for more education on the history and importance of race in the U.S. According to Palo Alto Unified School District (PAUSD) Board President Ken Dauber, much of this comes as a response to the rhetoric of the Trump administration. “I think that the election of President Trump and the racism and discrimination that have followed on that are probably why the legislature thinks it’s important to teach diversity,” Dauber said.

Aside from changes in curriculum requirements, significant changes to the sex education curriculum and the availability of feminine hygiene products have been made as well. Californian schools are now required to expand their sex education curricula to include a wider variety of topics including relationship violence, partner violence and human trafficking by AB 643, which was passed in tandem with AB 10 last year. This new bill will address a push by parents in Palo Alto to prepare and better educate students on how to handle and identify realistic situations involving sex and drugs, following the sexual assault scandals over the past two years. “We heard from a lot of parents that they want a curriculum that teaches students about how to handle real life situations including peer pressure, including sexual harassment, sex and drugs and in the context of sexual relationships,” Dauber said.

California AB 10 will require schools with at least 40 percent or more of their students qualifying as low income to provide free feminine hygiene products in half of their bathrooms. Although Gunn’s low income population is below this percentage, Craig believes that requirements simply begin at lower-income schools because of their relative lack of resources and funding, but that such obligations should extend to Gunn as well. “I do know both of our high schools are looking at implementing this anyway, even though we don’t meet the 40 percent level. This is a way to say our kids deserve this just as much,” Craig said.

Currently, Gunn’s health office offers free feminine hygiene products but does not distribute them to bathrooms around campus, as it is unclear who would be responsible for filling, maintaining and checking the restroom dispensers. According to Craig, however, the Gunn health office has been working with the Wellness Center to introduce a system that provides accessible tampons and pads in girls’ bathrooms. “We have talked to the wellness centers already to look at figuring it out system-wise how to get [this plan] going,” Craig said. Their collective proposal to put feminine hygiene products is currently pending approval from the school board.

Senate Bill 468 and AB 261 recognize the rights of student board members and require them to receive preferential voting rights (the right to formally express an opinion before the board votes) on all education boards, as well as open meeting materials and invitation to staff briefings provided to every other non-student board member. Preferential voting for school board representatives was adopted this school year, and Gunn’s student board representative, senior Advait Arun, along with Palo Alto High School’s Richard Islas, are already provided with the same meeting materials and treatment as other board members. The two representatives are also required to vote first during meetings. “We’re already ahead of the curve. [Student board members are already] full participants in meetings; they have every right to comment, they comment pretty extensively and I think they often contribute to the discussion,” Dauber said.