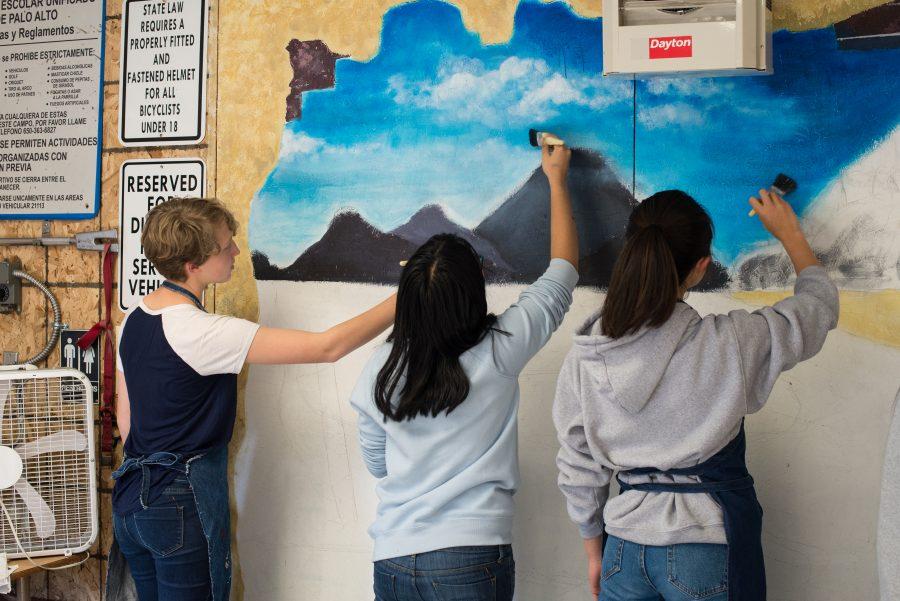 Art students have started painting a mural on the custodial office after the idea was proposed by art teacher Deanna Messinger last semester. The inspiration for the project came to Messinger when she parked her car by the custodial sheds every morning. She saw how unpleasant the environment was for the custodians and set out to make a change by creating a mural on the walls of the once. “As I walked by the custodian’s new space every day going to my room, I [started] talking with Luciano [Hernandez] about how we could make the space a little better for them,” she said.

The mural will also serve to help mask the scent of the plywood that comprises the walls of the shed, a strong odor had been a complaint of the custodians, by adding a layer of paint to cover it.

Custodial supervisor Luciano Hernandez was excited when Messinger proposed the idea. “That’s when the idea came out and I was like, ‘Why don’t you have the students paint something?’” he said. “That’s how it started, and it’s truly amazing.”

Other students, like sophomore Jessica Ko, were hesitant to partake in the project at first. “My initial reaction was that I didn’t want to [paint] anything cheesy like rainbows and sun- shine, but after I thought about it I thought it would be a good chance to try something new,” she said.

After the project was launched, Lui, Hubenthal and Messinger began to brainstorm ideas for the mural with the custodians. One of the primary goals of the students and Messinger is to create a space for custodians where they can feel comfortable and
relaxed. The finalized idea is tropics-themed: it will appear as if the sheds are being broken into and leading to a place of clear skies and oceans. “I talked with [Messinger] and I said I wanted something refreshing like a beach or something green,” Hernandez said. “[The students and I] talked about it, but, I mean, other than that it was almost all the students.”

So far, a basic foundation has been set down. District workers have added a layer of primer, and the art students have begun painting the basic colors for each section of the mural. The finished product will be a mural of acrylic paint reflecting the art technique of “trompe l’oeil,” which tricks the eye into perceiving a piece of art in three dimensions. “It’s where there’s a break, in this case the wall, and we’re going into another world,” Messinger said. “It will appear as though the wall is broken and behind it are the tropics.”

Students are primarily painting after school, with FlexTimes open for those who would like to participate, but have a tighter schedule. Leaders Lui and Hubenthal have also started a spreadsheet tracking hours of painting to give out community service hours for participation. The project is still currently open to any students who would still like to participate, regardless of experience. “I think [there’s] a lot of us learning on the fly, because I didn’t have much experience and a lot of other students with us didn’t have much experience as well,” Lui said. “We’re helping each other create different techniques and styles.”

Messinger is now also planning beautification projects that are more permanent than the scroll paintings that senior Advanced Placement Studio Art students do at the end of the year. “I would [participate in a similar project] if I was given the chance,” Ko said.

There is no concrete deadline, although participants and Messinger would like to get it done as quickly as possible. Messinger hopes that the mural will remind students of all the hard work custodians do for the school. “The point for me, and that I hope gets across to the students, is to appreciate our custodians a little bit more,” she said. “A part of it is giving back to them.”