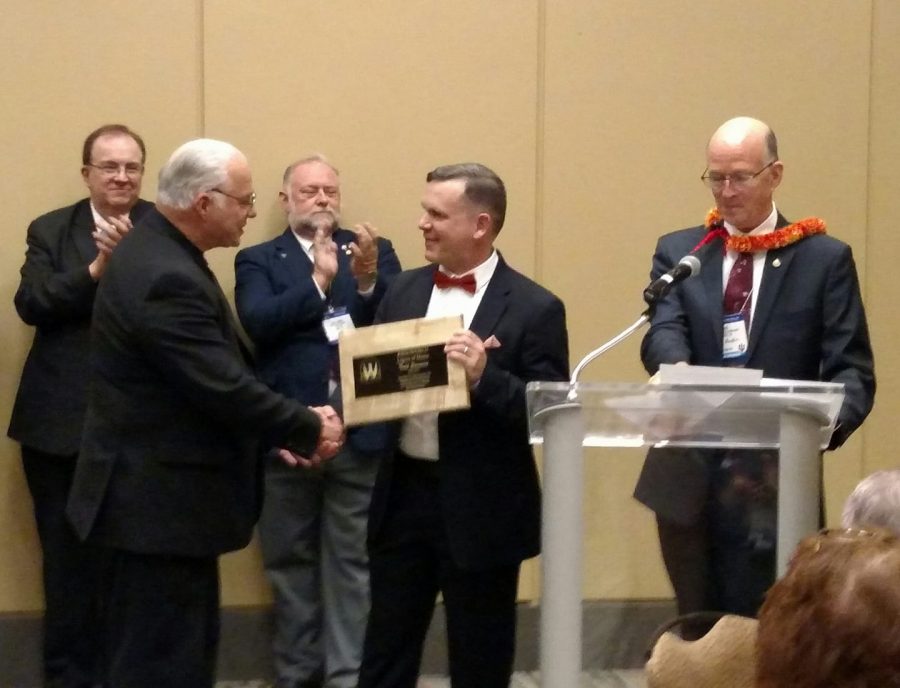 Each year, the Legion of Honor inducts up to ten Laureates from the United States, Canada and Australia. Summers was pleased to be one of seven Laureates inducted this year. “I was very surprised and happy,” Summers said. “It was really an honor to get the reward and represent Gunn High School.”

After having spent a decade teaching music in Ohio, Summers began teaching at Gunn 18 years ago. He has also been an  instructional supervisor for 12 years. Winning the award has not drastically changed the course of his life, but it brought him a sense of validation. “I don’t think anything really has changed,” Summers said. “This award makes me feel good about what I’ve been doing for the past 28 years. It’s nice to be recognized and appreciated for what I’ve been doing.”

To qualify for the award, individuals must have been school band directors for over 20 years. They are nominated by a current Legion of Honor member for excellence in teaching and service to the profession and undergo a rigorous application process.

Senior Emily Springer, who has played in Summers’ band program since freshman year, remembers Summers’ modesty as he traveled back and forth from the award ceremony. “When he left, he didn’t tell us he was going to [receive] the award…[and now] he doesn’t bring it up,” Springer said.

Senior Matthew Lui, who has also spent the past three and a half years in Summers’ class, did not find this award unexpected. “I was not surprised, because I felt it was only a matter of time before he won something big. When I heard he won the award, I was like ‘Why wouldn’t he?’”

Lui believes Summers is skilled at keeping students driven. “I think I have a lot of motivation in general to just be better, because of the way he runs the band,” Lui said. “He makes everyone feel that their part is very important. There’s a lot of motivation to practice your part.”

Summers strongly influenced Springer’s career choice. “I am going to major in music,” Springer said. “I definitely wouldn’t have done that if I hadn’t had Mr. Summers.”

Springers sees many strengths in Summers’ teaching. She admires his level of organization and efficiency during class time, and noted the diligent manner Summers adopts when he writes in his notebook as he listens to guest conductors. She is especially impressed by his marked passion for music. “Mr. Summers is one of the most excitable people that I’ve met as a teacher,” Springer said. “He gets so into the music, and at the height of the music, you’ll see him bouncing up and down his podium. At the end of concerts, he has this special smile no matter what we do. He loves the performance, and you can just see it.” She also enjoys how Summers makes jokes during class.

Lui appreciates the way Summers has students persist through careful practice. “[Mr. Summers] definitely pays a lot of attention to particulars,” Lui said. “We might spend ten minutes on just a few measures just so we can get it perfectly, and if it’s not done right, we’ll just keep rolling it.”

Summers hopes students gain a lifelong love of music from his teaching. “If they continue playing their instrument or being a part of music, that’s fantastic,” Summers said. “But [I hope students] just have a love of music and are consumers of music as they go out to the world after Gunn.”