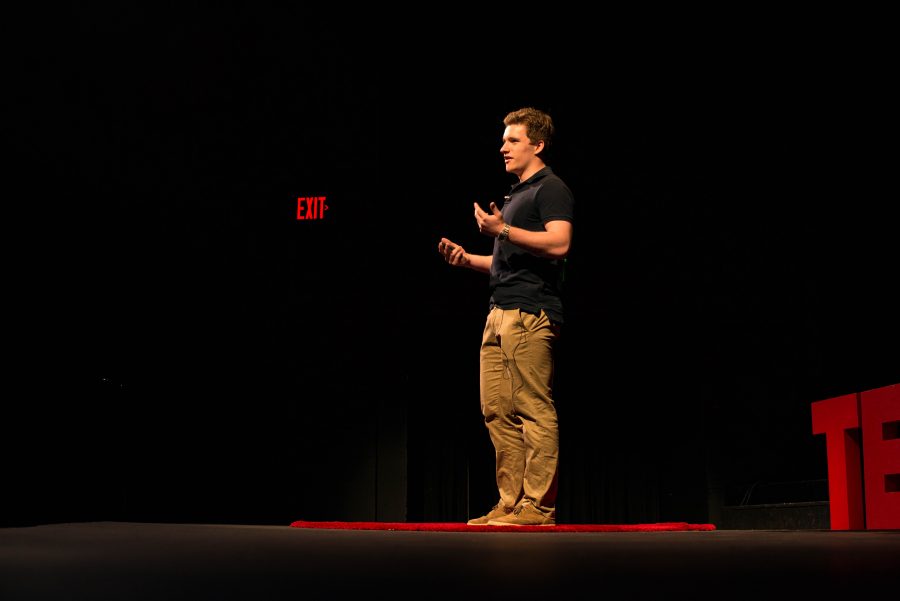 On Jan. 20, the eighth annual student-run Gunn TEDx conference was held at Palo Alto High School’s Haymarket eater. is year’s theme was Crossroads, and the conference featured diverse speakers on topics such as stepping out of your comfort zone, the complicated journey to success, the importance of writing and escaping a culture of comparison. “I thought that the speakers were pretty high quality,” TEDx co-president junior Hannah Kim said. “I like the messages that a lot of them carried.”

The Crossroads theme was chosen to emphasize uniting different ideas and aspects of one’s personality, as well as splitting away from the conventional way of thought. “Crossroads is where paths intersect, and also where they diverge,” Kim said. “We wanted our theme to be something that is really like an overarching umbrella a lot of different people can relate to.”

Math teacher Michael Bautista evoked the Crossroads theme through his speech focusing on the importance of interdisciplinary learning. He brought together math and music, showing how the two are related and how applying music to math can make material more relatable to students. “We can strengthen our knowledge on a topic by targeting different modes of learning,” Bautista said in his speech.

Senior Ethan Houston spoke about the crossroads within himself as someone who had moved several times throughout his life. “I’m always at this kind of intersection where I don’t really know what identity I belong to,” he said in an interview.

Houston’s speech emphasized the importance of recognizing different cultures of immigrants in the U.S. “What I wanted my main takeaway to be from the talk was that we should travel to be able to empathize [with] and understand these immigrants,” he said.

For senior Jenny Gao, the Crossroads theme had a different connotation. “When I think of a crossroads, I think about strangers just passing by each other and being on their own paths,” Gao said. Her speech emphasized the harmful environment for mental health fostered by Gunn’s culture of comparison and the importance of escaping from that pressure. “I think it’s really hard to recognize when something is abnormal in that kind of environment,” Gao said. “So talking about mental illness, I think a lot of people just pass each other by, [and] even if they might think that someone has something wrong with them, they won’t say anything about

The theme also resonated in several of the performances at TEDx, including a jazz violin combo by Stanford University students Kartik Chandra and Doug Klink. “Piano and violin is not an uncommon combination, but… you don’t think of violins [as] jazz,” Kim said. “That’s an intersection of music.”

A lot of careful work and planning went into this year’s conference. e TEDx club started to work on the event in second semester of last year with their search for adult speakers. “The way that we collect adult speakers is we actively hunt them down,” Kim said. “[We think] ‘Here’s a cool adult who we think might make a good speaker at the event.’” These adults, such as this year’s Konstantin Guericke from LinkedIn and Douglas Eck, a researcher working on art and technology integration, are then invited to speak at the event. After searching for adult speakers, the club put out an open call for student speakers, who began rehearsing early this school year.