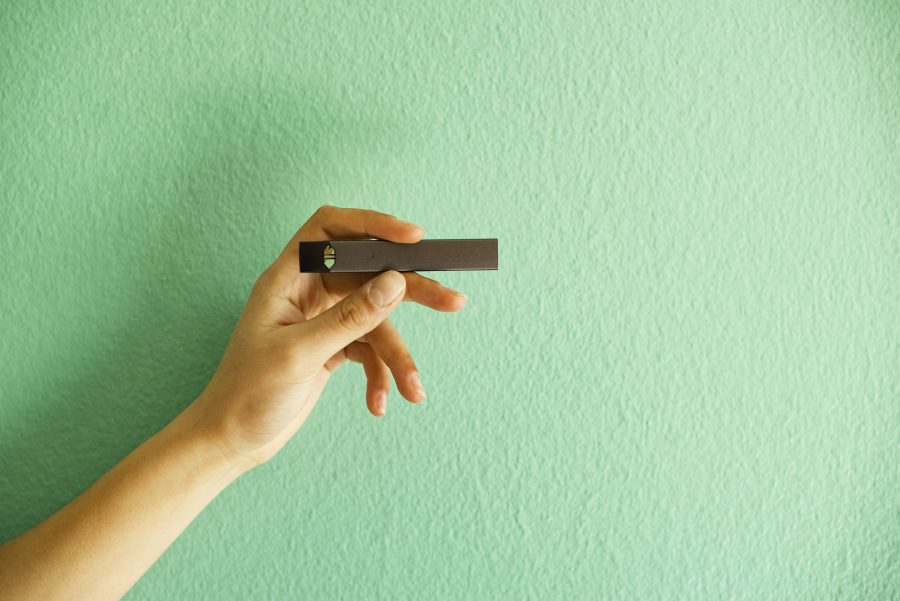 While conventional tobacco cigarettes are increasingly being stigmatized in society, e-cigarettes, commonly referred to as vapes or juuls, are seeing a rise in popularity. An e-cigarette is an alternative method of consuming nicotine—the device uses electricity to turn liquid nicotine into a vapor that the user inhales. Colorful e-cigarette advertisements often claim juuls to be a healthier alternative and boast their wide variety of flavors to especially appeal to younger generations. The usage of e-cigarettes among adolescents is a growing issue and should be scrutinized and regulated by society as much as conventional tobacco.

On Feb. 23, the Palo Alto Unified School District (PAUSD) posted an update on Schoology expressing concern regarding the rising usage of e-cigarettes and requested the community to be aware of the issue. In PAUSD, 14 percent of juniors have used e-cigarettes or other vaping devices, according to the California Healthy Kids Survey of 2015-2016.

The use of e-cigarettes has been steadily increasing in recent years, especially among adolescents. According to the Centers for Disease Control and Prevention (CDC), e-cigarette usage among middle and high school students tripled from 4.5 to 13.4 percent from 2013 to 2014. Youth use e-cigarettes more than any other nicotine or tobacco-related product, with an estimated three million teen users, according to the studies of Krysten W. Bold of the Department of Psychiatry at Yale University School of Medicine.

Teens across the country are drawn to the appealing flavors, trendy imagery, low-odor and sleek design of e-cigarettes. The flavors include chocolate, strawberry, bubblegum and cherry, among others. In addition, certain models of e-cigarettes are easily concealable; they appear as slim flash drives. According to a Time magazine article, people under age 18 can buy e-cigarettes online, even in states where it is illegal.

While conventional tobacco cigarettes tend to cater to adults, NBC News published a 2014 survey by CDC researchers stating that 68.9 percent of middle and high school students see e-cigarette advertisements: more than half of students see advertisements in stores, 40 percent online and 36 percent on TV or in movies. With so much exposure to alluring e-cigarette portrayals, teens may see the device as less stigmatized than traditional cigarettes, when both types of cigarettes should be negatively viewed. According to the Huffington Post, e-cigarettes are also used by celebrities popular amongst teenagers such as Leonardo DiCaprio, Bruno Mars, Jenny McCarthy and many more. There are also Instagram pages that have gained millions of followers by just posting videos of vaping tricks. These pages further enforce the idea that vaping is trendy and “cool.”

Although the media plays a very influential role in our decisions, people should strive to make their own informed opinions on e-cigarettes. Even though e-cigarettes have fewer harmful chemicals than tobacco cigarettes, their health hazards cannot be ignored. Nicotine is an addictive and toxic substance, no matter how it is consumed. With certain e-cigarette models, one e-cigarette pod is equivalent to users inhaling an amount of nicotine equivalent to an entire pack of tobacco cigarettes. E-cigarettes are a way to introduce teenagers into cigarette usage and nicotine addiction. The latter can be especially harmful to adolescent brain development and can possibly lead to the use of tobacco cigarettes. According to the National Institute on Drug Abuse, a person addicted to nicotine may experience withdrawal symptoms such as irritability, sleep disturbances, anxiety, cognitive and attention deficits and depression. Rather than facilitating the way from traditional smoking to non-smoking, e-cigarette companies are encouraging the opposite path. While there have been successful social movements and taxes placed on traditional cigarettes, e-cigarettes are a loophole in the anti-nicotine system and are renormalizing nicotine use.

An anti-e-cigarette campaign can help resolve the difficulties of parental monitoring and enacting immediate legislation. Moreover, reducing society’s demand for the product can decrease the advertising budget of e-cigarette companies. The anti-tobacco movement demonstrates the effectiveness of organized social movements against harmful products: tobacco cigarettes used to be fashionable but now have a bad connotation of being health hazardous and cancer-causing. The method used for America’s cultural shift away from traditional smoking can be similarly applied to vaping. By repeatedly citing the health factors and leveraging the strength of the anti-tobacco movement, the current normalization of vaping can be reversed for society’s benefit. Additionally, figures in popular culture need to stop normalizing the use of nicotine in any form, and parents should also educate their children at a young age about e-cigarettes and their harmful effects.

A social movement is a speedy and persuasive way to direct people away from e-cigarettes, but pricing is ultimately the most powerful tool to control a buyer. Though stricter government regulation may take time, the government should also consider the consequences of not regulating this product. Potential regulation includes excise tax, state tax and strict health standards.

Some argue that e-cigarettes are used to quit smoking. According to the Harvard Public Health Magazine, however, e-cigarettes do not carry an advantage over nicotine patches, nicotine gum and lozenges or smoking-cessation drugs. The same source confirmed that most smokers who use e-cigarettes for the reason of quitting appear to fail.

Improving upon a bad product like tobacco cigarettes does not automatically qualify as “good.” In addition to failing to help smokers quit, e-cigarettes entice youth into smoking. When the general public overlooks this fact, its health and productivity decreases. Readers now should scrutinize the use of e-cigarettes even before a full-fledged anti-e-cigarette campaign arises.