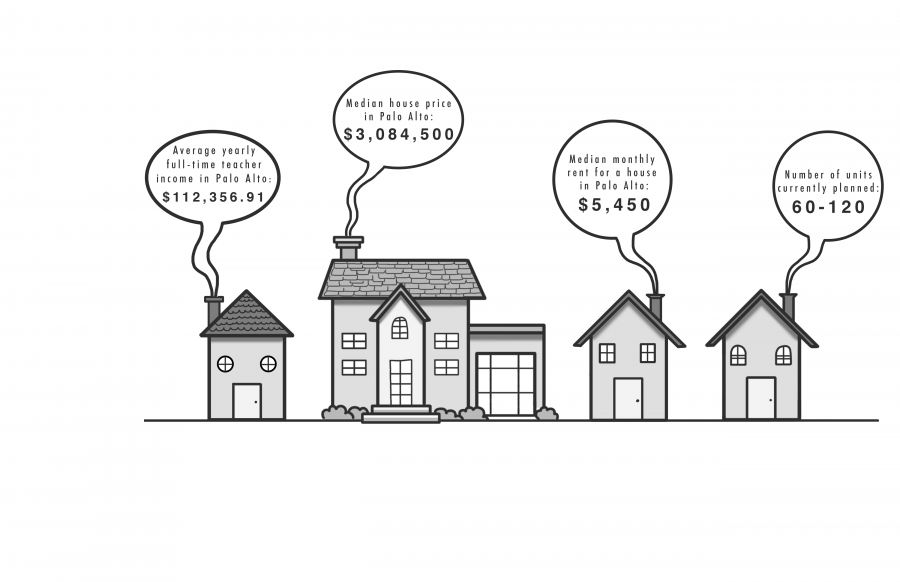 This project was proposed by Simitian in August 2016 when Jane Lathrop Stanford Middle School hosted a meeting with 100 newly hired teachers. The group discussed the proposal and how to deal with Palo Alto’s exceedingly high price range for housing. According to RentJungle. com, as of January 2018, rent in Palo Alto costs around $3,244 a month for an apartment, whereas the median rent for the nation is only $1,234 a month.

The intention of Simitian’s proposal was to address the problem that teachers make up the “missing middle” of income receivers in Santa Clara County. Teachers earn too much money to qualify for subsidized housing from the state government, yet earn too little to afford the housing on the market. “Our economic prosperity is not widely shared in our communities, and because of an extremely limited housing supply, it is increasingly difficult for residents to live where they work,” Simitian said at the Board of Supervisors meeting on Jan. 23.

In order to combat this dilemma, Simitian’s proposal for teacher housing in Palo Alto would create housing for people making 80 to 120 percent of Santa Clara County’s median income of $102,191. Although the plan is open to all residents of the county, it is specifically catered to teachers. Simitian has confirmed that this construction project would be partially funded by the reserves allocated by the Measure A housing funds; approved by district voters in 2015, Measure A increased the parcel tax in Santa Clara, thereby providing for an estimated $14.7 million of the county budget.

This proposal is specifically significant to Palo Alto because, as cited in the proposal, Palo Alto has the highest jobs to housing imbalance in the county; teachers in the Palo Alto Unified School District (PAUSD) are struggling to afford the rising housing prices of the area.

In an interview with the San Jose Mercury News, the president of the Palo Alto Educators Association (PAEA) Teri Baldwin expressed the significance of this housing proposal for teachers. “Palo Alto is known for its excellent schools and education, but the fear is we’re going to lose great teachers and struggle to recruit new ones because teachers can’t afford to live in this area,” she said. “We have teachers who commute from Gilroy, Morgan Hill, Aptos and Dublin, just to name a few places. This long commute takes a toll on our teachers’ quality of life and decreases the value of their salaries.”

Many teachers at Gunn would be directly affected by the proposal if it were adopted into county law. Social studies teacher Tara Firenzi lives in Santa Cruz and spends at least two to two and a half hours a day commuting to and from school. “I think it would have a very positive impact on teachers at Gunn,” Firenzi said. “It’s very difficult for teachers to give all that they want to give when they are held back by circumstances that actually prevent them from being on campus.”

Firenzi thinks that Simitian’s proposal is addressing a problem that goes beyond just teacher housing. “I think that there’s a larger issue even, which is that we need to pay teachers in all communities a living wage,” she said. “Hopefully that will allow people to live and work in their communities as teachers in a way that best supports that community.”

Firenzi sees teacher wages and their housing problems as “systemic issues,” but she believes that Simitian’s proposal is a step in the right direction. “Teacher housing is an important way of addressing some immediate consequences of these disparities, and people should support allowing teachers to live in the communities.”

Similarly, English teacher Marjorie Paronable has been working at Gunn for two years and lives in East San Jose. She has to travel for a total of two hours every day to get to work, a commute which has taken a toll on her daily life. “ That’s my reality, and it’s kind of sad that I just… I deal with it for now, and I just accept it because I care about my job and I care about being here,” Paronable said. “I think of what I deserve and I feel that teachers deserve way more than having to commute back and forth for that long.”

Paronable believes that Simitian’s proposal is vital for keeping high quality education in Palo Alto. “It’s important because if you really care about education and having really good teachers, then you want to keep them,” she said.

Following the Board of Supervisors meeting on Jan. 23, the supervisors agreed to consult the school administrators of the districts and are currently searching for more ways to partner with schools to and enough funding to provide for the construction project.