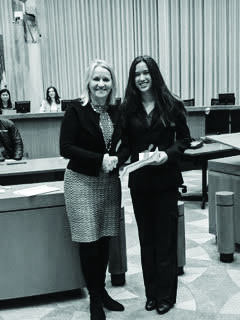 On Jan. 24, juniors Anna Allport and Sophia Chiang won first place at the Rotary Speech contest. The contest was held by the Palo Alto Rotary Club and Palo Alto University Rotary Club and had the theme “Rotary: Making a Difference. What About Me?”

Contestants had four to five minutes to speak and had to include a reference to the 4-Way Test, a moral code that Rotarians follow for personal and business relationships: make sure what you say is true, fair, builds goodwill and is beneficial to all concerned. No props, displays or prompters were allowed; however, they could have a 3 by 5 inch notecard. There are four levels to the competition as well: local, area, regional and district.

According to Palo Alto Rotary Club representative Annette Glanckopf, the winners will continue by competing at an area level with first place winners from other clubs within the area. The first and second place winners will then proceed to compete at a regional level in March, then the final district level.

Glanckopf says that all Rotary Clubs are encouraged to hold annual speech contests for high school students. “Well, this is sort of an international contest, so it’s not [just] our club that has done it,” she said. “We’re really proud of being actually able to do it. It’s a wonderful experience, not only for the Rotarians but all of the teens that have participated have said good things.”

Prizes for the Rotary Speech contest were $100 for first place and $50 for second place. Winners can earn up to $1550 in prizes by winning in each tier of the competition. Glanckopf hopes students use the money for educational purposes.

Palo Alto University Rotary Club winner Sophia Chiang won with a speech titled, “Have You Earned Your Tomorrow?” which talks about how contributions, no matter how big or small, can affect others’ lives. While all five of the contestants spoke about the same theme, her speech was somewhat different. “I wanted to tackle the whole theme, while others took a specific example or part of the theme,” she said.

In contrast to the other contestants who focused on community service, contestant Jenna Kaplan had an unique interpretation of the theme, speaking about truth. “I didn’t actually talk about my own experience, rather I wrote about the impact of the truth, whether the truth matters, and how speaking the truth either in large situations or in small situations does make a difference and what that difference is,” Kaplan said.

The contest made a lasting impression on Kaplan. “Being in this [contest] opened my eyes to what exactly [speech contests] look like, and I think [public speaking] is definitely something I will pursue,” Kaplan said.

The speech contest impacted Chiang’s personal growth as well. “[Writing the speech] made me aware of what I was trying to do, and how I would make a difference,” Chiang said.