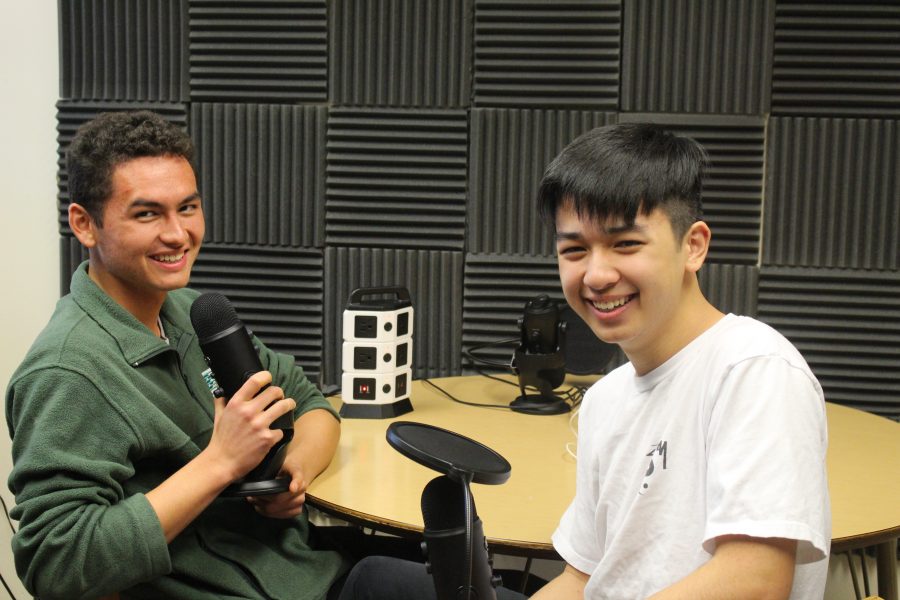 Saying goodbye to Gunn will be a strange experience for every Titan, but Seniors Thomas Burton and Kevin Huang have found the right way to end it with their new project Senioritis. Senioritis is a podcast with episodes released every Tuesday and Thursday on SoundCloud, featuring various Gunn seniors as guests.

The podcast captures the unique experiences and perspectives of different seniors through interview-style segments. According to its creators, it can serve in the future as an account of their high school lives. “I just want everyone to leave learning something about the people who are on the show,” Burton said. “Our class has a very interesting blend of people and it would be really cool to look back on this and have this record of who we were at the time.”

They said that underclassmen can take something away from the podcast as well. “They can learn what the senior experience is like and what things you can do and how the mindset changes over that period of high school,” Huang said.

Senioritis debuted with its first episode on Feb. 6, titled “Second Semester Seniors.” The episode provided a general introduction to the feel and meaning of the podcast with its straightforward topic: being a second semester senior.

Senior Madison Mosier guested on the first episode and found her experience enjoyable. “It kind of gave me a chance to reflect on what I had done all throughout high school and what I want to use this last semester to do,” she said.

Mosier recommended the podcast to her fellow seniors, giving compliment to the questions asked on each episode. “If you have something or even if you don’t have something to say, you can be surprised,” she said. “The questions that they ask are really nice. They’re kind of probing. They will really get you to say what you feel and there’s no wrong answers, so if you have an available flex time, you should totally go talk on their podcast.”

To be featured as a guest on the show, seniors can message any of the Senioritis social media pages or the creators. Burton and Huang aim to have everyone who wants to be on the podcast be on the podcast by the end of the semester.

The podcast is named after the popular colloquial term, senioritis, and according to their Facebook page, is defined as “an ebbing of motivation and effort by school seniors as evidenced by tardiness, absences, and lower grades.” Burton and Huang, however, have a greater meaning for the word that they are trying to spread. “The idea of senioritis is that you slack off, but we think it’s more than that and people can use it in a different way,” Burton said. “We’re trying to inspire people to do stuff. As well as underclassmen, we’re trying to inspire them to take up projects and not be afraid of what people will think. If you are passionate about something, you should just go for it.”

Both Burton and Huang have taken this message to heart and shown it in their own project. To them, Senioritis is a way to stay active and creative through their slow, final months of high school and to show everyone else that they can do the same. “[During] this period, it’s really easy to just have nothing done, stay home, do the same thing over and over again. So this is really important to me,” Huang said.