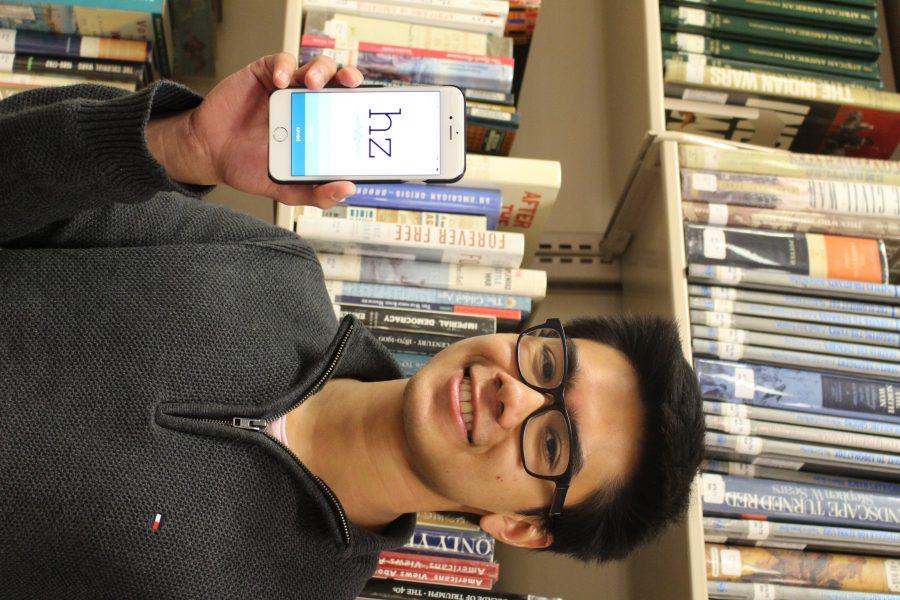 Applications are the lifeblood of phones. Silly selfies, frustratingly hard games, text messages and all other everyday functions people use phones for exist in apps. Beyond just a mere consumer of these apps, senior Anand Chandra is also an app programmer.

His decision came on a whim in his junior year. “I was going to start getting into programming my own things, so I thought it’d be cool to make an app,” he said. “You can have it on your phone and just pull it out and show your friends.”

In the beginning, Chandra was filled with ideas. He regularly practiced sitting down and throwing out ideas, often brainstorming ones he didn’t end up using, as a part of the creative process. “Ninety-nine percent will be garbage, but there’s going to be one or two ideas that are actually worth something,” he said.

The first app he created was at PalyHacks, an international 24-hour hackathon hosted at Palo Alto High School. There, he created an app called Spice Me, which gives substitutions for certain cooking ingredients if the user is lacking one in a recipe. For example, if a recipe called for a sweetener, the app might recommend options like cane sugar, brown sugar or honey. “[Spice Me] didn’t work that well, honestly,” he said. “However, it was a great experience, and it was cool even seeing it.”

After Spice Me, Chandra built Food Flare at TinoHacks, a two-day hackathon hosted at Cupertino High School. Similar toYelp, it locates restaurants within a selected range and offers information about it like address, hours and phone number. What differentiates Food Flare, however, is that it helps narrow down the number of choices. “Even with Yelp, when you open it, there’s 20 restaurants, and, sure, there’s a lot of information about it, but the point is that you can still be paralyzed by the number of choices,” he said.

To program his first official app, Chandra first needed more experience. He started by taking an online iOS development course by Stanford University called CS193p. The course included lectures and homework, but everything was free and accessible from home. “I did it during school,” he said. “I made time for it everyday, and it was something I was interested in, so it was easy to keep up with.”

Around this time, he started working on Chorely. He wanted to make money on the side while still getting through his schoolwork, and he was inspired to make an app. The app connects users with people who are willing to complete chores. The app also includes features such as a rating system for regular users to build credibility through the reviews of others.

Chandra’s latest app is on a different tangent, inspired by his experience playing the violin. HZ Intonation is a tuning app which allows musicians to record themselves and later check with the app’s tuning system to review portions that were out of tune. “You don’t have to be in full intonation-mode, and you can practice as if you’re actually performing,” he said. “It can also be helpful for beginners so that they can focus on a technique or something that they’re also working on without sacrificing information about their intonation.”

The path to programming apps was not an easy one. Chandra had estimated the time needed for Chorely to be a couple of weeks over the summer, but it ended up taking much longer. There were also difficulties due to his initial inexperience in working with programming programs like XCode, an editor for iOS apps. “It’s all really linear in your head, but when you build, it’s anything but linear,” he said. “You think it’s going a certain way, but it might go ten different ways and you have to figure out which one to go with.”

To counter diffculties and receive feedback, Chandra turned to online programming forums like Stack Overflow or to other people he knew. Stack Overflow helped with programming problems, while Chandra turned to his friends or family for app-design feedback. “It’s good to get [feedback] from people when you’re building apps because it can be easy for you to use since you know what you built,” he said. “You can make a button that’s relatively small and people might miss it even though you know it’s obviously there.”

So far, Chorely has about a thousand downloads while HZ Intonation, only having been on the market for a few weeks, has a little over a hundred.

In the future, Chandra plans to continue program- ming more apps. He’s tried web development, but nothing seems to speak to him as much as app programming does. “It’s probably a ‘me’ thing,” he said. “I just like something about it, and I’m still thinking of new ideas so I’ve got something I’m going to start working on.”