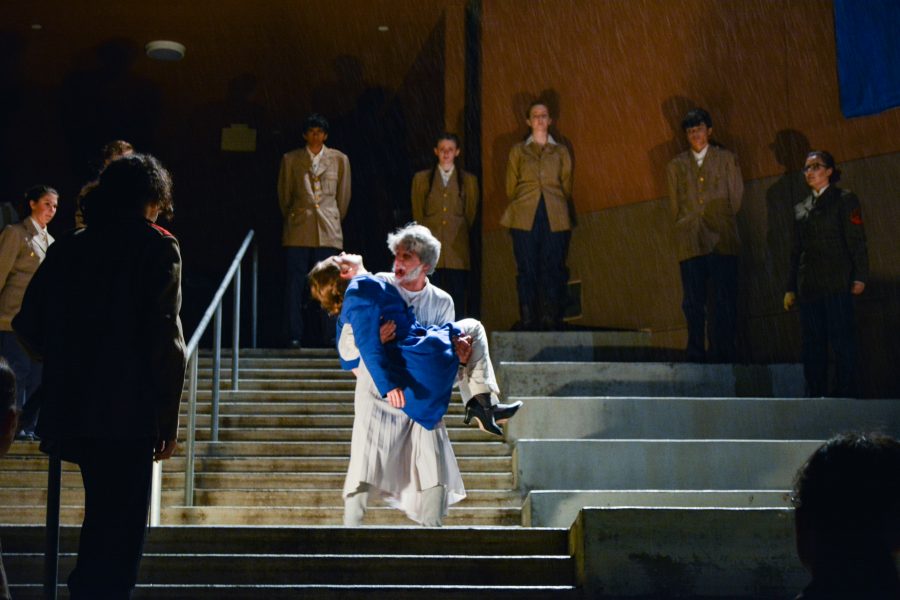 “This cold night will turn us all to fools and mad-men.” A line spoken in the third act of the play perfectly echoed the feelings of the shivering theatergoers gathered around the steps of the N Building to watch theatre’s spring production of Shakespeare’s “King Lear.”

Up to this day, “King Lear” remains one of the English playwright’s most famous and performed plays, captivating audiences all over the world with its thrilling plot and lively performances. is particular production of the play, however, had a twist: it was all themed around Yugoslavia. The costumes and props were all relatively modern, and the main feature of the “stage” was a large Yugoslavian flag cascading down from the N Building. Although the text of the play itself wasn’t altered, this modern theme brought a sort of rejuvenating vivacity, and audience members were able to relate more closely to the characters.

The audience was seated in rows of chairs set in front of the stairs, illuminated by the so glow of the fairy lights hanging across the area. e overall atmosphere was that of a cozy campfire, with warm beverages and food available for purchase. is setting greatly added to the performance, and although the weather’s frosty bite seemed almost unbearable at times, there is something comforting about being huddled and shivering with others. A sort of camaraderie grew throughout the performance, and a sense of satisfaction as well as admiration set in at the end of the play.

The chilly weather did not seem to faze the actors, however. The women in this production were especially talented at showing no sign of discomfort as they paraded around in flimsy skirts and dresses. Not once during the show were they caught unaware, and they managed to remain in character even through the worst gusts of wind.

What was truly impressive, though, were all of the grand entrances that the cast was able to pull off. Walking down or up stairs isn’t easy on a regular day, but to do it in heels or formal wear without looking down at your feet is a feat that only the determined few can achieve. The actors moved, and often jumped, up and down the steps very nimbly and rapidly at a constant pace in uni- son. Quick, sudden gasps or movements from the actors never failed to elicit a jump in the audience, and the shock factor kept the cold crowd from losing focus.

The true masterminds behind this production, however, were the techies stationed in the back, always ready with just the right sound and light effects. Thanks to the cover of the dark night, they were able to manipulate the actors’ shadows like puppeteers, casting large and scary projections onto the entire wall of the building. On more than one occasion, the crew was tasked with creating the illusion of a storm, o en using very basic and simple instruments. They did not fail to deliver. With the slightest rumble of a drum and the use of a thunder sheet, they were able to enchant the public and make them lose the distinction between illusion and reality.

The audience’s imagination is something that this production played a lot with. When given the chance to let fantasy take over, they let themselves go and bought into the story that the actors were telling, and that was the true beauty of this performance. The difference between a good story and a great story lies in how it is communicated. A good story is told with words, but a great story is told with emotions.