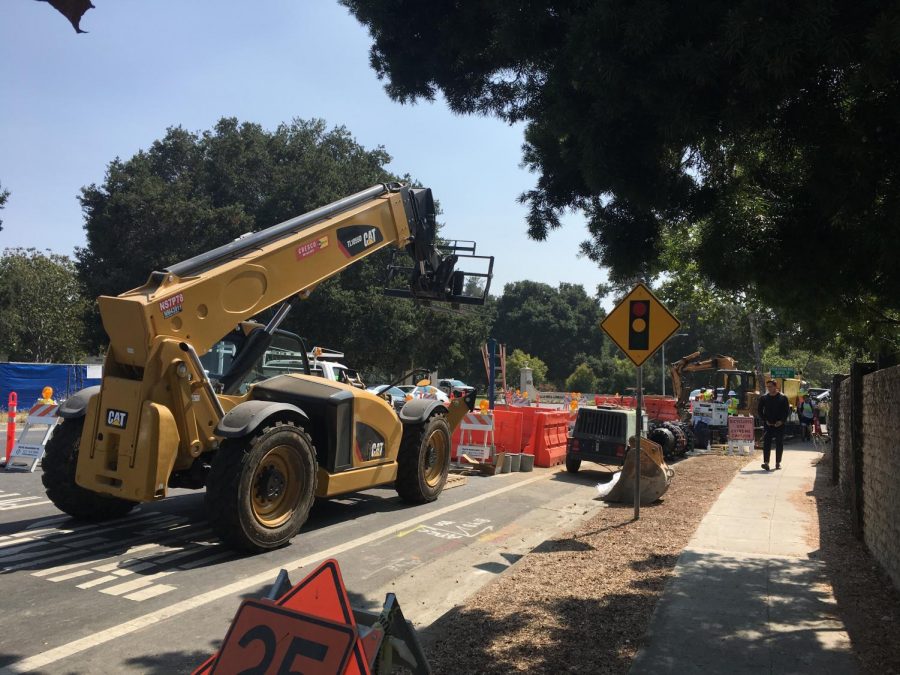 Many students and staff members who commute to Gunn via Charleston or Arastradero Road have experienced the inconveniences of construction in the beginning of the school year. The Charleston/Arastradero Corridor Project broke ground in June 2018, and Phases 1 and 2 of the project are projected to last until May 2019, according to the City of Palo Alto website.

Phases 1 and 2 are focused on the portion of Arastradero between Foothill Expressway and Clemo Avenue, and on Charleston Road between Middlefield Road and Alma Street, respectively. The construction hours are 9 a.m. to 6 p.m. Monday through Friday, though construction was cancelled altogether on Aug. 13 and 14 for the start of the Palo Alto Unified School District (PAUSD) school year.

During the first few weeks of the school year, one of the main undertakings of Phase 1, the installment of a bioretention area (a raised section in the street that provides a safe place for pedestrians to stand) caused one lane, as well as a bike lane, to be shut down on Arastradero. “Our contractor is in front of Bowman International School and they’re putting in a bioretention area, which includes excavating and placing pipes for storm drains, as well as planting, which will hap- pen later as the project progresses,” Charleston/ Arastradero Corridor Project Manager Holly Boyd said.

The Corridor Project aims to enhance the bike and pedestrian safety of the Charleston/ Arastradero Corridor, a key commuting route for at least three PAUSD schools. “Along the whole corridor, from San Antonio Road to Gunn, there will be a dedicated bike lane,” Boyd said. “In some situations, there will be a two or three-foot section on the road that is zebra-striped so there is a visual divider between the bike lane and the traffic through-lane. There will also be some green pavement markings [in the bike lane], and in certain areas we’ll have park- ing that protects the bike lane and separates the bikers from the through traffic.”

The corridor’s traffic flow is also going to be addressed through improved traffic signaling infrastructure that is adaptive and optimized. “The City [of Palo Alto], as a part of this project, has purchased a product called SynchroGreen, which coordinates the signals along a corridor,” Boyd said. Once the project is done, the signals will be able to be timed and manipulated, ad- dress capacity issues and increase flow along the corridor. The SynchoGreen product has already been implemented along Sand Hill Road and San Antonio Road, according to Boyd.

Around 80 trees, various shrubs and grasses will also be planted to beautify the corridor.

For many Gunn students and staff members who drive down Arastradero during their daily commute to school, the construction and its resulting traffic is especially burdensome. “I definitely have to leave earlier [because of the construction], around fifteen to twenty min- utes earlier,” Special Education teacher Lynn Tabuchi said. “Right now, Gunn traffic has to fight Terman traffic and construction just to get through.”

Senior Jack Flinchbaugh has even altered his daily school commute due to the Corridor Project. “I no longer drive down Charleston anymore because of the traffic caused by con- struction,” Flinchbaugh said. “It’s faster to get on a side route.”

Once the project is completed, Boyd hopes that commuting down Charleston and Arastradero will be easier for Gunn students, staff members and parents. “With the added landscaping it will be a more pleasant drive, and with the new traffic signals it should be more efficient,” she said. “For Gunn students who bike, they will see a continu- ous bike lane, and I think they will feel a more protected bike experience on the way to school.”

-Epstein, a senior, is a Sports Editor