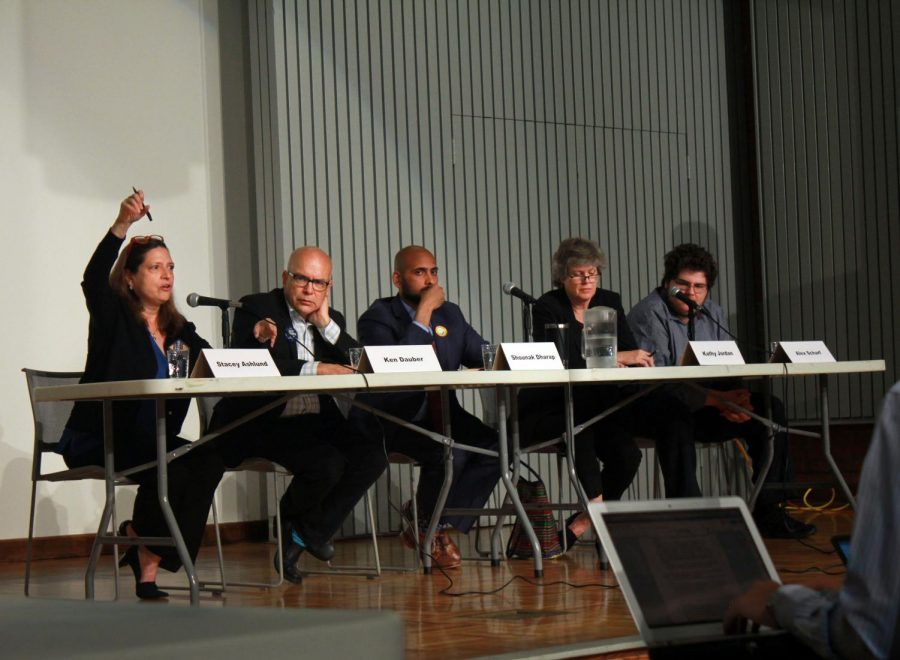 The Palo Alto Art Center housed the first school board forum of the 2018 school board election, hosted by the Palo Alto Weekly and co-sponsored by Gunn and Paly student publications on Sept. 20. The debate showcased five of the six candidates, excluding Christopher Boyd, running for the Palo Alto Unified School District (PAUSD) Board this year, and allowed them to personally address questions regarding academics, student mental health, legal issues, qualifications and other relevant issues. The first series of questions were asked by event emcees Jocelyn Dong and Elena Kadvany. The following round was open to questions from The Oracle and Paly publications. Concluding the forum, the public was given the opportunity to write down their questions and submit them to the emcees, and a few were chosen and addressed by the candidates.

The topic of the correlation between student course load and mental health, widely spoken of around PAUSD, was addressed through several questions and responses throughout the debate. School board candidate Ken Dauber, running for re-election, emphasized the importance of sleep in helping students remain academically and mentally balanced. “The wrong way to think about the relationship between student wellbeing and academic achievement is that we have to tradeoff one against the other. In fact, healthy, well-rested, happy students are good learners. I’m less interested in talking about balance than talking about how we can make our schools work better for our students,” Dauber said. One way Dauber believes that PAUSD can assist students is by removing zero period, which limits 250 students from getting the sleep he believes they need to succeed. Shounak Dharap, lawyer and Gunn alumnus, agrees with Dauber on this issue and believes that the district can and should do more to create a healthy learning environment for students. “One of the things we need to do is continue having frank discussions about mental health, about issues like weighted GPA and laning, things that don’t only implicate mental health but also equity, and continue having these discussions to make sure we are always building an environment that is going to support our students,” Dharap said. He is known to disapprove of weighted GPA and laning, two systems currently in place at PAUSD high schools, bringing to discussion their effects on students’ well-being and the amount of academic rigor instated at Gunn and Paly.

As the floor opened to Gunn and Paly publications for questions, Paly Voice reporter Nisha McNealis asked the candidates if they pledged to support student press freedom. All but one candidate, Kathy Jordan, pledged to support student journalists. Jordan’s disapproval of the Campanile’s report on the October 2016 sexual harassment case prompted the discussion of Ed Code 48907, a law which protects student press freedom. When asked if she would pledge, she began to discuss the limitations and laws regarding what the press is permitted to print. “You’re asking about freedom of the press and the student press, but press freedom is not absolute. The press has to maintain professional standards of journalism; the press cannot print just about anything. So, press freedom does have constraints placed upon it, and that is the purpose of Ed Code 48907,” Jordan said.

To end the debate, each candidate was given 30 seconds to differentiate themselves from their fellow candidates. Parent and active member of PAUSD Stacey Ashlund said that the time she spent in the community engaging in different groups and services gave her a knowledge of the district that differentiates herself from her competition. “One word: experience, personal as well as community experience. I’ve served on two cite councils, yes PiE advisory board, yes PTA council, and yes PTAs at all three of the schools that my children attended,” Ashlund said. Employing a completely different perspective, recent Paly graduate and Foothill College student Alex Scharf emphasized his first-hand knowledge about high school student life. “A lot of the problems that students have aren’t necessarily being talked about to their parents or teachers and they internalize a lot of their struggles,” Scharf said. As a recent high school student, he has experienced the hardships of high school students in the district, bringing a new point of view to the school board.

Palo Alto residents can vote for the two new school board members on Nov. 6 of this year. To learn more about each candidate and their stance on PAUSD issues, the full debate is on Palo Alto Online.