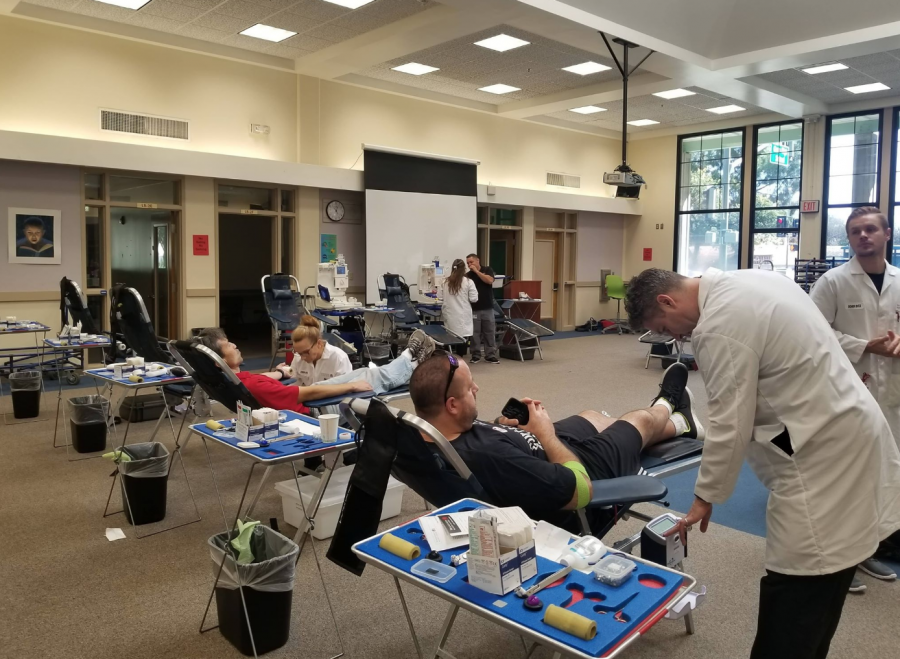 On Friday, Oct. 12, the Youth Community Service-Interact (YCS-I) Club hosted a blood drive in the library in partnership with the Stanford Blood Center. Sixteen- and 17-year-old students could donate blood with a signed parental consent form, while 18-year-olds were allowed to donate on their own. A total of 49 students and staff donated blood.

YCS-I additionally organized student volunteers who distributed snacks and helped out during the blood drive. “We have a system to get volunteers to help out with the food section throughout each period of the day,” YCS-I co-president senior Ria Sood said. “The biggest thing was making sure people got call slips to get excused and we organized how many people were going to sign up.”

Students who donated a pint of blood received a coupon for a free pint of ice cream at Baskin-Robbins as a part of a “pint for a pint” exchange. In addition, students also received coupons for $1 off of any frozen beverage at Baskin-Robbins and $3 off any cake. In past blood drives, the Stanford Blood Center has offered T-shirts, movie tickets and Chipotle coupons in exchange for donating blood. After donating, students were also provided with a variety of snacks, including Oreos, string cheese and juice, as well as a bag filled with Gatorade drinks and pretzels in case they hadn’t eaten.

Although she feels that the drive went well overall, Sood also believes that the organization of student liability forms could have been improved. “There was confusion about liability forms for 16- and 17-year-olds,” she said. “Some people couldn’t donate because of that.”

YCS-I’s partnership with the Stanford Blood Center made the blood drive possible. “It was just making sure we had space, and [that] we had advertised it enough to get the people here, and then Stanford took care of the rest,” YCS-I member sophomore Kate Williams said.

The blood drive has received a positive reaction from students and administration. “It’s great for people to donate blood,” principal Kathie Laurence said. “It’s a need: many times there are shortages. I feel an obligation to do it. I have plenty; I’m willing to share. When I was younger, I would donate as frequently as I could. It is truly a lifesaver when people donate blood.”

Senior Zoe Dabbagh agrees with Laurence. “It’s for a good cause,” Dabbagh said. “It’s not that much blood to give, so if I can help someone by being in pain for ten minutes then it’s worth it.”

YCS-I is planning on hosting another blood drive come the second semester.