Discovering worth: Junior Abby Sullivan wants to help others based on her own struggles 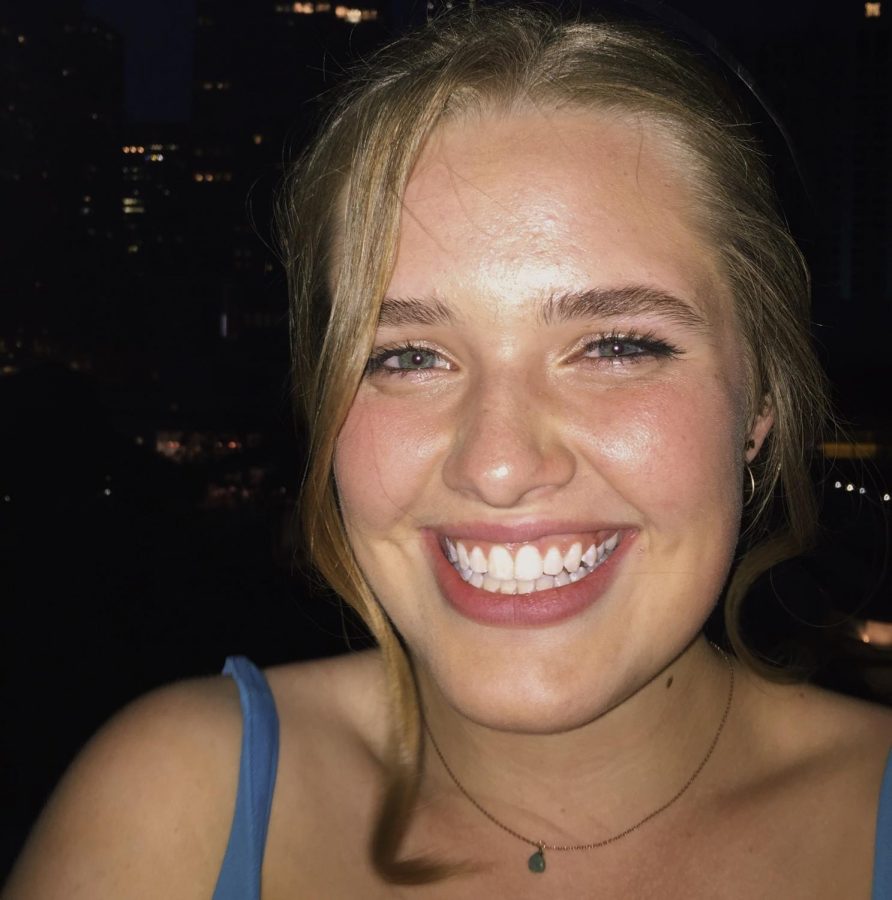 Hi, my name is Abby. I’m a junior here at Gunn High School in Palo Alto. A lot of you probably already know me or know of me. I’m in choir; I played water polo; I work at Philz on Middlefield; I’m in YCS-Interact (Youth Community Service), ROCK (Reach Out Care Know), TapOut, Bring Change to Mind, French Club and Film Club; I babysit; I try to volunteer at PTA (Parent Teacher Association) events in the middle and elementary schools; and I’m on the Teen Wellness Committee at Children’s Health Council. Last year I worked with a few of my friends to organize walkouts and protests promoting gun reform on a state and national level, which led me to play a part in National Die In, an organization that works on promoting new gun legislation, National School Walkout, a student run initiative to get other high schoolers involved in being politically active and PreReg16, a Bay Area program that focuses on getting teens 16 and older pre-registered to vote. Through the new friends I made during my time as a gun reform advocate, I became a member of the Students Against Sexual Harassment (SASHA). You may have heard of these organizations, or you might not know of any of them—this is all really besides the point.

Regardless if know me or not, I can almost guarantee that you don’t know this: I face depression and anxiety on an everyday basis.

I didn’t even know this about myself until the the week before finals at the end of my freshman year. Throughout middle school I had an inkling that I was at least either depressed or anxious, but I never wanted to confess it. I thought that if I said it, people might view me as weird and call me phony (like those people on Tumblr who romanticize mental health issues). I also had nothing to really be depressed or anxious about; I had moved around a lot, but I had a family that loved me, supportive friends and was doing well in school.

Freshman year was hard. There was a lot of academic pressure—most of which I put on myself—and I had a falling out with my best friends. I still had people to sit with at lunch and in class and other friends to talk to, but I still felt alone. Sometimes I, a usually talkative person, would stay quiet all of lunch to see if people would really notice or care if I was gone. Sometimes I would be asked if I was okay, but the majority of the time people would just ignore it and continue laughing and having fun. It got to a point where doing anything hurt. It literally hurt to breathe. I would have breakdowns and anxiety attacks alone in my room, contemplating what I could do to end the suffering.

One afternoon, it got so bad that a friend of mine persuaded me into talking to his mom, a doctor, who later contacted the Wellness Center at school. The next day, I was pulled out of class to talk to a school therapist about what I had been dealing with. She called my mom, which resulted in me having an appointment with a therapist the very next week.

I had never approved of therapy before. I went for a little bit in elementary school, but the therapist was much too “hippie-dippy” for me. I didn’t like talking about my feelings, especially the dark and troublesome ones, and I absolutely despised old people prying into my world only so they could tell my parents everything going on in my life. I hated aromatherapy and mists; I hated the little fidgets in therapists offices; and I hated the stupid pads of paper they took notes on. I hated therapy.

My mom shoved me in the car and drove me across town. It wasn’t that I was afraid of therapy, I just, you know, hated it. I had this pre-conceived notion of how therapy worked and this generalization of what it was. I thought therapy was for people with actual issues, people facing real struggles and pain, people who needed help. I was not one of those people. I didn’t think that I was dealing with valid issues, and I most certainly did not think I needed help—especially not from some old quack who was going to tell me to meditate and breathe deeply in order to align all the untamed parts of my life.

I met with the therapist. She was young, had a pretty, flowy dress on and looked at me with kind eyes. She was frank and didn’t try to step around issues. She was honest and full of integrity. She really cared. You could tell that she was one of those people who had a purpose: she was doing what she could to make the world a better place. Don’t get me wrong, though, the first appointment was still very tough, and I left unsure and sad.

Three months into therapy, my therapist brought up the option of medication. My depression and anxiety had stayed the same, or had maybe even worsened, so I immediately agreed. She warned me of all the downsides, but I really didn’t care. At that point I was falling off of a cliff, reaching for anything to keep me from falling further.

School started again. I started sitting with different people during lunch, my teachers were okay, and I thought that maybe I could make it through. Then the second day of school came. As soon as my English teacher received the note from the administration telling her what to say, I knew from the look on her face what had happened.

I didn’t know Alec; I have friends who were very close with him, but that started a very dark week for me. The next few days were filled with teachers and coaches offering their support and sharing their pain, but none of it seemed to help. One of my amazing teachers led a class solely on anxiety and depression, which was a wonderful lesson, except that I had a anxiety attack throughout the entire hour and a half. I couldn’t breathe and I started crying. All I could do was think about everyone’s eyes on me, although my friends have told me that no one noticed. I wanted to ask to use the restroom, but I couldn’t bring myself to raise my hand to ask. Every time I opened my mouth and tried to speak, no words would come out, only a whisper of the pain I was going through. “I shouldn’t feel this bad. I didn’t even know him,” I kept telling myself. I felt guilty for feeling upset. There were people who knew and loved him, and I had no right to be upset.

The year trudged on.Getting out of bed became harder with each passing day, every breath was shallower and I somehow was doing worse and worse in every class. I just couldn’t do it anymore.

I made it to Thanksgiving break. It was the happiest week I’d had in a while. However, it ended with my mom and I getting in a small argument, a gigantic anxiety attack and a plan.

I texted people goodbye and apologized for everything I had done and was about to do. I sat there for what seemed like forever, crying and trying to decide if I should really go through with it—weighing the probability of my survival.

Then my sister screamed for my parents and ran into my room. One of my friends had called her and told her what was happening. My entire family started crying in sheer confusion of my actions.

There was a loud knock at the door. I knew that it was the police. I rode in the back of a cop car to the Stanford ER. After spending the night, I was transported to a psychiatric hospital in San Mateo. It was the scariest few days of my life; I felt like everything was out of my control.

Returning to school was hard. Really hard. I felt like everyone knew and that they thought I was looking for attention. To make matters worse, my family and doctors made me start an Intensive Outpatient Program (IOP): three and a half hours a day, four days a week, for twelve weeks. If I was stressed before, I could only imagine how hard it would be to have no time to do anything besides therapy.

I was so anxious. The last thing I wanted was to spend my time with a bunch of depressed, angsty teenagers. But after the first day, I wanted to go back. IOP soon became the best part of my day. I had a reliable group of girls who wanted to see me everyday, who were there to help me and who were going through the same struggles. Overtime, I was able to build a life of both new and old values: the healthiest life for me.

I still go to therapy. I still practice Dialectical Behavior Therapy, which I learned in IOP. I still text my IOP friends every day. I still take medication. I still have depression and anxiety. I still struggle. But I’m still here. And that’s what I want for others. I want to help others in the position that I was in—to help them build a life worth living.

To anyone reading this: You matter. You are worthy of any and all good things. What you are going through is valid. You can do this. I believe in you.

If you are worried about yourself OR a friend, to be directed to professional help, contact

The National Suicide Prevention Lifeline: 1-800-273-8255, 24/7 access to trained counselors
School counselor/psychologist
Your doctor
suicidepreventionlifeline.org and click “Get Help” for yourself or for a friend
If the threat is immediate, call 911