Titan cheerleaders qualify for nationals, up their game 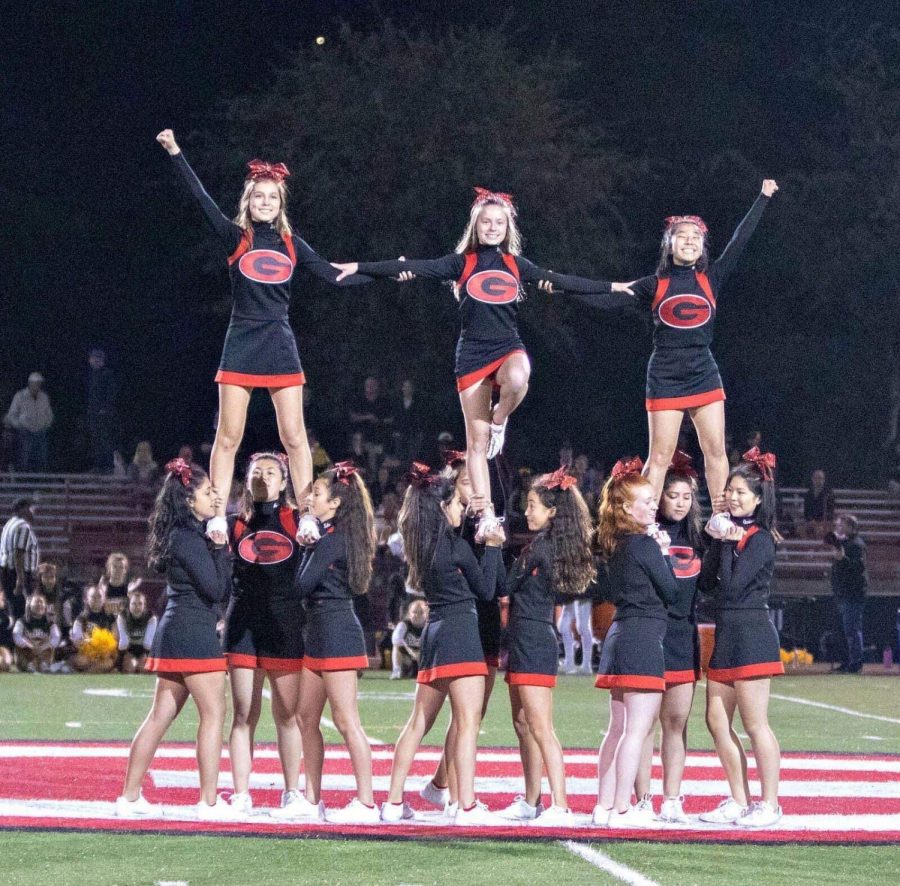 After a successful season, months of preparation and an outstanding performance at their last competition in Santa Cruz, the cheer team recently qualified for nationals, which will take place in Anaheim between Feb. 22 and Feb. 24.

The team put a lot of work into preparing for the competition, with particular focus placed on their stunts and tumbling through special clinics and practices. “[Tumbling is] what you see at games when people go in the air,” junior Zoe? Lo said. “It seems pretty straightforward. You lift the person in the air and then you hope they don’t fall. But there’s actually a lot more behind it: the technique, the way you position your body and utilize your muscles to get the best start possible. [Practicing these skills] really helps us with competitions because we’re nice and clean and sharp… a huge part of cheer is to not only be loud and to show the judges what you can do, but also to be clean about it and safe.”

According to cheer coach Jazmyn Turner, preparation for the competition began last school year. The team held tryouts in April and worked on perfecting their routine over the summer. “Coming into the new year, we really focused on the stunt- ing and then from there we placed all of it together,” she said.

For their competition in Santa Cruz, the team members worked on improving the routine that they had choreographed last year. “Last year was just a lot more rushed, throwing it together last minute before [the] competition,” junior Emily Cohen said. “But this year, we had the same routine, so we had more time to practice. It’s really exciting to hit it full-out once.”

Lo believes that the team dynamic also contributed to their success at the competition. Over the course of the season, they were able to establish an understanding and knowledge of each other that ultimately helped them succeed. “It’s a team sport,” she said. “It’s not how fast you can run, or how far you can jump or how many baskets you can shoot. It’s a team effort. If you want to get someone up in the air or you want to hit that routine, you have to do it all.”

Cohen also believes that better time management was a major factor in their success this year. “This time, we just spread [our preparation] out over more weeks and focused on going back to the basics of everything and conditioning or being stronger instead of just rushing into everything and trying to throw skills we didn’t know we had yet,” she said.

Turner thinks that the team’s mindset going into the competition was crucial to achieving good results. “Being a coach, I can only take them so far,” she said. “If they don’t have it in their heads to want to become a better athlete then in the end they’re not going to succeed.”

The team was extremely excited to find out that they had qualified for nationals. “[I was] ecstatic,” Lo said. “I couldn’t believe it. I was really hoping that we would, so a small part of my mind was like, ‘yeah, we’ve got this,’ but you’re always worried that you don’t. We were just so happy.” Turner believes that their excellence at this competition showed them the potential they have for the future.

In the future, Turner hopes to help improve the cheerleaders’ athleticism and increase the level of difficulty in their routines. “My main goal is to make them stronger and advance them in their skills and their stunting,” she said. “I really would like to see a team that can show the different qualities of cheerleading such as advanced stunting, advanced tumbling and really advanced skills such as arm motions, sharpness, jumps, anything of that nature.” The cheer team hopes to put their best foot forward at nationals.