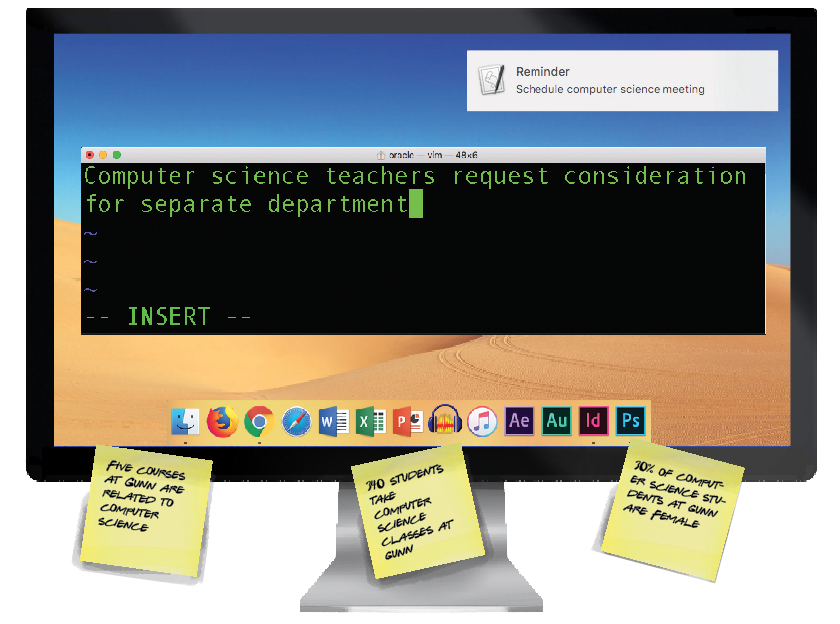 On Dec. 19, 2018, computer science (CS) teachers at Gunn and Palo Alto High School (Paly) sent a letter to the Palo Alto Unified School District (PAUSD) Office stressing the need for both a CS graduation requirement and a CS department in PAUSD. This letter was written in response to a plan proposed by the Computer Science Curriculum Design Advisory Committee (CCDAC), which included two single-semester CS electives instead of the requested department and graduation requirement. According to PAUSD School Board President Jennifer DiBrienza, the PAUSD School Board is looking to address the teachers’ request in the coming months.

CS teacher Joshua Paley, who collaborated on the letter, has advocated for a district-wide CS department in order to increase vital communication that he believes has recently diminished. “We don’t have nearly enough time to communicate with each other so we can make sure that the stuff that ought to be taught is being taught,” Paley said. Some of these scheduling issues were noted by Math Instructional Leader David Deggeller. “[CS teachers] don’t have a structured time to meet,” Deggeller said. “They find themselves having to claw together chunks of time so they can meet and talk about super important things like curriculum, long-term planning, assessments.”

Deggeller and his work have been affected by the rising conflict to find time for both CS and math as well. “The problem is that most CS teachers are math teachers, so I end up doing a lot of CS stuff because it’s my people,” Deggeller said.

According to Principal Kathleen Laurence, the decision to approve and organize a CS department is the district’s responsibility. “It’s a district-level decision about whether we create a new department or not,” she said. “There’s only 13 sections of CS, so I’m not sure it’s really big enough to be a viable department at this point in time.

It doesn’t mean that in the future it wouldn’t.” The already established departments at Gunn have significantly more sections; for instance, math, social studies and English have 77, 102, and 149 sections, respectively.

For Paley, a CS department could not only increase equity but also help organize funding for professional development conferences, where teachers go to improve and update their styles of teaching, for CS teachers. Computer science was previously a constituent of the Math Department, but is now categorized as a Career Tech Education (CTE) offering. “If you take a look at how CS education is done, it’s a moving target,” Paley said. “I wish there was more money available for conferences.”

In order for teachers to go to such conferences, funding must be approved by the district office. Deggeller has observed the difficulties that have arisen due to lack of funding. “Computer science does have their own budget; they do get money right now even though they aren’t a department,” Deggeller said. “Every department wants to go to conferences to learn cool, new things about what they teach and the new ways to teach them. Many CS teachers, however, feel that they do not receive enough funding to attend these conferences and learn about innovative ways to teach.”

According to Laurence, funding allocation for CS does not necessarily rest on its status as a separate department. She clarified that it is her responsibility to approve any funding requests teachers make for conferences. “I make that decision. I have specific things I have in mind about what we were doing, and there’s a lot of teachers who have not had the opportunity to go to conferences for a long time,” Laurence said.

Laurence plans to address the issues raised by teachers like Paley while also providing opportunities and funding for all sections of education. “The whole purpose is so everybody gets to learn and get better, not just few select people,” she said.

The Board plans to open formal discussions on the consideration of the formation of a separate CS department later this year. PAUSD School Board Member Ken Dauber has historically been in support of efforts from the CCDAC to highlight CS in the district. “In general, I think that we should put more emphasis on CS,” Dauber said.

When it comes to the creation of a CS department, however, a decision has yet to be made. “I would be supportive of a move for creating more organizational capacity around that,” Dauber said. “But whether a department is the right answer or not, I really don’t know.”

Preliminary efforts to address the requests have already begun. “The district has been working this winter on developing and clarifying a three-year plan of what our goals are over time,” she said. “We plan on bringing computer science to a board discussion and for staff to look at it in the spring.”

The three-year plan, which is known as The PAUSD Promise, has “sprint goals” such as “analyze computer science and digital citizenship implementation practices” and “adopt and implement Next Generation Science Standards (NGSS) aligned curriculum” that they hope to execute over short spans of time.

The request for a CS department in Palo Alto is only a part of the bigger debate about the role of CS in schooling as a whole. For now, the question of CS’s role in modern high school education has yet to be answered. “All the problems when I was in high school are still present now, just now we have computing,” Paley said. “You can’t dodge it.”