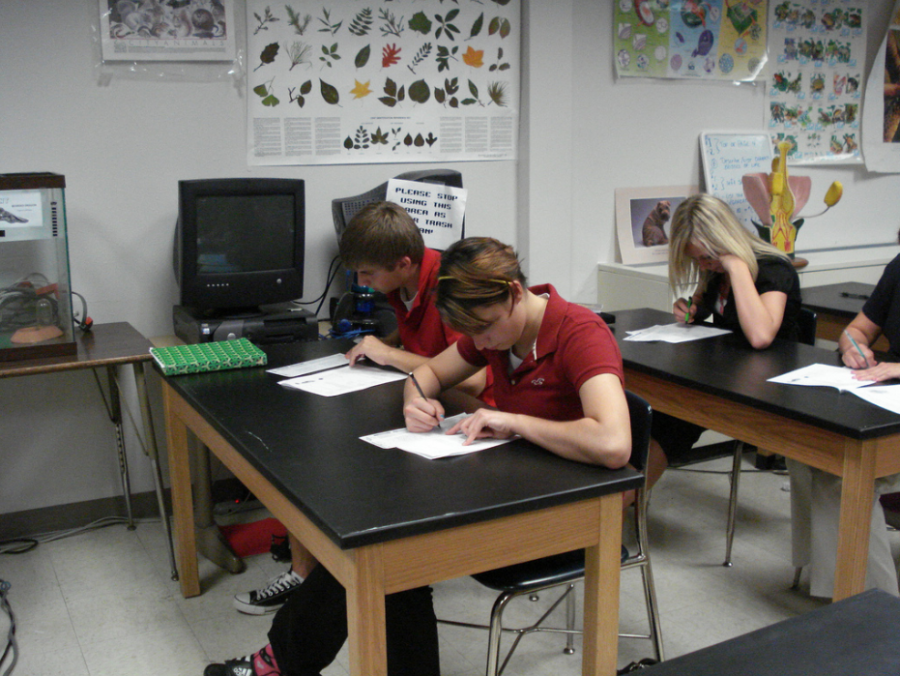 Starting on Monday, Mar. 25, juniors will be required by the state to take the California Assessment of Student Performance and Progress (CAASPP) to evaluate their college preparedness. A replacement of the Standardized Test for the Assessment of Reading (STAR) test, the CAASPP is interactive and adaptive, meaning that each time a student clicks on an answer, the program will calibrate their level and change the difficulty of the questions. Across the state, juniors will be taking this test, yet most Gunn students tend to opt out.

This increase in participation occurred largely because of the incentives that La Place and the school offered, which ranged from a barbeque to parking permits to prom tickets. “One of the changes that we made last year is to provide incentives,” La Place said. “One of the incentives that I think was fantastic was that we held a celebration barbeque for all the junior students who participated in all four tests. Another one was senior parking passes, senior prom tickets. Another was yearbooks, not having to pay, and more of Gunn swag like sweatshirts, t-shirts. They could choose what they wanted.”

Many students choose not to participate in order to sleep in, but some have been re-evaluating this notion in the weeks leading up to the CAASPP. “For me personally, I don’t see too much of a negative consequence of CAASPP testing besides not being able to sleep in,” junior Claire Cheng said. “I do want my school to look good in our community and I want it to have a high ranking. I just don’t really see a reason why not to take it.”

Still, the current level of participation is not enough to meet the state’s requirement, which results in many downsides for students, specifically on the California Dashboard. “Anybody looking in, which means anyone in the public which also means admissions boards, will look at Gunn High School, Palo Alto too, and could get the perception that we are not as academically excellent as we actually are because we will have a red status in terms of college preparedness under CAASPP participation,” La Place said. “Also, all juniors as they’re approaching the end of the CAASPP system and English Language Arts and Mathematics are asked to check a box: Do you want your scores to be shared with [California State University (CSU)] admissions boards with the purpose of determining your college readiness towards math and English classes at the college level? Checking that box does not affect your admissions, it doesn’t affect your CAASPP score if you don’t do well on the CAASPP, but by checking that box CSUs can gauge your level of college readiness.”

The data from the test also helps teachers understand whether their teaching methods are working and what specific areas they need to improve on. “There’s no direct relationship to school funding, but what there is a direct relationship to is our teachers being able to gauge the effectiveness of their instructional strategies,” La Place said. “We have built into our WASC [Western Association of Schools and Colleges] goals, our school-wide goals, using one of the data points as CAASPP data. We don’t really have it to a significant enough level for our teachers to say ‘yes, our teaching is constructive’ or not.

Teachers demonstrated their own frustration with the low CAASPP participation because they’re unable to accurately assess the level of their students. “In terms of our school data, we don’t see individual students but we do see how well as an aggregate our school is doing compared to other schools and other places and what they’re doing,” history teacher Laurel Howard said. “I hope that people take some personal responsibility and realize that this is something people need to do to contribute.” She added that while she does empathize with student stress at Gunn, the CAASPP is important to the school and should still be thought of as important.

According to La Place, there is a common misconception at Gunn that as a high-achieving school we don’t need to take the test, but nearby high-achieving schools still take it in much higher rates than Gunn students. “Our surrounding school districts that are comparable to us in terms of demographics, AP courses, and high rigor—Los Altos, Mountain View, Piedmont, [Menlo-Atherton]—all of those schools have much higher participation rates,” La Place said. “They are 98 percent, 95 percent, 92 percent, with the lowest one at 89 percent. Their juniors also have AP classes and finals and SATs, so it hasn’t academically hurt their juniors to take this test, and it won’t hurt ours.”

Howard works within her own classrooms to address that misconception and ensure that students understand the importance of the test. “Teachers have gotten a lot of literature about how important the CAASPP is and all of the things it can set our students up to do, and I just made sure that I communicated that to students,” she said. “I think that’s kind of one of the issues that we don’t know how important it really is, so I just brought it up to my students.”

The school’s goal for this year is that Gunn meets the benchmark. “My hope is that teachers will be very explicit this year, talking with students and juniors about why they think it’s a good idea for students to take the CAASPP,” La Place said. “I’m really hopeful that the success we had last year will carry this year, it would be fantastic for this year’s juniors to be the class that puts us at 95 percent. That’s a point of pride right there, and that’s what I’m hoping.”