The Ultimate Tree-o: The in-tree-guing story of how Mr. MacLean and Mr. Ledgerwood planted an acorn 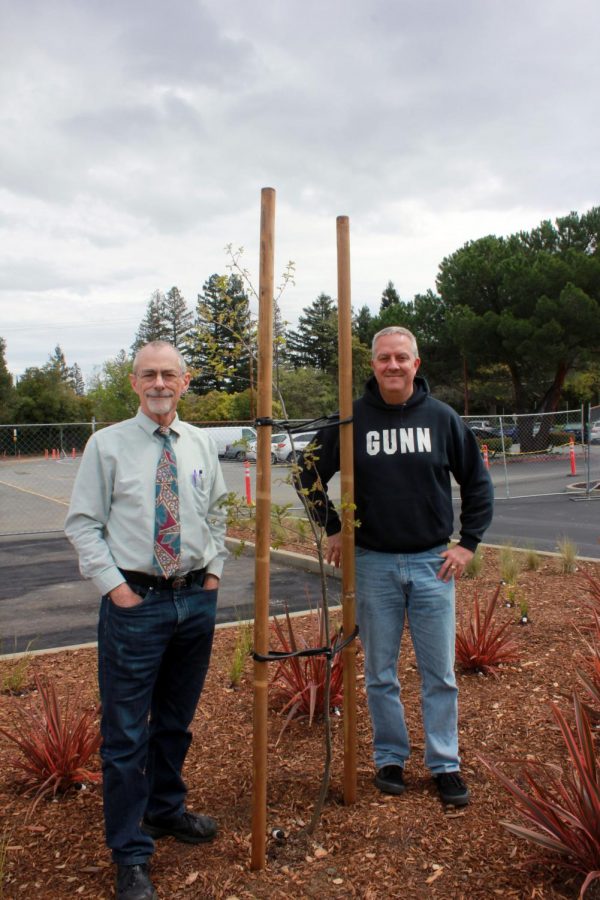 Behind the rusty fences that guard the construction zone and near what will be the new drop-off area, there is a young oak tree sapling slowly reaching the height of the nearby trees. Though just a standard tree to most passersby, it is rooted in science teachers Eric Ledgerwood and Alec MacLean’s hearts. The acorn that the small tree grew from was passed down from Ledgerwood to MacLean nearly six years ago.

The original acorn came out of an activity for Ledgerwood’s Advanced Placement Environmental Science (APES) students. “I collected acorns from the big oak tree on campus in the front of the school, and I basically just germinated them here in the classroom,” Ledgerwood said. “I gave them to my AP Environmental Science students to go out and plant a tree someplace in the world.”

After collecting many of these acorns, he stored some in the science classroom preparation area, where MacLean later came across them. “Mr. Ledgerwood had a whole bunch of them in pots in the prep area, and he didn’t really have any plans for them,” MacLean said. “I’ll grow anything anywhere, so I took this thing home, and that was probably five, six years ago.”

MacLean kept the tree in his yard, trimming and pruning it to help it thrive. “It was quite healthy and happy in my yard,” MacLean said. “I’d go through and I’d trim it up because oak trees like to go sideways a lot. I’d prune it up, and it just got taller and taller, and I didn’t know what I was going to do with it.”

When MacLean passed by the construction area on campus and saw workers planting trees, an idea sprouted in his mind. “I saw them planting out there and I went, ‘Oh,’ and I just connected all the dots,” he said. MacLean then contacted Assistant Principal Margaret Reynolds about his idea to plant his tree at Gunn. “I said, ‘Would you be interested in having it planted?’ and she loved the idea,” MacLean said. “She talked to the district arborist, and they all thought it was a great idea.”

Almost a year later, MacLean emailed Reynolds with a reminder about the plan. “She got back to me and says, ‘Can you bring it in tomorrow?’” MacLean said. Over half a decade later, the acorn was finally returned to its roots. “I brought it in and parked it out by the trailer,” MacLean said. “It had been in my yard for years, and when I dropped it off and said goodbye to it, it was like giving away a puppy.”

MacLean and Ledgerwood see this tree as a piece of history for people to remember many years from now. “Long after everybody’s forgotten our names, there may still be a tree here on campus,” MacLean said. “I sort of do have this little fantasy of people discovering its history again long from now.”

Ledgerwood believes that the seed’s development acts somewhat like a time capsule. “I think anything you see literally starting from a seed and then becoming something that has the potential to be around for 200 plus years is pretty incredible,” he said.

From an acorn to a new sapling growing in the construction zone, it seems that the story has come full circle. “The plan just fell into place,” Ledgerwood said. “I love it when a plan comes together. It just kind of magically happened.”