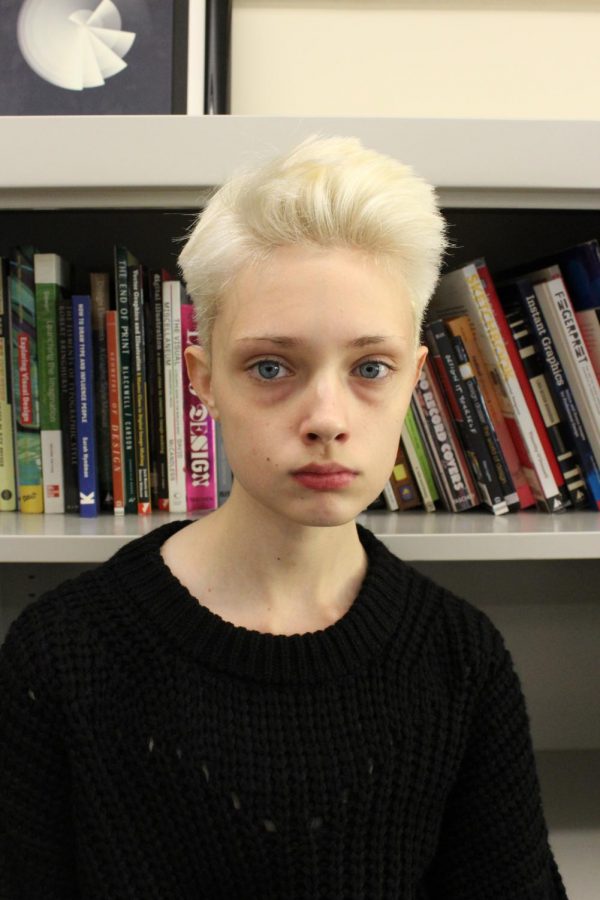 Senior Vincent Lomeland was only eight years old when they first dreamed of becoming a writer. Every now and then, they would jot down fragments of an ambiguous story’s plot and fractions of a character’s life—a young and naive, but active, attempt to begin their writing career. Little did Lomeland know that around ten years later, these seemingly unconnected blurbs of ideas would lead to their first novel: “Doctor Secretion.”

A cautionary tale with a tint of tragedy and a dash of science fiction, the story takes place in an unspecified American town in the mid-1900s. The main character, Arlo Faustus, is a 22-year-old university graduate with a keen knack for science. Described as the “persona of a metaphorical doctor,” he leaves his university with a sense of obligation to preserve internal and external beauty of life, both in the literal and metaphorical sense. He soon becomes overwhelmed with a persistent desire to travel back to the past and to the times he feels are truly important.

However, Faustus’ dreams of preserving temporary qualities of life soon go astray. During the early stages of his experiment, his goals—and the means of achieving them— are well-meaning. He writes stories and tries to “correct” people, but eventually begins to abduct his subjects and create his own world where his imagination turns into reality. “[Faustus has] a sudden realization that his writing makes no changes outside of his own ‘world’ on the page. No matter how much he writes, his subjects still become depraved through experiences outside of Faustus’ control,” Lomeland said. “Thus, he must be the one to control them.”

Throughout the later stages of the story, Faustus glorifies children and all of their innocence, for most of them are yet to be corrupted by society. With his own wonderful memories of childhood as a source of motivation, he finds the embodiment of youth and innocence, as well as a visual model for the world he wants to create, in children.

Throughout his quest, readers will encounter a myriad of personas that Faustus uses to identify different parts of himself. He is a prince on one occasion, based on a compliment he was previously given. On another, he is a woman and feels a yearning to be a wife. He slowly brings these pieces of himself to life and becomes the story’s hero and villain. “I want [readers] to feel sympathy and even pity for him, because he had decent intentions in the beginning,” Lomeland said. “He loses his morality and does terrible things. But, does that make him a terrible person?”

“Doctor Secretion” takes place on a relatively wide scale of settings. The novel begins slowly, with Faustus commuting between his home and his university, where he meets his teacher, Mr. Majors, and Doctor Herr Geschoss. As his plan unfolds further into the story, his subjects, like child Felix Sexton, begin to appear, and readers find themselves traveling back in time with Faustus as he relives his past and creates his own space and time-zone. In roughly 80,000 words, Lomeland hopes readers will take one lesson with them: time marches on for a reason. “You can’t keep going back. The past was meant to happen in the past, and you’re supposed to move forward,” Lomeland said. “We can’t live in a world where we’re trying to move backward.”

Lomeland began writing “Doctor Secretion” in June, but the path that led them to write their first novel began much earlier. While “Doctor Secretion” is a purely fictitious novel, the inspiration behind it is derived from Lomeland’s personal experiences of fear of the unknown, which are comparable to the fears Faustus grapples with. “I sometimes don’t want to move forward,” Lomeland said. “I want to preserve myself in the moment and not keep going on into a future that I don’t know [anything] about.”

Another source of inspiration for Lomeland’s novel is their therapeutic relationship with writing. “I’ll take a small piece of my day, maybe if I feel upset or hopeless, and I’ll begin writing,” they said.

While completing a first novel may seem daunting to young writers, Lomeland’s self-discipline, productivity and—most importantly—their natural devotion to writing led to an efficient writing schedule over the summer. They made writing a daily habit by setting targets; originally, Lomeland aimed to write a minimum of 1,000 words per day, but they soon went over the limit and wrote over 5,000 words a day. Looking back, they believe that their technique, while it wasn’t the most easy-going, led to a completed novel by the beginning of the school year. “I’m productive to a fault. I overworked myself completely, and I didn’t take care of myself,” Lomeland said. “But, I put myself in my work. There’s a quote about you bleeding onto the page as you’re writing, and that’s what I did. I lived through my writing and created a world that I wanted to be in.”

“Bleeding” onto the page as they wrote, Lomeland found their novel to be a helpful outlet for pouring out their personal experiences and feelings. “During the bits that were based on emotional parts of my life, I found myself in tears as I wrote because it was a therapeutic process. It was hurting me to write it, but it was in a good way,” Lomeland said. “It was my creative transcendence, apotheosis and climax just on the page. It was me visualizing how I felt, almost in a psychodynamic approach.”

For any young writers having difficulty staying productive, Lomeland suggests focusing on discipline. “As long as you’re productive and you can use your willpower toward [writing], it’s something you can do. But, if it’s something that you aren’t completely interested in, or you really don’t want to go all the way with it, I don’t think it’s possible to finish a novel.”

While Lomeland’s dedication led them to a completed novel, they still had to endure writing complications. “There was one chapter that I completely took out and had to start over because it made no sense in the context of the book,” they said. “So, I did take out some parts of my book, but it was just cleaning things up for the most part.” Lomeland also faced the crippling concern that all writers face: writer’s block. “If you write in chapters, you can work on something completely different that happens earlier or later in the book from the spot that you’re currently working on,” they said. “It gives you more opportunities to keep writing.”

Lomeland, whose preferred genre of writing is fiction, believes a certain degree of individuality is essential for turning their imaginings into words on a page. “Trying to write something completely fictional is uncanny. You’re trying to create something realistic, but [often] you separate it from your reality so much where the readers can’t envision it,”Lomeland said. “You need to have at least some portion of [your story] in reality, so it’s something we can all relate to.”

Lomeland is unsure if they want to self-publish. A major source of their hesitation to publish was from a perceived lack of public interest. “I thought, if I self-published, I wouldn’t hit a very large amount of people. So, I wouldn’t get as many people reading it and it wouldn’t have very much promotion.”

Lomeland advises any prospective readers of “Doctor Secretion,” if the novel becomes published in the near future, to dig into the story without any preconceived notions of what the pages may entail. “I believe in a blind experience,” they said. “I want them to just feel the raw power.”