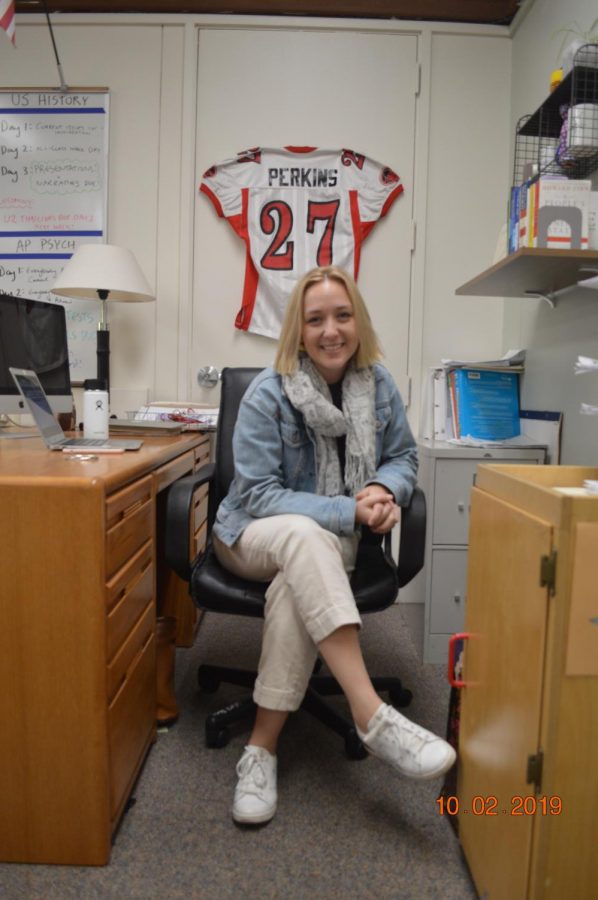 When most students graduate from their respective high schools, they don’t think they’ll ever find themselves returning. Yet, Gunn graduate and social studies teacher Haley Perkins got the chance to bring her unique perspective as a former student back by becoming a teacher here.

Since she was already familiar with the culture at Gunn, Perkins’ transition to teaching was relatively smooth. However, she did encounter many changes in her former high school, from the physical layout of the campus to the introduction of the wellness center and new conversations around mental health. “It was good for me to hear that it was something that was really important to teachers, and that teachers were aware of how much work they were assigning and making a concerted effort along with the administration and other student groups to focus on student needs,” she said.

Perkins’ primary motivations for coming back to Gunn stemmed from her desire to teach in a high-pressure environment similar to the one she experienced growing up. “[I wanted] to start to uncover what’s going on within these communities and be a part of the many solutions that are being produced as a result of that,” she said.

While her experience differed from students today, she still has a unique connection to them. “I don’t have to try and imagine what it’s like being a Gunn student. I know,” Perkins said. “I think it’s valuable in having empathy for the many pressures that we all might be feeling.”

Her experiences outside of Gunn have shown Perkins that the school can sometimes be a bubble, creating unhealthy and unfounded feelings of inadequacy in students. “When I left that environment, I was like, wow, I have something to offer here in this new place,” she said. “It made me much more comfortable being myself and expressing my thoughts and opinions, because I wasn’t as worried about not being the smartest, not having the best comments or not sharing the most insightful thing.”

Yet, Perkins thinks back fondly to her time as a Gunn student, particularly to the connections she made here. “Gunn, more than most high schools I’ve seen, does an amazing job fostering lifelong friendships,” she said. “It’s great to see people you grew up with growing up even more.” From homecoming to weddings, the friendships Perkins built in high school have grown with her throughout her life.