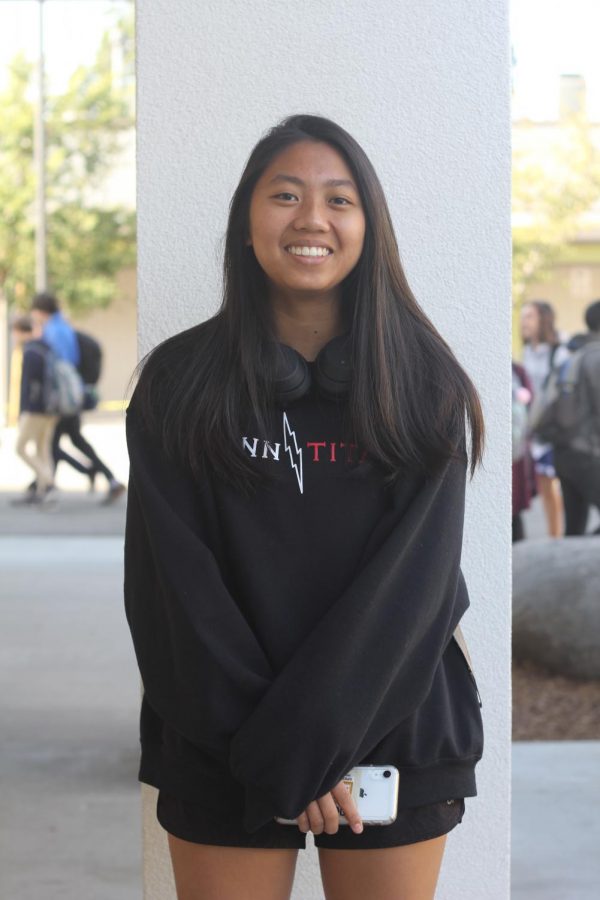 Late at night past her bedtime, when the only noises that could be heard were the snoring of her brothers deep in sleep and the chirping of the crickets outside, nine-year-old Nina Chen sat cross-legged in front of her mother’s sewing machine. Without the internet’s help, Chen was left with only one option: fiddle with the machine until she could make shirts with fixed buttons come out from the other end. Chen would soon learn that the power to create clothing was not contained in the machine itself, but within her own hands.

Chen, who is now a senior, has always been naturally drawn to admire different fashion styles as she passed store windows. “I used to be into really high-end fashion and how people designed and embroidered those elaborate pieces of clothing,” she said. “So, I would look at the clothing and break them down in my head to figure out how each piece was created. Then, I would test it out with some materials, and I’d be like, ‘Oh, I want to try to make that with this piece of fabric.”

In second grade, Chen attended a colonial fair where where students were able to work with embroidery and needle work. “I just really liked sticking my needle through the fabric and making nice designs,” she said. “I officially started sewing when I was in late elementary to middle school when I got a decent sewing machine. I would start to make small clothing for my dolls, and then I upgraded to a bigger sewing machine.”

Chen’s lifelong interest in fashion may seem like destiny, but the combination of cultural stigma and gender biases had often dissuaded her from pursuing it further. “There’s this Asian pressure that you shouldn’t do anything artsy, and that you should do business or [science, technology, engineering and mathematics] instead,” she said. “I thought it’d be cool if I could do fashion design. But then I thought, ‘I’m probably going to get disowned by my parents if I do fashion design.’ So, I went on and off of wanting to do fashion but also not wanting to do fashion.” Chen’s uncertainty was highlighted by her own siblings. “I was very much a tomboy when I was younger because I grew up with two brothers, so I didn’t want to be different from them,” she said. “Fashion design was out of the question if I wanted to fit in with them.”

Chen now sees her passion as self-sustaining. “Now, I don’t really care,” Chen said. “I do what I want. If it makes me happy, then I’m going to go do it.”

Her dedication and persistence in expanding her skills will continue into Chen’s college life, where she plans to major in fashion design. Later, she hopes to start her own fashion line and create affordable, sustainable clothing in order to help the environment.

In the meantime, Chen spends her summers teaching elementary and middle schoolers how to sew clothing to donate to charity.

Chen has indeed come full circle in her fashion design journey. She is no longer the second grader that was completely clueless about how to make simple pieces of clothing. Now, Chen spends her hours unveiling to current second graders the exact magic that she once found when tinkering with her mother’s sewing machine in the second grade. “It’s really cool to have little kids look up to me and be like, ‘Oh, my gosh. She made that.’ I say, ‘Yes, I did make that. And so can you.’”