Parents should not lie about Santa 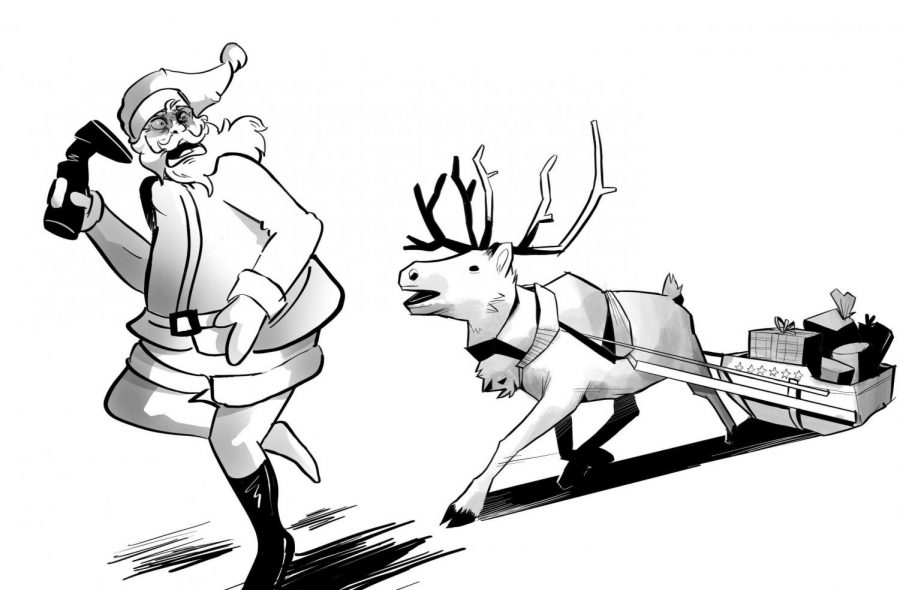 At last, we can look forward to the holidays, bringing with them twinkling strung-up lights, cookies warm from the oven, festive garlands twined around every pole and, for some reason, old fat men with fake white beards. Every year, some parents will go to extreme measures to keep their child’s faith in Santa Claus alive, from taking pictures with faux Santas at the mall to responding to letters addressed to the North Pole. Although the Santa sham is meant to bring magic to kids’ holidays, parents should not lie to their children about Santa because it improperly incentivizes good behavior while ensuring disappointment and broken trust upon discovery.

From the start, the belief in Santa Claus incorrectly establishes the desire to behave in young children. Supposedly, Santa gives “nice” children presents and “naughty” children coal. While this might seem like a sweet deal to keep children in line, it causes kids to play the role of dutiful children only for the sake of presents. According to a Psychology Today article, using a reward system, or operant conditioning, limits development of intrinsic motivation. In this case, the belief in Santa Claus prevents children from voluntarily behaving. This also creates problems when children find out that Santa Claus is fictitious. How will parents maintain order without the leverage of Santa’s judgement? The belief in an omniscient authority causes children to behave to impress Santa, not their parents, with the end goal of presents rather than mutual respect.

Furthermore, veracity in parent-child relationships is key, and instilling a blatant lie in a child’s most treasured beliefs is a recipe for disaster. At a young age, children build a strong foundational trust in their guardian figure. Keeping up the ruse of Santa Claus forces these trusted authorities to lie to their child every year, and the discovery of this deception can easily undermine the credibility of parents. In addition, it negatively affects the child’s perception of truthfulness. A study published in Frontiers in Psychology showed that children who experience lying from their parents have tendencies to lie later in life. Unbeknownst to parents, the Santa Claus charade may very well be detrimental to childrens’ emotional development.

Kids will inevitably uncover Santa Claus’s falsehood. This poses the final issue, the elephant in the room: what do parents do when their children find out? Some kids may be deeply distressed to have their childhood belief debunked. The unpleasant discovery may even occur in a humiliating public situation. After finding out that their beloved idol never existed, kids will be inclined to remember each moment of joy with a grain of salt. Every time they eagerly anticipated Santa’s arrival, their parents were only playing along. The discovery of the Santa Claus fallacy not only shatters childrens’ confidence in their parents, but it also makes for an up-setting letdown.

On the other hand, some parents may believe that Santa Claus is necessary to bring magic to every Christmas. After all, Santa accomplishes the inhuman feat of squeezing down millions of chimneys to deliver every child’s presents in one night, riding in a flying sleigh led by reindeer. It’s no wonder that he’s an inspiring figure for children’s imaginations. However, the true magic of Christmas lies not in a quantity of presents or a mythical figure, but rather in its simple joys, such as generosity and family time. According to the American Academy of Pediatrics, empathy and positive interactions make a lasting impression on children by building resilience and a sense of security. Ultimately, the spirit of Christmas is created by these memorable connections.

In short, Santa Claus is a fabrication that does more harm than good. It teaches children that being nice should be solely motivated by reward, and the deception ruins the holiday and the parents’ trustworthiness when the charade is up. The honest truth is that each present comes from a loved one who devoted time, consideration and care into giving it. Parents should encourage their children to cherish these invaluable gifts rather than materialistic presents from a fabled figurehead of Christmas.

—Wang, a sophomore, is a Forum Editor.