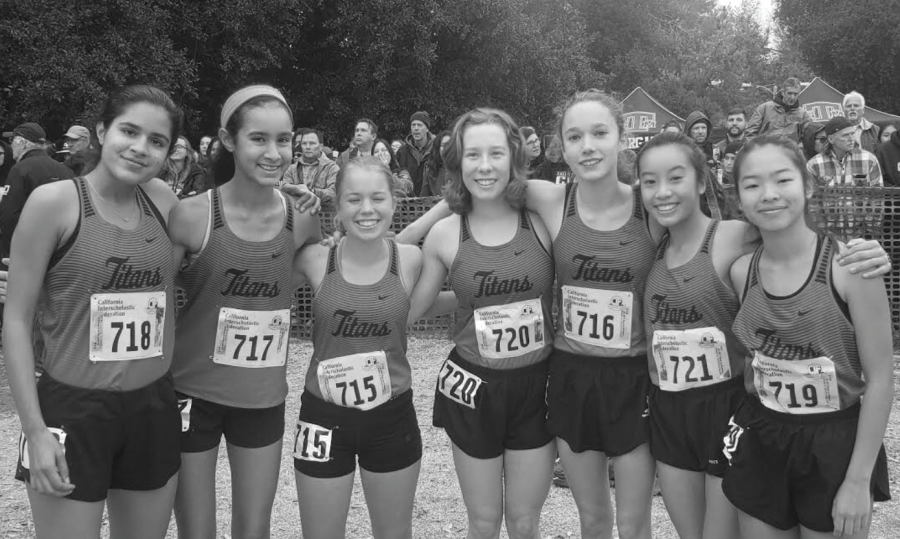 On Nov. 30, the Gunn girls cross country team competed at the Cali- fornia Interscholastic League State Championships meet in Woodward Park, Fresno. Gunn, a Division 1 team, finished in 20th place out of 21 teams. This year marks the ninth time in ten years that members of the cross country team have qualified for the states meet. Both girls and boys teams competed at Central Coast Section (CCS) championships the previous week, with the Gunn girls winning second place. As a result, seven members of the girls team moved on to state championships.

Senior and team captain Sophie Alexis, who was among the state quali- fiers, described the event as a surprise. “Not to flex, but I think we did really well,” she said.

Alexis says she is grateful for the recent success despite the challenges that the team faced throughout the season. In the past year, two coaches have left Gunn cross country. “[It] was kind of unexpected and we did our best there, even though the season was really chaotic,” she said. To Alexis, making it to the state championships was already an incredible honor. “I wasn’t nervous because we knew that we were mostly there to have a good time,” she said.

Junior Moyu Shimada describes her experience at Woodward differ- ently. Shimada, who also qualified for the meet, says that competing at state championships was extremely stress-inducing. “The atmosphere was very tense compared to all the other meets we’ve had this season,” she said. “I was nervous before the race, and a part of me didn’t want to race, but when I got to the starting line, I was just proud that we made it to states.”

Junior Izy Hilbert agrees, citing the dedication of this year’s varsity team. “There was a slim chance of us making it, but everyone stepped up their game helping us pull second place in CCS,” she said. Hilbert says that because of this experience, she looks forward to competing again next season. “We can definitely qualify again and possibly score even better,” she said. “As we keep on recruiting more runners, we will be able to maintain our strong team.”