City cracks down on single-use plastics 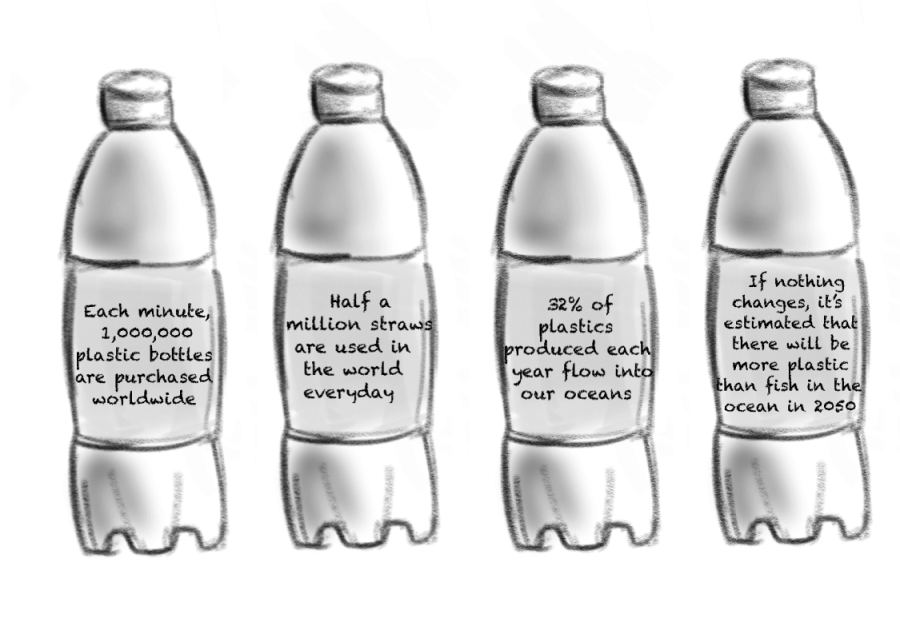 Palo Alto City Council voted on a single-use plastic ban that will affect the entire city, including the Palo Alto Unified School District which will go into effect at Gunn starting Jan. 1, 2020. This will mostly affect the cafeteria, where all of the plastic that is currently used for a variety of things such as containers and lids will now have to be compostable. Starting Earth Day 2020, there will be a soft runout of reusable silverware kits given to each student.

According to senior Swati Goel, the president of the Green Team since her sophomore year, single-use plastics have a very damaging effect on the environment. Wildlife consumes it and will either die or become severely ill. Plastic can take thousands of years to biodegrade, depending on the type of plastic, and some plastics break down into microplastics that sit at the bottom of the ocean floor which makes them nearly impossible to remove from our oceans. Thus, single-use plastic harms our ecosystem, especially marine life that is constantly surrounded by waste.

Goel has been trying to raise awareness about the harms of single-use plastic since first joining green team. “For the past two years, we’ve had different events at Turkey Feast so people know to bring their own utensils or sustainable utensils, and we do raffles and things like that,” she said. “Our main involvement in the single-use plastic ban is trying to gain student support and awareness, and also talking to the school board about how we can make this happen.” In previous years, there have also been more advancements in trying to replace the plastic in the cafeteria with a more sustainable material. “Chloe Schraeger, who graduated last year, was able to get the lunch containers in the cafeteria replaced to something more sustainable in regards to plastic usage,” Goel said. “It might be a small thing, but I do think it’s really important that people start to make these small changes in their lives because ultimately, that’s what needs to happen.”

Students at Gunn began raising awareness for plastic pollution through Green Team, but also through classes such as Marine Biology and Advanced Placement (AP) Environmental Science. “We got involved at Gunn predominantly because of the atrocities that have been occurring in the environment with regards to single-use plastic and plastic pollution in general,” AP Environmental Science teacher Eric Ledgerwood said. “It was really [marine biology teacher Neeti Schworetsky] and myself who were working with the Monterey Bay Aquarium for three years in a row in their ocean plastic pollution summit, which was trying to get schools engaged with trying to reduce single-use plastics. As a school, that was how we started getting students involved in Marine Biology and [Advanced Placement] Environmental Science.”

Goel says that though converting from plastic to more eco-friendly material might not seem significant, student efforts would have been worth it if they save even one animal. Goel pushes this idea and also hopes that students understand that their actions do matter. “It’s really important that students learn about this because throughout your lifetime, you can have a measurable impact,” she said. “If you just think about the amount of plastic and visualize how much plastic or waste you could save it’s a pretty significant amount. It’s really important for students to be aware of the changes that are happening in the community, and then try to implement those into the place they head off to after high school.”

On the other hand, Ledgerwood also hopes students will consider how much society depends on oil taken from the Earth to make into plastic that fuels our everyday habits. Students around campus often are given plastic straws or forks to use and throw away right after they eat, which is the oppo-site of what should be happening, according to Ledgerwood. “I’m hoping that students will really think critically about their use of material items, and really to question constantly the authorities that give them something that isn’t sustainable, reusable or somehow benefit the planet in someway,” he said. “I want them to really think about why someone is giving them something they’re just going to throw away after they use it barely once, like a plastic bag you get at the store; it doesn’t make sense anymore.”

In the future, Ledgerwood suggests students work to create their own reusable utensil kits, which would include reusable forks, spoons and straws, and incorporate them into their daily habits. That way, students could effectively avoid reliance on plastic utensils.

Senior Kyle Matthys believes that Gunn will start to implement more environmentally friendly policies. “I’m excited to see future changes towards the lunch lines and trying to push for solar panels at the school,” he said. “I think this is the first step in changing Gunn to be very environmental. If every kid had their own reusable kit that would have a very positive effect on the environment.” The Green Team is working to get more trash bins around campus due to the fact that there is mostly compost and recycle, but students should know exactly where their waste is supposed to go.

With such a small change happening to Gunn, there’s hope that this will translate from school to student’s homes and eventually become habit. “Small changes multiplied over a lot of people makes a big difference,” Goel said.