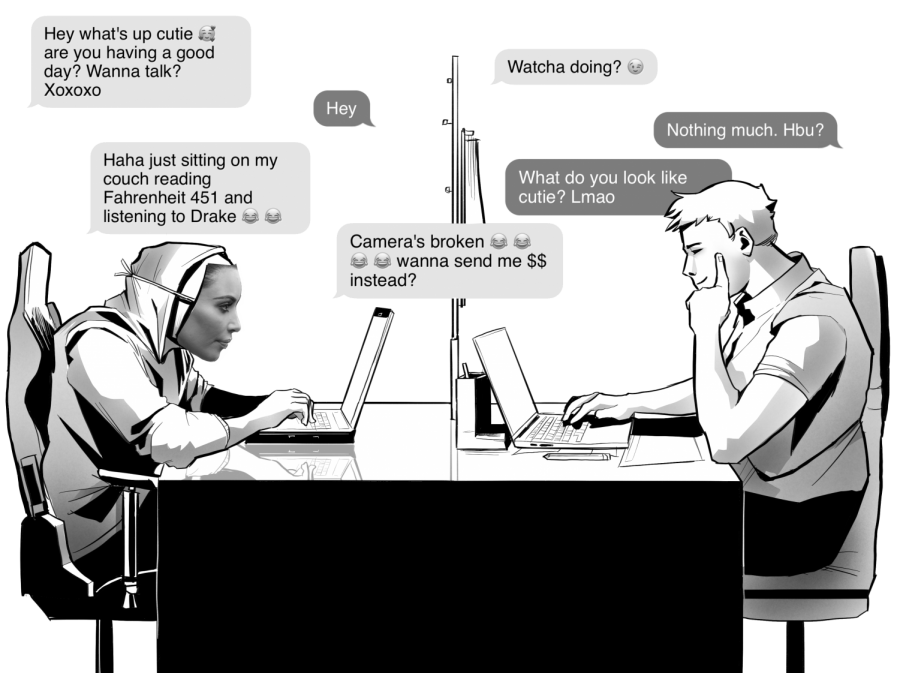 For many, dating apps can induce a boost to their self-esteem. Being in a “match” means that two people think the other is attractive, a step forward in bold- ness compared to the stress over mutual attraction found in many high schools. Tinder’s current terms of service require users to be over the age of 18 years old to use the app. Many teenagers, however, stillfind themselves on dating apps, whetherthey’re craving validation or just looking for a way to pass the time.

Catfishing, which often happens on theinternet, is the act of deceiving someone by pretending to be a person
who you aren’t. It is most prevalent on dating apps and social media

One sophomore, who was granted anonymity due to being legally underage for
using dating apps, said that they use Tinder. “It generally has younger people and less old creepy people,” they said via text. They decided to download it out of bore- dom. “I wasn’t seeking anything out of it,” they said. “All my older cousins had Tinder and I would always help them choose and message people, so I think that’s where I got the overall idea.” They went on to say that their intentions were less than serious. “I pranked a lot of people,” they said. “I think the main reason I did it was because I was really bored.”

Although the sophomore doesn’t advise teenagers to join dating apps, they prefaced their warning by saying that when people get older, dating apps aren’t a bad option tofind love. “Honestly, I know a lot of peoplewho have been in great relationships with people that they have met on the internet,” they said. “If you’re of age, go ahead, but I don’t think there is any point in being on an app such as Tinder if you’re not looking for a relationship of any kind.”

Despite their choice to use Tinder, they still warn others about the dangers of online dating. “The whole aspect of uncertainty is frightening, especially as a teen- ager,” they said. “There are a lot of weird people out there and some people have fake profiles.” Tinder’s terms of service are nothing but words which can be ignored or followed by choice. “Middle schoolers can end up talking to 20-year-olds because of a quick lie about age and honestly, it’s not only untruthful but it’s also very sexualizing,” the anonymous source said.

Sophomore Reva Shah has had her experience with catfishing. “I got cat-fished one time when I was in ninth grade,”she said. “It was a really bad experience and it’s sad because it was a close friend of mine who did it to me.”

Shah recounted her run-in with catfish- ing. “I get this Instagram story reply from [someone] I thought was this girl’s brother and the person messaged me saying, ‘I like your story, you’re so pretty and you should come to my house to meet me,’” she said. Shah was wary but still appreci- ated the compliment. For many people, a compliment can feel like such a boost inconfidence that they ignore the suspiciouscircumstances that surrounded it.

Her friend did finally come clean to her about the whole ordeal, but Shah didn’t findit as funny as her friend might have. “It was really uncomfortable,” she said. “I think she thought [that] playing with my heart would be fun, but it wasn’t [fun] for me.”

There are plenty of reasons why some- one may make a fake account, but the majority of them boil down to one single reason: insecurity. “People are insecure sometimes,” Shah said. “There’s just like an alter ego to them. So if their life is failing, they can rely on that to feel better.”