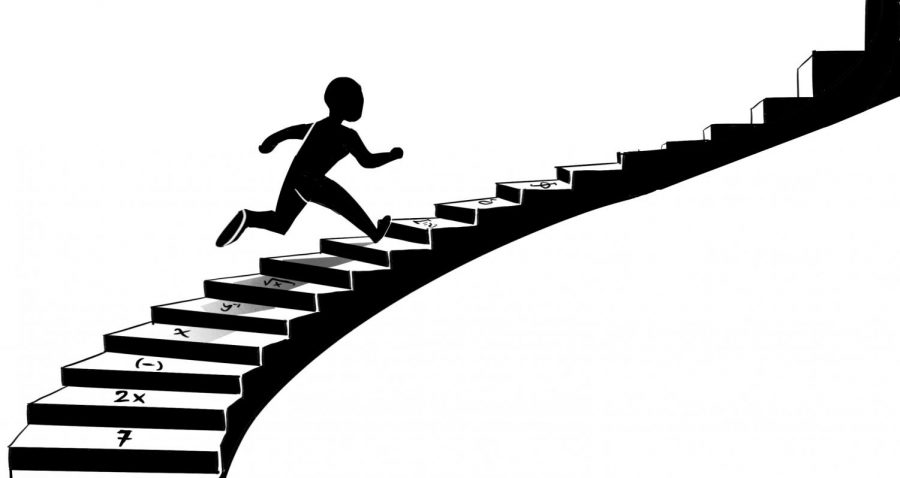 I enjoyed reading the full page math spread in the Forum Section of The Oracle on Friday, Dec. 6. I was happy to hear that our existing math infrastructure in Palo Alto Unified School District (PAUSD) served the two student authors, Ms. Suzani (who accelerated by skipping a year of math in middle school) and Ms. Moraes-Liu (who will impressively complete five years of math in four years by taking Geometry A over the summer) well in their math adventures. I also enjoyed reading the parental point of view from Ms. Cohen and Ms. Rosen and hearing their concerns about our current system. By the time you read this, the new PAUSD Middle School Math Vision will have been released, which I imagine may ease some parental concerns, while perhaps bringing up new ones. I thought I might add one more voice to the conversation—my own—as the Instructional Lead of Mathematics (this is my fourth year in that role) and as someone who has taught math at Gunn for 25 years.

I’d like to start by saying that there are students in PAUSD (many students perhaps) who absolutely should be accelerated through our math curriculum. If a student’s motivation for acceleration is that they love math and are feeling unchallenged in their current math class then I fully support such a decision. It’s the students who are accelerating either because their peers are doing it or because they think that it makes them a better college admissions candidate that I would encourage to rethink acceleration.

I particularly take issue with a quote from Ms. Cohen and Ms. Rosen’s guest column that “skipping carries significant academic and social benefits.” In my time in PAUSD I’ve met plenty of students who are thriving via an accelerated program (Ms. Suzani is an example). I’ve also met many students who are miserable and struggling to keep up. These students—in their words—accelerated because it’s what their friends were doing or (even worse) because a private college counselor has told them it could help them get admitted their dream University. Just this week I was talking to a Gunn senior who is currently enrolled in the Dual Enrollment Foothill College course Multivariable Calculus (the result of skipping a grade of math in middle school). She told me directly: “I wish I’d never skipped. It created undue stress in my life, and I don’t even love math that much.” Furthermore, our college counseling guru at Gunn, Ms. Linda Kirsch, has told me on multiple occasions that most college admissions offices do not want to see extra math on your transcript, nor are they impressed by a student who takes Calculus “early.” In addition, most colleges are going to insist that any math-major retake a course like Multivariable Calculus again on their campus! It’s enough to ask yourself, “what’s the hurry”?

Another reason for a student to reconsider acceleration is that it could lead to a weaker mathematical foundation. Though a student might show proficiency on mathematical content, such as Algebra, they may be lacking in other areas that are important to becoming a great mathematician. The Common Core defines these non-content areas as “mathematical practices.” These practices include mathematical modeling, constructing mathematical arguments and problem solving with perseverance, among others. I’ve met many students who can solve quadratic equations with 100% accuracy, but struggle to make sense of a real life word problem about parabolas. Slowing down a student’s math education can result in a deeper foundation of both content and mathematical practices.

The new California Math Framework, which incorporates the common core standards, will be released in 2021 and will emphasize a “slower and deeper mathematical education.” This is the philosophy we’ve tried to weave into the new Middle School Math Vision (presented to the PAUSD School Board on Tuesday, Dec. 10). It’s true that some other districts are accelerating more math students than we are. I’m not sure of their motivations and I have no proof that their curriculum is “faster and shallower” than ours. All I know is that at Gunn we are trying to grow deep mathematical thinkers who are well-balanced in life and joyful, confident problem solvers. And for the students who crave an accelerated “math path” to be joyful mathematicians, we have that option as well.