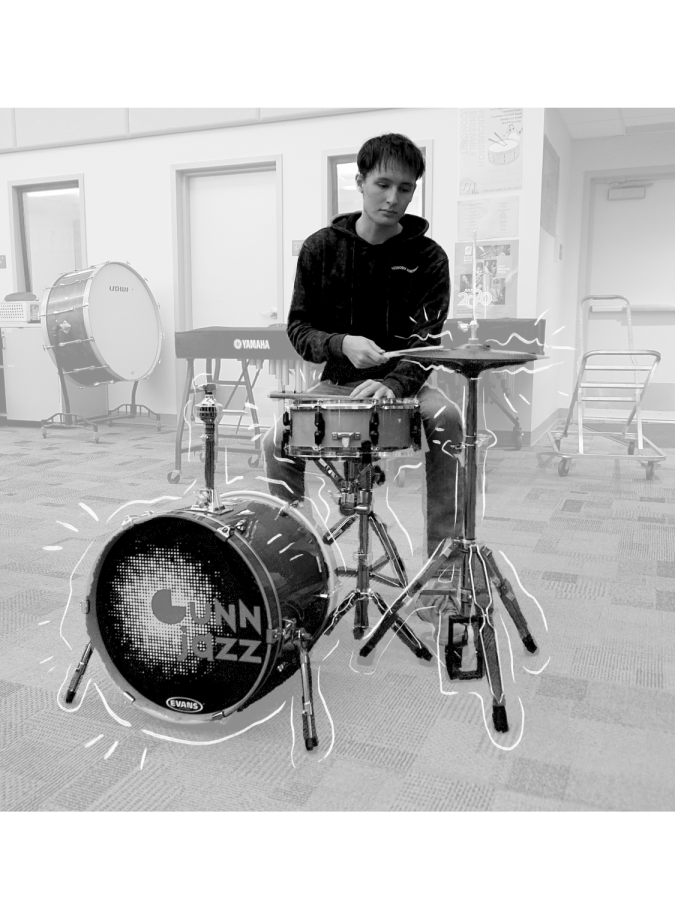 Clashing cymbals, booming drums, a squeaking horn and a voice with an exaggerated drawl: it was all music to his ears. Of all the performances in the classic movie “Mary Poppins,” it was Dick van Dyke’s impressive one-man band that convinced senior Aidan Roessig that music could, in fact, be cool.

Shortly after, he began drum and guitar lessons. Now, Roessig has grown as a musician to both perform and compose, yet he considers himself to be a relatively unknown artist due to his distinct style of music. “It’s instrumental,” he said. “It’s not just metal. It’s not just jazz. It’s a big mix of different styles I listen to. I don’t really set boundaries for myself.”

Accompanying him through his studies are his mentors, both inside and outside of school. “My drum teacher Brad Kaiser pushes me to learn different styles of music,” Roessig said. “That way, I’m versatile and can play for different people.”

As a musician at Gunn, he participates in the jazz “big” band. There, Roessig has drawn inspiration from band teacher Todd Summers. “He’s got a super, super good work ethic,” Roessig said. “He’s a great guy and he makes me actually enjoy doing music at school.”

Music, however, has a demanding schedule. “It’s a big time commitment,” he said. “I know a lot of people think that if you go into music, you’re getting money and not doing much work for it, but it really takes quite a bit of work. Instead of doing two hours of homework, I have to do two hours of practice.” For drums, vigorous playing can even lead to sore arms.

Regardless, he always looks forward to the sessions with just him, his instruments and a world of silence to fill. “It makes everything more enjoyable,” he said. “I’m less stressed because I have something I can go home and do every day. It’s also really rewarding to see myself get better every time I practice.”

Roessig aspires to continue his musical career in college and beyond. Piece by piece, he hopes to encourage others to appreciate all types of music, just as Dick van Dyke’s haphazard symphony did for him.