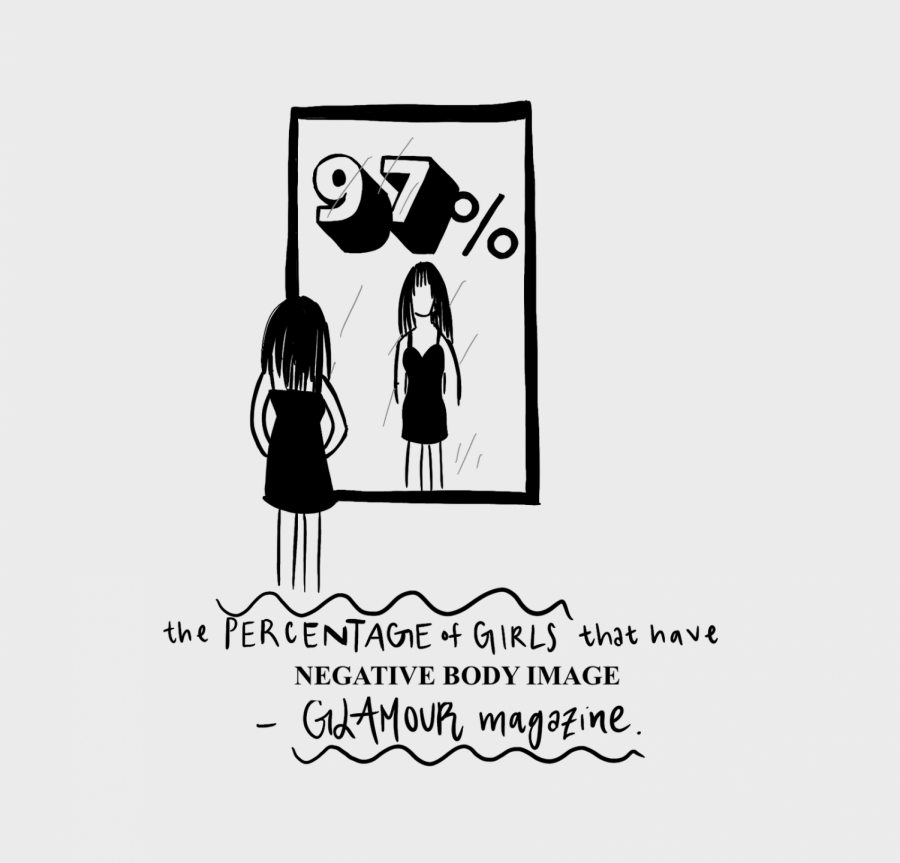 “One size fits all.” This phrase, used by stores to bypass making sizes inclusive for different body types, represents the negative impact that modern fashion has on teenagers around the world. While the phrase is not seen everywhere, it stills engenders body image problems for many. Clothing stores such as Brandy Melville force people to perceive only one body type as acceptable, leading to repercussions such as body shaming, insecurities and sometimes even eating disorders and mental illnesses.

The fashion industry has long been flaunting exclusively taller, slimmer body types by creating clothes that solely fit that appearance. For example, Brandy Melville has received a lot of backlash for only producing clothing items for skinny girls. The store is said to be targeted toward teenagers, and has been harshly criticized for providing clothes that only fit in the small range. For instance, the popular Cara Skirt has a circumference of 24 inches around the waist, yet the Centers for Disease Control and Prevention (CDC) reports the national average as 32 inches for teenage girls ages 14 to 18. This large disparity makes it obvious that these clothes are marketed to a very select group of people. In fact, according to the distribution of waist sizes, only 5% or so of U.S. teenagers would fit a 24-inch skirt. Unrealistic ideals like these spark insecurities in young women, creating the harmful idea that a so-called beautiful body type is one that fits into Brandy Melville’s small-size-fits-all clothing.

The limited sizes that popular clothing stores stock can prove detrimental to a teenager’s perception of themselves. When only provided tiny sizes, teenagers will perceive those sizes as the only acceptable ones. Indeed, in a survey of over 300 young women conducted by Glamour Magazine, it was found that 97% of women struggle with a negative body image. These body image problems can lead to severe effects, including eating disorders like bulimia and anorexia, body dysmorphia and lowered self-esteem and confidence. Victoria’s Secret, a popular lingerie store targeted toward young women, used to host annual fashion shows that showcased the Victoria’s Secret Angels, models wearing their newest styles. This show created standards and beauty goals that the public aspired to reach, yet Victoria’s Secret received significant backlash regarding the diversity of their models. According to a study performed by retail store and blog Simply Be, the average Angel is 5 feet 10 inches tall whereas the national average is 5 feet 4 inches, according to the CDC. It is unreasonable for girls to expect to look the same as these professional supermodels, yet the media constantly presents teenage girls with images of “what they should look like.”

One can argue that it’s always been a characteristic of society to have an ideal body type. Throughout the past century, many different bodies have been “in fashion,” including broad shoulders, robust curves, an hourglass figure and a thin physique, depending on the needs and values of society. Even though ideal body types have been a trend in society throughout history, the current trend is far from acceptable. The way society stresses the “perfect body” forces girls to obsess over their body types, pointing out flaws so minuscule only they can see them. These social norms not only lead to eating disorders and mental illness, but they also reduce a girl’s perception of herself and her appearance.

With all of the negativity and rigid social norms regarding the ideal body type in the modern fashion industry, it’s important to keep in mind that people are so much more than their looks. Ultimately, students should try to see past the shallow facade of appearance. After all, it’s up to us to encourage confidence affirmed by ourselves, not others.