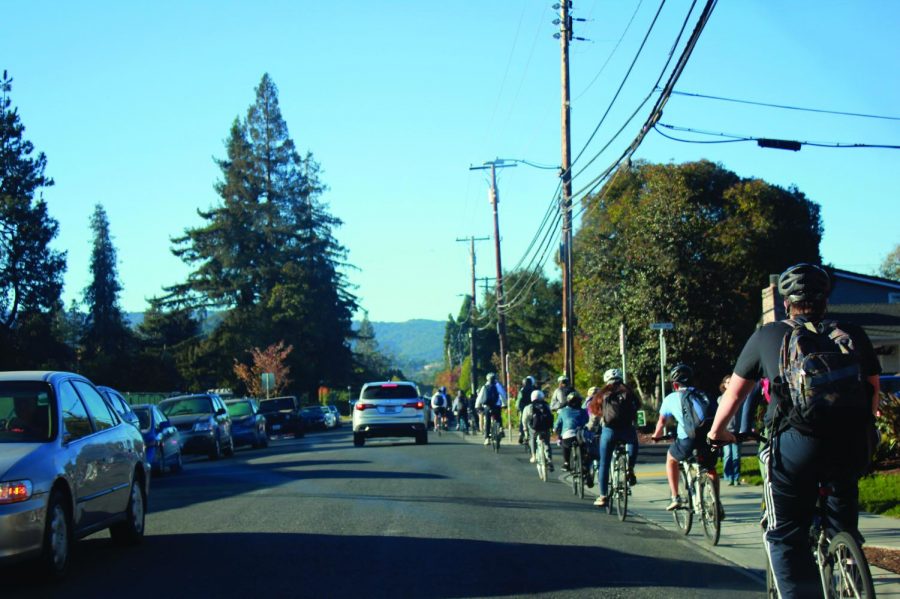 On Friday, March 6, a Greene Middle School student was killed in a bicycle accident near California avenue, raising concerns from Palo Alto residents about the measures the city was taking for bike safety. The accident, which occurred at 7:40pm, happened after the 11-year-old student, who was biking on the sidewalk, turning from California Avenue onto El Camino, was hit by a flatbed truck that turned onto El Camino. The student, likely in the truck’s blindspot, was “pronounced dead at the scene,” according to a Palo Alto Online article.

The article yielded over 15 comments from parents and other residents, including a few comments that claimed that this was an example of an unruly biker. However, most blamed the incident on traffic congestion, careless drivers and especially the lack of bike safety education in schools. Safe Routes to Schools co-chair Jim Pflasterer, who has been working to improve bike safety in our district for over 10 years, believes that the city is currently taking sufficient measures in implementing bike safety courses, especially for younger students. “They’ve expanded and improved each of [the bike safety] programs, beginning with the third grade bike rodeo and some in-class education at the elementary level. They also added a sixth grade bike education class too. They have also added the going-to-high school classes, meaning kids that are in eighth grade are given a class on getting to Gunn or Paly.” While Pflasterer wishes that the city provided bike safety classes to take in high school, possibly in Social Emotional Literacy and Functionality (SELF), there are currently optional courses to take that begin at a middle school level, such as the Middle School Bike Skills class provided by Safe Routes to School. He emphasizes the importance of strong attendance in the courses, and believes it is the student’s and parent’s job to seek out classes as they are readily available. “When you are younger, you want to feel safe. When you’re older, it is your responsibility to be safe,” Pflasterer says.

In the event that a student violates bicycle safety guidelines while commuting to school, they are subject to an education course provided by the city. Recently, sophomore Fay Li was stopped by an officer on her way to school and given a ticket because she was not wearing a helmet. “[The officer] asked me if I had gotten a ticket before, and I said no, and he said that there was an in-person course about bike safety course to take or else my ticket would end up in court and I would have to pay a $100 fine,” Li said. The course, intended for students and their parents, is in-person and lasts about two hours according to Li. It reinforces the bicycle safety rules and guidelines learned in elementary and middle schools while warning students of possible consequences of violating guidelines, such as a head injury from not wearing a helmet, according to a comment from the Palo Alto Online article. “While I do not think you should be getting tickets for not wearing your helmet, I do think that it is a good thing that the [officers] are telling kids about safety. I think the severity of it is too much, but it is good that they are trying to reach out and educate everyone,” Li said.

In addition to the education classes, the city has worked to station safety officers near schools to hold bikers accountable for following safety rules. The city provides Transportation Safety Representatives (TSRs) who are stationed near each Palo Alto middle school and high school during commuting hours, according to Pflasterer. TSRs can either volunteer or be recommended to work at a school, and they along with police officers are responsible for overseeing biker’s safety while encouraging specific routes to school. Representatives and police officers utilize bicycle safety maps designed for each school by the city and other consultants, according to Pflasterer. “The maps are supposed to lay out a preferred route to school from just about anything around the school itself, so that you can walk or bike safely,” Pflasterer said. The maps highlight streets that have green pavement to indicate a special biking route, however Pflasterer acknowledges that these maps are not sufficient. “There are definitely gaps…  in getting kids from here to there or getting people across the city checkpoints, and one of those gaps is El Camino. El Camino has always been an issue because it is not under the jurisdiction of the city,” Pflasterer said.

El Camino, one of the largest streets running through Palo Alto, is controlled by the California Department of Transportation (Caltrans), which is a state agency, according to Pflasterer. To improve the safety of pedestrians and bicyclists on or near El Camino, the Planning and Transportation Commission of the city recently put forth a report that summarizes pedestrian and bicyclist collisions, while proposing a plan to mitigate the traffic. A subsection of the proposed plan recognizes that “Between 2006 and 2015, 51 walking or biking along El Camino Real between Stanford and Lambert Avenue were involved in a collision. This is an average of five people each year over a 10-year span,” the document reads. El Camino was the street that the Greene middle schooler was attempting to cross before the fatality earlier this month. “[The plan] never did come up with the city though, because the timing of it when they completed it was such that there were improvements to Ross Road over in the Eastern part of town,” Pflasterer said. “But there’s something there that needs to be changed. It’s going to be something that’s going to be addressed eventually, hopefully sooner now that [the fatality] has happened.”