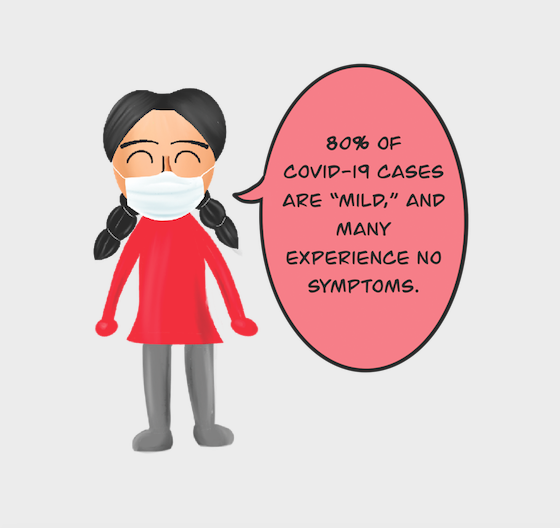 Back in February, when my dad flew to visit my grandmother in Taiwan, she asked him to bring toilet paper. At the time, the request seemed hilarious and absurd: a spark of amusement in the midst of my everyday life. Unbeknown to all of us, our stores would run empty of the same bathroom staple a month later.

By now, we haven’t physically attended school in two months. What began as bewildering is now our strange, new lifestyle; the novelty of the situation has worn off. The end date of the shelter-in-place order was mid-April, then early May. Now that we’ve passed both dates, the deadline has eluded us once more. It might be tempting to let our thoughts drift along the lines of “How much longer…?” But now is not the time to throw in the towel. Now, more than ever, we must remain steadfast.

My dad works at the hospital every week. When he comes home, he doesn’t touch anything; he doesn’t embrace me. Instead, he heads straight to the shower to thoroughly cleanse himself. Each time he leaves, he’s placing everyone in the household at risk, especially those with vulnerable immune systems, and decontaminating is all he can do to mitigate it. It’s not a choice we all made; it’s just something we have to live with.

I’ve watched his life become a whirlwind of emergency meetings, inventory numbers and safety protocols. I’ve watched him adjust to the new circumstances: reading guidelines and attending conferences that detail the latest developments. At work, I know he is joining a fight against a rapidly spreading, infectious disease: an invisible foe that brings waves of victims to hospitals each day.

Seeing this, I can’t fathom how anyone could downplay the pandemic, calling the virus “fake” or shrugging off Center for Disease Control (CDC) guidelines. Carelessly hanging out without taking precautions with masks and social distancing undoes everything essential workers are doing to protect us. Sure, these are extraordinary times, but it’s not an early summer break. It’s a national emergency.

My family’s not from China, but I’m used to people assuming I’m Chinese. Regardless, my Asian heritage is something I’m proud of. Yet, during this pandemic, Asian Americans are taking the brunt of the blame as scapegoats and carriers of the so-called “China virus.” Appearances have become incriminating; this is the ugly underbelly of a people who let their actions speak for their negative emotions.

One day during the shelter in place, someone looked at my dad and made judgements based on his appearance. This person saw him not as a brilliant individual, not as someone’s dad and not as an essential worker saving lives, but as someone inferior. And for some reason, this person saw my dad as someone who deserved to be spat upon.

He was biking home from a day of work at the hospital.

He came home and told us bleakly. He said no more on the subject, gave no elaboration, but I could feel the humiliation: the shock on my mom’s face, the uncomfortable silence, the way the news sank in. Every time my dad passed by that spot, he would shudder and think of the moment when someone’s cruelty made him feel less than human.

It’s not fun to be spat upon, much less beaten up, verbally abused or victimized. I struggled to find rationale for such a hateful action. Just because someone looks Asian American doesn’t mean he or she is contagious. I, for one, have never been to China. Plus, at this point, the virus is as much the America virus as it is the China virus.

The fact is, there’s no reasoning with racism. There’s no logic behind the misdirected hate. That doesn’t stop my parents from worrying that it’s not safe to travel nationally or attend college in another state. What do you do when your country becomes a hostile place?

The first time I wore a mask, I faced unexpected doubt. I worried that wearing a mask would generalize me as one of the crowd, one of the many victimized. To an outsider, do all Asian Americans look the same? When I looked into the mirror, would I still see a unique human being, or just Asian eyes and black hair? It seemed like somehow, putting on a mask would erase part of my individuality. I felt cognizant that it would make me a target.

Then I realized: even so, it’s not a matter of personal opinion, much less vanity. It’s not like opting out of wearing a bike helmet because it ruins your hair. It’s a matter of safety. It’s to protect the elderly couple next door, or the neighbors that might have underlying health conditions and risks. With this knowledge, I donned the mask to protect everyone I might encounter in the outside world.

We’re better off safe than sorry. Each individual can contribute by following CDC guidelines. I understand that social distancing is hard. However, at the end of the day, it’s crucial to put personal preferences aside so we can get through this. The stricter we are now, the sooner it’s over.

This is our gift to the essential workers.