Almost every student is, at some point during his or her high school, faced with a stubborn pile of homework that needs to get done and a clock that reads 11:30 p.m. So, the question often pops up: should students stay up as late as necessary to finish schoolwork? Or is it better to go to sleep earlier, and wake up a few hours before school to do the work? Though it does vary for each student, it is generally better to study at night than in the morning.

Granted, each person’s sleep schedule and study habits are different, so staying up to finish homework may not fit every specific student. People can be divided into three types: morning larks, those who naturally wake up early and sleep early; night owls, those who naturally sleep in and go to bed late; and regular robins, those who do not sleep very late or very early.  So it would be much harder for morning larks to do homework late into the night, and they would do better waking up in the morning to finish homework.

According to The Body Clock Guide to Better Health, however, most college and high school students are night owls, while morning larks are generally people over the age of 60. Therefore, students who do have heavy homework loads would most likely be night owls and would then benefit more from studying later rather than early in the morning. 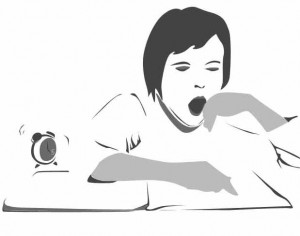 In a purely physiological outlook, the body is better equipped to study later at night than in the morning.  Blood sugar is at its lowest in the morning, which means that students have less of an ability to concentrate. Not only that, but for most students, or at least those who are night owls, their peak melatonin levels are around 5:30 a.m. This increased level of melatonin, according to the National Sleep Foundation, will cause sleepiness, so at that time, anyone trying to study in the morning will have trouble focus  on the material or will simply fall back asleep.

Studying at night may also be more beneficial because night-studying will result in more retained information than studying in the morning. Though psychology teacher Alice McCraley does not recommend studying too late into the night, she does say that going to bed after studying gives the student the ability to better process and absorb the material they just learned.  According to McCraley, if one studies in the morning, retroactive interference—when new information and distractions make it difficult to recall material previously learned—may occur, and all the information that was previously memorized or learned will be forgotten. Instead, the learning done before bed will not be affected by retroactive interference, and so the studying will actually be effective.

Studying through the night might not work for everyone, but it will benefit the largest number of students. This being said, the best course of action for every student is to maximize efficiency and finish all homework and studying before it gets too late. According to McCraley students should get to sleep before 10 p.m., and she believes that, by getting enough sleep, students naturally become more efficient and alert. Even though an early bedtime will cut into the amount of time that can be spent on homework, the extra sleep can help students finish their homework faster and more accurately, which makes up for the lost time. All and all, students should try and avoid a pile-up of homework as much as possible, but if it is necessary to sacrifice sleep for studying, then it is better to study through the night.