Teachers express concern, disapproval over revised reopening plan: “It does not feel like [the district has] our safety as the first priority.” 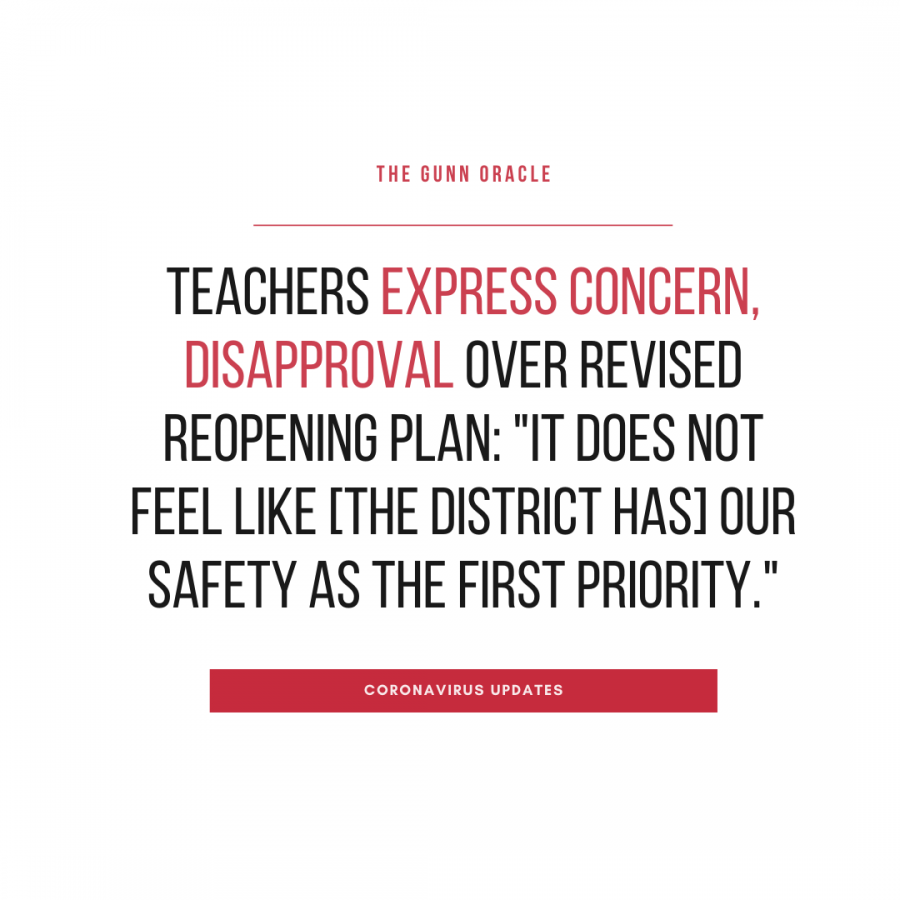 By dividing the student body into two groups and allowing them the option of attending classes over Zoom while on campus or staying home, the reopening plan aims to return students and staff to secondary school campuses as early as March 1.

Staff members were dissatisfied by the fact that the district chose to not consult them in formulating the revised plan. “It seems irresponsible to me to come up with a plan without consulting the two people it affects the most, the student and the teacher,” English teacher Kate Zavack said. “We’re the ones who are going to be living with this reality.”

Palo Alto Educators Association President Teri Baldwin was similarly dismayed at a lack of teacher and student voice in the decision-making process. “From what I heard from the students that called into the [Tuesday night] board meeting and from the two student board members, it did not appear that students had much of a voice in this plan at all,” she wrote in an email. “I know that teachers did not have a voice in it. We have many safety questions, [including one] about their plan to keep so many people on one campus without any cohorts.”

Baldwin, who was not involved in the planning process, said she found out about the reopening plan a few hours before the plan was announced to the public.

Many staff members are also unsure whether the health precautions mentioned by Austin will effectively address risks tied to returning. “We still see everyone, so if one of the teachers gets COVID, then it’s easy for us to spread to other people,” social studies teacher Warren Collier said.

For some teachers, getting vaccinated is a determining factor in returning to campus; under Austin’s plan, teachers do not have to be vaccinated before resuming in-person instruction. “I would have liked at least the guarantee [that] all teachers and staff are vaccinated before anything happens,” Collier said. “It does not feel like [the district has] our safety as the first priority. Also frustrating is why they are so adamant about getting back to school when it’s very clear that a lot of people are not comfortable with that.”

English teacher Mark Hernandez, also raised concerns about the reopening plan. “If all teachers had vaccines, this would be a much different deal.”

Ultimately, teachers spoke to a sense of being unprepared to reopen—and “betrayed,” as Congress put it—given that Austin previously announced in-person instruction would be “highly unlikely” to resume for the remainder of the school year. “For distance learning, we went to trainings [and] to professional development,” Congress said. “Now we’re going to do this totally new thing. We can’t just turn on a dime; we need to have time to plan this all out.”

Hernandez agreed. “I think a lot of us took what Dr. Austin said about having distance learning for the remainder of the school year—we took him [to] his word,” he said. “So this was shocking. We’re unready for this, that’s for sure.”