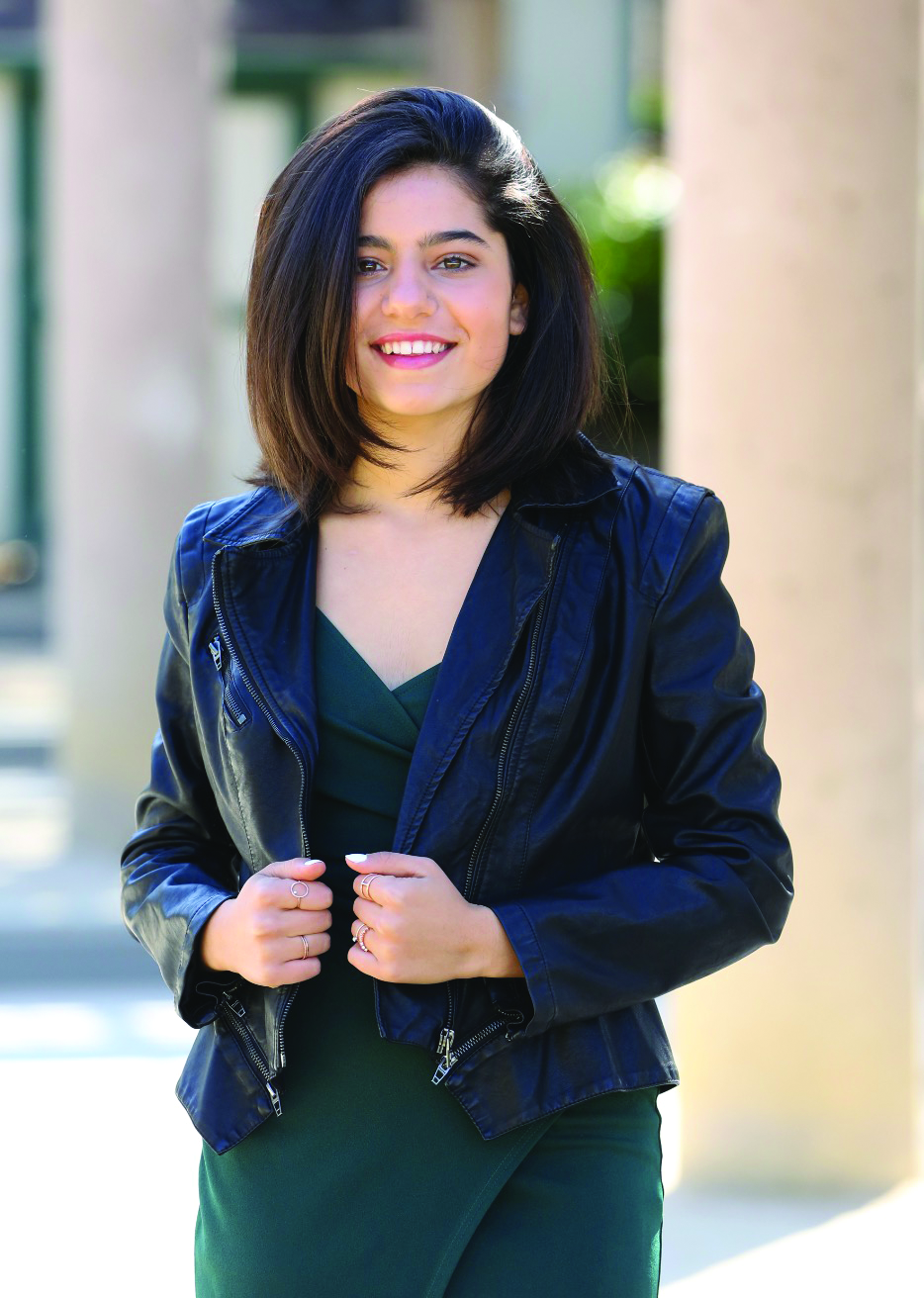 Junior Yara Samad has always had a passion for designing products that will positively impact the world. From the young age of six, Samad has been fascinated with building and creating whatever she can get her hands on. In the past few years, this interest has mani- fested into a hobby of creating startups and engaging in entrepreneurship; most recently, Samad was a finalist in the National HighSchool Design Competition along with her partner for designing a prototype of her “No- Face” app, a tool intended to level the playingfield in the workplace through an anonymous hiring process.

After starting Gunn’s Design and Entrepreneurship Club during her sophomore year, Samad researched design competitions in which she could present her projects. She was especially drawn to the National High School Design Competition, a contest sponsored by the Cooper Hewitt Smithsonian Design Museum, due to its prestigious reputation and progressive culture emphasizing diversity. Indeed, the primary question Samad consid- ered in her contest entry was how to promote inclusivity through design.

Samad chose to accordingly address racial and gender injustices in the workplace. After reading “Freakonomics,” Samad was shocked to learn people of color often don’t make it to the interviewing phase of a job solely because of their name. “[Upon seeing the application of a person of color], a recruiter might read their name and see that it sounded Black, and not even take them to the interview,” she said.

Samad also learned that people who “whitened” their resumes through using more white-sounding names would be two times more likely to receive interview callbacks. Her biggest influence for the project, however, came from her mom’s experiences. “Something happened to my mom—she was actually being paid less than the men who reported to her at her work,” Samad said.

With her innate drive for problem-solving and interest in social entrepreneurship, Samad began her project with a partner from the Design and Entrepreneurship Club (Samad’s partner declined to be interviewed for this article). After creating a business plan and revenue model, Samad then compared her plan to that of pre-existing companies, drafted marketing plans and eventually constructed the prototype for her app.

Samad’s final result, the NoFace app, has three main features that shift the focus of a job application from one’s identity to just their skills. The first feature is anonymous profiles with auto-generated usernames and no pictures. The second feature showcases resumes and credentials without including one’s identity, in an effort to avoid initial and implicit bias. Finally, a faceless interview with a gender-neutral voice filter and witness protection filter technology maintains anonymity.

The project took roughly one-and-a-half months to complete, with the majority of work done over the course of two weekends. “It was kind of like short bursts of working on [the project], instead of consistently working on it,” Samad said. “It was an iterative process.”

Samad also emphasized that the team’s final entry into the design contest was more of a concept sketch. “[The NoFace app is] definitely far from a final product that could actually be made,” she said. “However, this is something I can really take to market and make an actual product of, so that’s my main goal.” To Samad, the greatest takeaway from the project is the connections she’s made; Samad has built relationships with high- profile figures and hopes these connections will open the doors to new opportunities. “We presented to the [Chief Technology Officer] of Target, which was really insane and incredible,” she said. “I think having him as a connection is really going to help me and my other projects move forward, as well as just all the incredible designers and mentors who really helped us.”

Samad and her partner have also been invited to go on a virtual tour with the CEO of Target next year, where they will see Target’s headquarters.

While the NoFace App is Samad’s most recent project, it is only one of her many startups and passion projects. Currently, Samad is working on a project called DREW, which markets a teddy bear designed to help children with autism foster emotional intelligence and social skills. “The way that DREW came about was I was going to a bunch of different Design Thinking conferences, and I met this woman who started a program for young entrepreneurs interested in product design and engineering and combining those two [areas],” Samad said.

Before the lockdown, Samad hosted meetings at her house every Friday with a group of friends to brainstorm project ideas and conduct user research; eventually, the group came up with a concept for DREW. Although DREW has since been modified in the past year, Samad’s initial idea granted the project $1000 in funding through a Google award.

Samad is also working on the prototype for an app that helps users track how much they’re recycling. Users receive points for recycling; points can then be put towards shopping for eco-friendly brands and riding public transport at discounted prices. The goal for the recycling app, according to Samad, was to gain experience rather than create an actual product. “Even though this wasn’t something that I ever planned on actually taking to the next level, I think it was really good just to have something where I could learn the mindset of entrepreneurship,” she said. “It was something where I wanted to learn along the way and get feedback and also make connections with people using that idea.”

Samad’s designs have won numerous awards, including the Gen She Entrepreneurship Makeathon Award at Lyft and a Jacobsen Institute third place award. She also shares her entrepreneurial journey on a podcast and blog, Designpreneurz.

Above all, Samad emphasized the ability to create anything with design and entrepreneurship. “You can make any kind of product imaginable,” Samad said. “Whether it’s digital, physical, whether you’re taking that into architecture or just any form of creating things, [it’s possible].”