We’ve seen this before: Biden’s promise of a “New America” rings hollow when it comes to Middle East policy 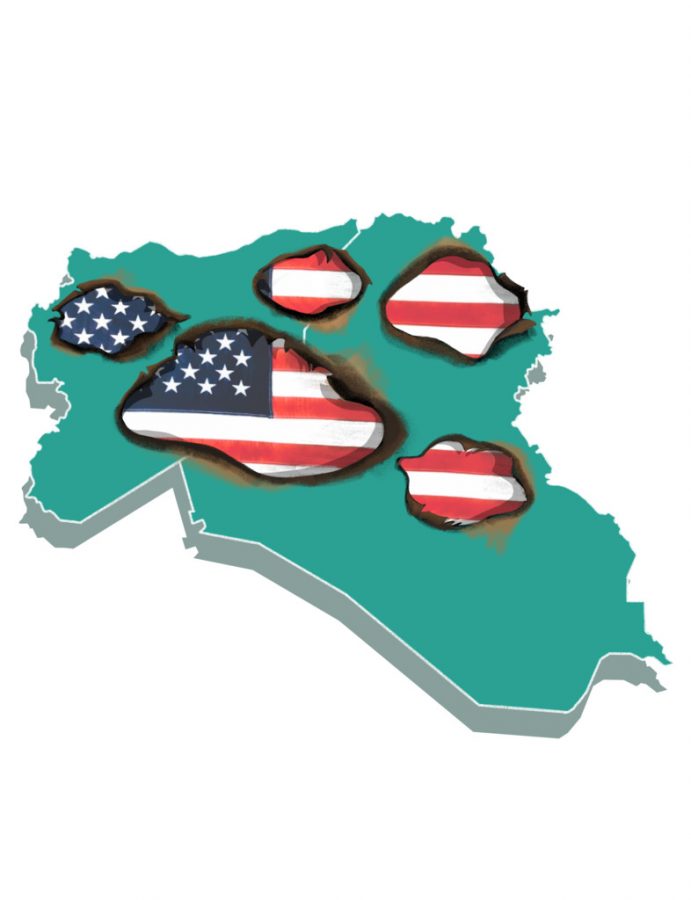 “America is back” was the message that seemingly echoed through every American household when then-President-elect Joe Biden addressed the nation in his victory speech on Nov. 7, 2020. In the wake of his victory, Biden’s supporters flooded the streets in celebration of what the Biden campaign dubbed “A Presidency for All Americans.”

Just a month after his inauguration, however, Biden ordered airstrikes on Iran-backed militia groups in Syria, killing 22 people, according to the Syrian Observatory of Human Rights. The attack came in response to an Iran-sponsored rocket attack on a U.S. military base in northern Iraq, which injured eight and killed one.

In an increasingly divided political era, Biden’s campaign focused on the promise to depart from the Trump era. Indeed, the campaign pledged to offer newly bipartisan solutions to the problems the United States faces, namely the COVID-19 pandemic.

Yet Biden’s recent actions in Syria hardly reflect a new America, but are instead reminiscent of a long and tumultuous saga of U.S.-backed settler colonialism, exploitation and violence within the Middle East. A further investigation is necessary, then, to contextualize Biden’s actions within the history of the United States’ presence in the Middle East. By diving into the history of U.S. imperialism within the Middle East, and comparing it to the present, we can better understand what Biden’s actions mean, and what they can tell us about our future.
Iran, 1953
Though dialogue around U.S. involvement within the Middle East has long orbited around countries such as Afghanistan and Iraq, one of the earliest examples of the U.S. acting like an imperial power was in the country wedged between Afghanistan and Iraq: Iran.

After World War II, oil emerged as a must-have resource for countries seeking to be at the top of the geopolitical ladder. Specifically, the United Kingdom and the United States both made numerous efforts to control oil fields in the Middle East. The British-owned Anglo-Iranian Oil Company reaped millions of dollars from Iran, so when then-Prime Minister Mohammad Mossadegh of Iran nationalized Iran’s oil industry, effectively undermining Britain’s oil revenue, the British wanted to act. Meanwhile, America had its own worries that Mossadegh was too sympathetic towards the communist cause, prompting the United States and Britain to collaborate in a joint effort to remove Mossadegh from power.

The effort, dubbed “Operation Ajax” by British and American operatives, was a plan to stage a coup against Mosaddegh in Iran’s capital city of Tehran.

As a result of Operation Ajax, Iran would transition from a constitutional monarchy to the more authoritarian-style government that is in place today. The Shah of Iran, who aided the U.S. and Britain in getting rid of Mosaddegh, would abolish the many democratic processes that were in place before the coup in 1953. Director of Iranian Studies at Stanford and Hoover Institute fellow Dr. Abbas Milani noted how public perception in Iran of the U.S. changed after the events of 1953. “After ‘53, I think this sense that the U.S. is an imperialist, just like Britain, they’re after their interests, and they have propped up this authoritarian Shah—that became the dominant discourse in Iran,” he said.

Because of the United States’ interference in Iran, the Iranian government has harbored anti-American sentiments ever since. Though the negative implications of U.S. involvement in Iran are very real, like all things in history there’s more than one side to the story. “You talk about imperialism in the Middle East and you’re absolutely right, that there was that,” Milani said. “But there was also [the U.S. contributions of] the American University in Beirut, the American University in Cairo, the first nursing school in Iran, the American College in Iran. These were, I would say, the lighter side [of imperialism].”

But despite the good that the U.S. has done, after the events of 9/11, administration after administration—both Democratic and Republican—have taken an aggressive approach to resolving conflicts within the Middle East. While the West became more progressive and aware of social plights, it also has continuously disrupted lives abroad. “When the West was talking about democracy, it was talking about liberalism, it was talking about women’s rights and human rights, but it was doing some pretty nasty things in Africa and India, in Latin America and around the world,” Milani said. “We talk about the Age of Enlightenment—enlightenment had a dark side.”
The War on Terror
On Sept. 11, 2001, Americans watched as the twin towers in New York City went up in flames, firefighters rushed into burning buildings and paramedics treated wounded civilians who lay around pieces of rubble. The attack, which would later be referred to as 9/11, caused the deaths of almost 3,000 people, injured countless others and caused severe health implications in the years that followed. Social Studies teacher Laurel Howard recalled how her family reacted in the aftermath of the attacks. “I remember my mom talking on the phone being like, ‘Could Disneyland be bombed?’” she said. “There’s this feeling of you never know where the next attack is going to be. That’s the very purposeful part of terrorism.”

Howard wasn’t the only one to feel that way. The events on 9/11 brought a new kind of fear to many Americans who suddenly felt vulnerable on American soil. Only a few days after the attacks, then-President George W. Bush announced the infamous “War on Terror.” “Our war on terror begins with Al Qaeda, but it does not end there,” he said in an address to Congress. “It will not end until every terrorist group of global reach has been found, stopped and defeated.”

What followed was the war in Afghanistan, the United States’s longest war ever—a war that is still continuing to this day. And soon after, in 2003, Bush would announce the invasion of Iraq, a separate effort to topple the regime of dictator Saddam Hussein, who American intelligence agencies believed possessed nuclear weapons.

Though it may often seem like American’s are disconnected from the U.S.’s war actions abroad, thousands have died because of U.S.’s war actions in the Middle East. According to a study by Brown University, approximately 500,000 people have died in the post-9/11 War on Terror.

With so many lives lost, the question must be asked: Were the wars in Afghanistan and Iraq truly necessary? And furthermore, how much did the United States’ previous imperialism in the Middle East lead to anti-West sentiments that culminated in the attacks on 9/11?

A common phrase within the post-9/11 anti-war movement was that America “funded”’ the Taliban. The story behind U.S. involvement in the Middle East, however, is much more complex and nuanced than that. “We hit the Cold War after World War II, and [in the 1950s] we have this big divide in our world between, ‘Are you going to be communist, or are you going to be capitalist?’” Howard said. “Afghanistan was democratic, and then it was overthrown by a communist group. So now, Afghanistan and the USSR (Soviet Union) are very closely tied. And to America, the more communism expands, the more Americans are in danger, so we see a proxy war emerge in Afghanistan.”

Among those fighting against the Soviet Union in the war was Osama Bin Laden, the son of a wealthy Saudi Arabian real estate mogul and the eventual orchestrator of the 9/11 terrorist attacks.

By funding the Taliban in order to stave off Soviet power in Afghanistan, the U.S. directly helped the Taliban rise as an extremist political faction, and this rise of the Taliban contributed to the attacks on 9/11.

Throughout U.S. involvement in the Middle East, there’s a common theme of the U.S. seizing power from the people, and people resenting them for it. In Iran, the U.S. shattered a democracy and gave way to an authoritarian regime that viewed the U.S. as an imperial power that was seeking to control their way of life. In Afghanistan, the U.S. initially aided what would later become the Taliban and Al-Queda, causing years of war and thousands of deaths between the two countries.

Both of these instances demonstrate the cyclical nature of imperialism. The current conflict between the U.S. and the Middle East is the legacy of decades of cascading, causal events: It’s no longer whether the U.S. can remove itself from Middle Eastern affairs, but whether relations between the U.S and the Middle East can be repaired after the two have become so closely intertwined—and so much damage has been done.

Maybe the first step toward repair is acknowledging and understanding this complicated history. Through her teaching, Howard hopes to provide different perspectives on the United States’ actions in the Middle East, even if those perspectives paint the U.S. in a darker light. “I do think part of the history of America is seeing the way America has interacted with the world and what the benefits and the consequences of that have been,” she said. “We don’t exist in a vacuum, so how can we understand what’s going on within our soil if we’re not thinking about what’s going on elsewhere?”
Biden’s “New America”
To many Americans, Biden’s pledge to create a “new America” was certainly appealing. Much of Biden’s campaign focused on his promise to answer calls for social justice reform in the wake of the Black Lives Matter movement. However, Biden’s decision to bomb Syria is jarringly similar to past U.S. involvement in the Middle East, throwing into question whether Biden is truly capable of creating a “new America.”

Despite some criticism by members of Congress, Biden’s actions in Syria have largely gone unnoticed or ignored by some of his supporters. This is especially concerning considering the fact that Vice President Kamala Harris and Press Secretary Jen Psaki questioned President Trump’s authority to bomb Syria in 2017 without congressional approval, but have so far supported Biden’s actions in Syria.

U.S. Government teacher Brian Miguel noted how political biases enable double standards. “We have that double standard of excusing when our guy does it and being upset when the other side does it,” he said.

In the midst of a hyper-militarized age, however, when the military-industrial complex seems to be just as strong as ever, it’s worth revisiting if the president should have the power to attack other countries without congressional approval. “The original interpretation of the Constitution [is that] one of the 18 enumerated powers of Congress is to declare war, and this would seemingly be an act of war,” Miguel said. “Although, ever since the Korean War, just about all U.S. military actions have gone through without congressional consent.”

If the Biden administration continues the same foreign policy stance as previous administrations have, it increasingly runs the risk of making Middle East imperialism an accepted norm for Americans. “I think it’s natural when something is so common to stop being so shocked and alarmed by it,” Miguel said.

And, despite his progressive tendencies, Biden shows no inclination to end U.S. interference in the Middle East. While the Biden-Harris ticket may tout a “new America,” their actions prove that no matter what new message or agenda is behind the actions of U.S. politicians, the neo-colonial relationship that the U.S. has with the Middle East will remain in place—unless significant action is taken.

Miguel highlighted the importance of continuing to hold presidents of both parties responsible for their actions abroad. “There is so much consistency from administration to administration and there is some positive to that,” he said. “But there also is that element of just keep doing the same old, same old, so if you want change, if you have a specific idea or vision, there’s no reason to let up based on who’s in the White House; you always have to fight and push.”

Update: On April 14th, Biden announced a troop withdrawal program in Afghanistan that would conclude on Sept. 11, 2021, the twenty-year anniversary of the 9/11 attacks.