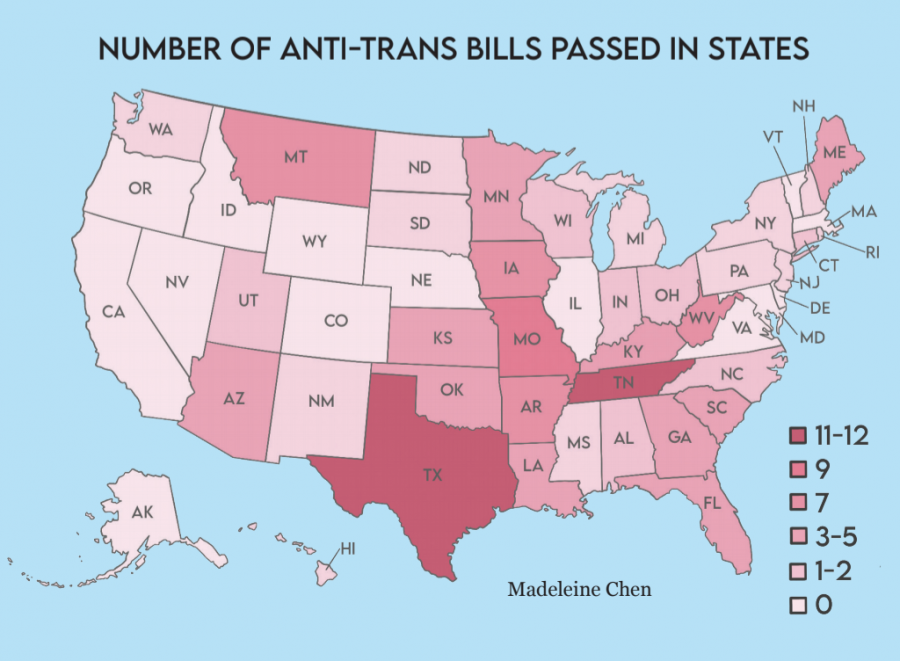 “I spend my free time [playing] with my cats and chickens, FaceTiming my friends and dreaming of when I will finally meet Dolly Parton,” Kai Shappley, a transgender 10-year-old, said in her testimony before the Texas Senate Committee of State Affairs. “I do not like spending my free time asking adults to make good choices.”

On Monday, April 12, Shappley testified against two Texas bills, SB 1311 and SB 1646. SB 1311 would criminalize both medical workers and parents applying for medically approved treatments for either physically transitioning into their identified gender or delaying puberty. SB 1646 redefines child abuse to include aiding a minor with their physical transition. Regardless, both bills have failed to advance out of the House, a potential sign of progress towards transgender healthcare rights in Texas state legislature.

Since the start of 2021, 28 states have introduced anti-trans legislation. The most recent bill is Montana’s “Save Women’s Sports Act,” passed on April 23, which bans transgender students from participating in girls’ or women’s sports. Additionally, Florida recently legalized the inspection of student genitals in competitive sports if the student was suspected to be transgender. In the context of present-day America, this concerning trend towards anti-trans legislation threatens not only the physical safety but also the mental health of transgender youth across the country.
Past Administrations
Obama-era policies protected people from discrimination based on sex. However, Trump-era legislation began to challenge such policies, especially concerning trans youth. In February 2017, Trump removed guidelines that placed trans individuals under the protection of Title IX, which prevents sex-based discrimination. This provoked a heated discussion about trans people’s bathroom rights. “In 2015, my high school banned me from using the boys’ bathroom because I’m trans,” activist and American Civil Liberties Union (ACLU) board member Gavin Grimm said. “My case was the first trans bathroom case that the Supreme Court accepted. But when the Trump administration rolled in, one of the first things they did was get rid of the Obama-era Executive Order.”

From 2016 to 2020, the Trump administration allowed such anti-trans bills to pose more restrictions on gender expression, compounding America’s history of discriminatory legislation against the LGBTQ+ community. The political rhetoric that Trump brought into popularity directly impacted minorities and widened the divide between Democrats and Republicans. “They have this agenda,” Grimm said. “[And] the reality is that there’s a culture of distrust, as well as a specific framework of language, that the Trump administration and Trump himself built around Joe Biden and the Democrats.”

Palo Alto City Council member Greer Stone, an ally of the trans community who has worked on policies directed towards inclusive language in legal settings, sees the deterioration of politicians’ integrity towards transgender rights as a direct result of the previous administration. “Unfortunately, I think it’s just kind of the Trump effect—causing certain conservative politicians to recognize that they can gain more politically with their base by passing these ignorant legislations rather than supporting greater civil rights for all people,” Stone said.

In January, following his inauguration, President Biden signed an executive order to combat discrimination against LGBTQ+ people in housing, education and healthcare. While this worked to return rights to the targeted community, Biden’s action seemingly catalyzed a cascade of anti-trans bills passed or introduced in state legislatures. “The executive order was really scary to conservative Republicans,” Grimm said. “This kind of behavior from Biden fits perfectly in line with what Trump warned them about. It’s pretty inflammatory—‘Oh no, Biden’s getting in here, and he’s been one-hundredth as progressive as your average leftist would like him to be; this is really scary’—so they’re going to be scared, regardless of what he did. It has provoked some direct responses without a doubt.”
Support in California
Sophomore Stella Keating, a high school student from Washington and the first transgender teenager to testify before the U.S. Senate, lives in a community similar to California. “Right now, I live in a state where I have equal protection under the law,” Keating said during her testimony to Congress on March 16. “As a sophomore, I’m starting to look at colleges. All I can think about is this: less than half of the states in our country provide equal protection for me under the law.”

Historically, California has not passed anti-trans policies—if anything, California is a leader in legal inclusivity and LGBTQ+ rights, with the exception of a few social anti-trans protests. Southern California has dealt with a variety of anti-trans movements, though all ultimately failed at setting anything into law.

Nonetheless, California’s local history of eugenics continues to harm the trans community. “There have been a lot of examples of systemic discrimination and racism and hate against all underrepresented groups in California,” Stone said. “We just don’t focus on it. We don’t teach it, and we don’t study it. We really need to understand our past—the good and the bad—to be able to better understand the problems  that we’re facing today and how we can prevent them in the future.”

Stone explains that raising more awareness among students is the first step. He also suggests commissioning a study on the issues facing the LGBTQ+ community in California, and he hopes the state will recognize its own history and teach it in schools.

Currently, there are programs within the Palo Alto Unified School District (PAUSD) included in the Gunn curriculum that are intended to support LGBTQ+ students. “Each of the five secondary schools has a Gay-Straight Alliance (GSA),” GSA advisor Daisy Renazco said. “Ours is referred to as a Gender and Sexuality Alliance. They’re all there to support students. There is also a districtwide LGBTQ+ committee for adults that meets regularly, and that’s where a lot of the conversations are had about more districtwide policies and districtwide implementation.”

Despite all of the talk of inclusivity in the Bay Area, it ultimately comes down to how much can actually be translated into equal treatment of minorities. “I was Vice Chair at the Santa Clara County Human Rights Commission,” Stone said. “One of the things that we were pursuing there was to change all language within county policies and ordinances and laws and documents to be gender-neutral, because most laws are written with the male or female pronouns.”

In the meantime, California’s progressive ideals are widely recognized. “We are grateful, and we understand that the state of California is oftentimes a leader in terms of more accepting laws,” Renazco said. “The students within our GSA and within our district feel like there are a lot of policies and a lot of adults that advocate for their own safety and their well-being, so they feel cared for.”
Mental Health Effects
While transgender identities are not legally at risk under California law, the mental health impact of threats elsewhere can still have strong repercussions on individuals. In 2015, a Veale statistic from the American Association of Suicidology reported that 1 in 3 transgender youths have attempted suicide in California.

According to Grimm, bills threatening trans safety and rights only add to the struggles of a trans individual, which already include dysphoria and social stigma. “Watching a bill [being] debated publicly and watching a bill move through the courts to potentially impact your life in a negative way is absolutely terrifying,” Grimm said. “It turns an aspect of who you are into negative public discourse.”

A common issue in classroom or legal settings is minority lives being discussed as talking points or educational topics rather than human experiences. Transgender people are discriminated against both by law and by their environment, based on their gender identity and not their humanity. “It’s really just a crime across the entire world for young people to recognize that there are elected leaders who believe that they are less than others simply because they’re transgender,” Stone said.
Future of Trans Rights
Moving forward, the main goals are to ensure that anti-transgender legislation is not made into law and that there are laws passed to reverse such bills in the future. However, placing all of the responsibility in the hands of politicians may not be the best option. “I think trans activists and other civil rights leaders are going to lead us to our salvation,” Grimm said. “I do not think it’s going to be moderate Democrats or prior prosecutors.”

Grimm’s Title IX case, currently moving to the Supreme Court, will be one to look out for, in addition to individual laws aimed to prevent discrimination on the state level. There’s still hope that the anti-trans bills passed in recent months may be nullified, perhaps even in higher courts. “The Supreme Court doesn’t take many cases, [but] these might end up being cases that the Supreme Court would want to take because they would impact dozens of states,” Stone said. “I would imagine litigation happening immediately, and we’ll have a decision by the court that could reverse the anti-trans bills.”