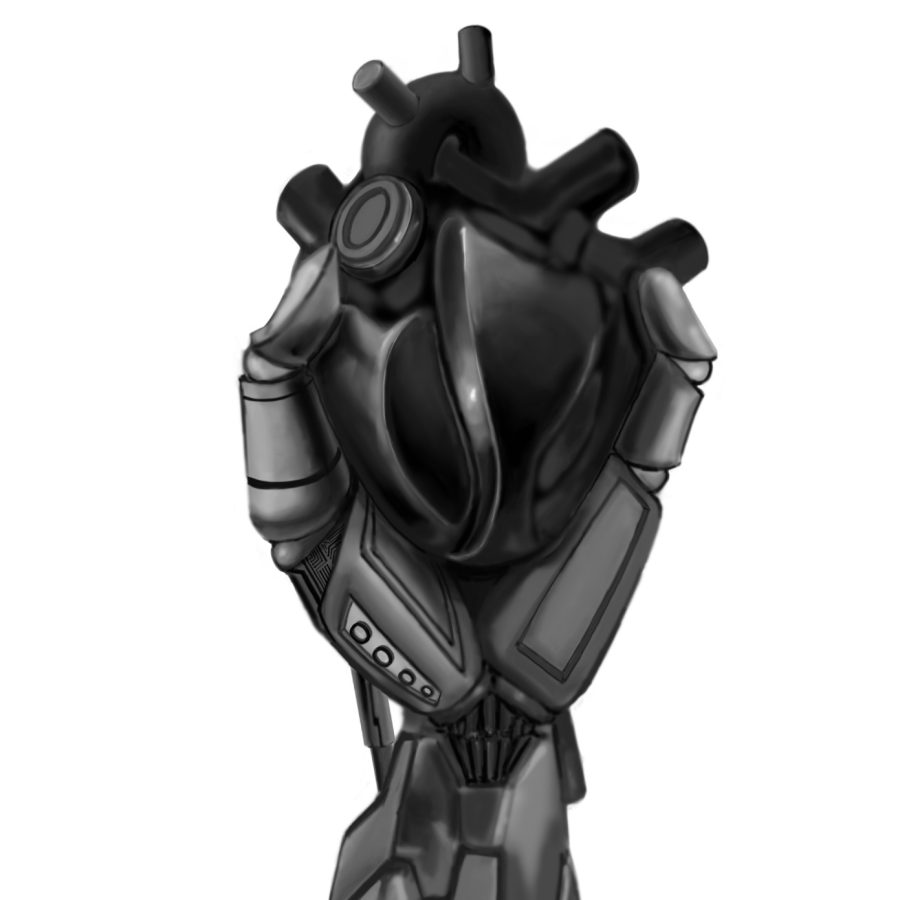 What does it mean to be human? Gunn Theatre’s fall production, “Robots vs. Fake Robots,” explores this question through a mix of comedy and tragedy.

According to play director Kristen Lo, the show is set in the year 6000, when robots rule the world and being a robot is the standard. “Every once in a while, a human decides that they want to be a robot,” Lo said. “It’s kind of like “Mean Girls.” Robots are popular [and] attractive. Everybody wants to be them; everybody wants to date them. Some-
times, people living their meager lives would like to be robots, too.”

The story follows one human, Joe, who desperately wants to become a robot. Senior Quincy Rosenzweig, who plays the human protagonist, explains his character’s motivations. “[Joe is] very unhappy with life,” Rosenzweig
said. “[My character] hates being a human. At the start of the play, I am watching the robots dance, and I quickly become obsessed with becoming a robot and becoming good. I start to associate being a robot with being good.”

Junior Chloe Lee, who plays robot prostitute Garlic Press, noted that on a philosophical level, the play examines the futility of striving for perfection. “It has something to do with trying to be absolutely perfect,” Lee said. “That’s something that’s actually very toxic for you.”

Rosenzweig agreed with the sentiment that striving for complete perfection can be harmful. “I’ve been tying the play to social media and being fake on it,” he said. “Also, the idea of being true to yourself rather than admiring the idea of something else comes up.”

On the tech side, Stage Manager senior Daniella Maor said the sets and costumes will reflect the setting as well as the vanity of the characters. “We want it to look post-apocalyptic,” Maor said. “The set itself is going to have robot propaganda on the walls and maybe some human graffiti.”

This year the play will take place on the N-Building steps instead of the Spangenberg Theatre. The N-Building steps, with their almost Brutalist architectural style, will serve the play well. The costumes will be less silver and futuristic than classic robot images. “More than looking robotic, I just want them to look good,” Lo said. “When you look up pictures of the performances, it’s more like they are popular clubbing people than they are metallic ‘Terminator 2’ robots.”

As the first live and in-person theatre production in more than a year, the play has obviously dealt with COVID-19 restrictions. All of the actors and members of the stage crew provided vaccination cards in order to make the group feel safe. “When they’re on stage performing, they will not have their masks on,” Maor said. “We did ask for all their
masking comfort levels to make sure that they’re okay with it. While they’re not on stage, they will have to have their masks on, along with [the tech crew].” Audience members will be required to wear masks for the entirety of the show.

If the fascinating concept, fun sets and fantastic acting aren’t alluring enough, perhaps the return to Gunn’s tradition of excellent theatre productions is. “This is something that we’ve missed during COVID-19:—sitting next to somebody and reacting and hearing the reactions of the audience,” Lo said. “Coming out and experiencing art with other people is even more important now that we are reestablishing these connections with humans rather than just watching something on a screen.”

The production premieres at the N-Building steps on Nov. 5. Students can buy tickets at gunntheatre.org.