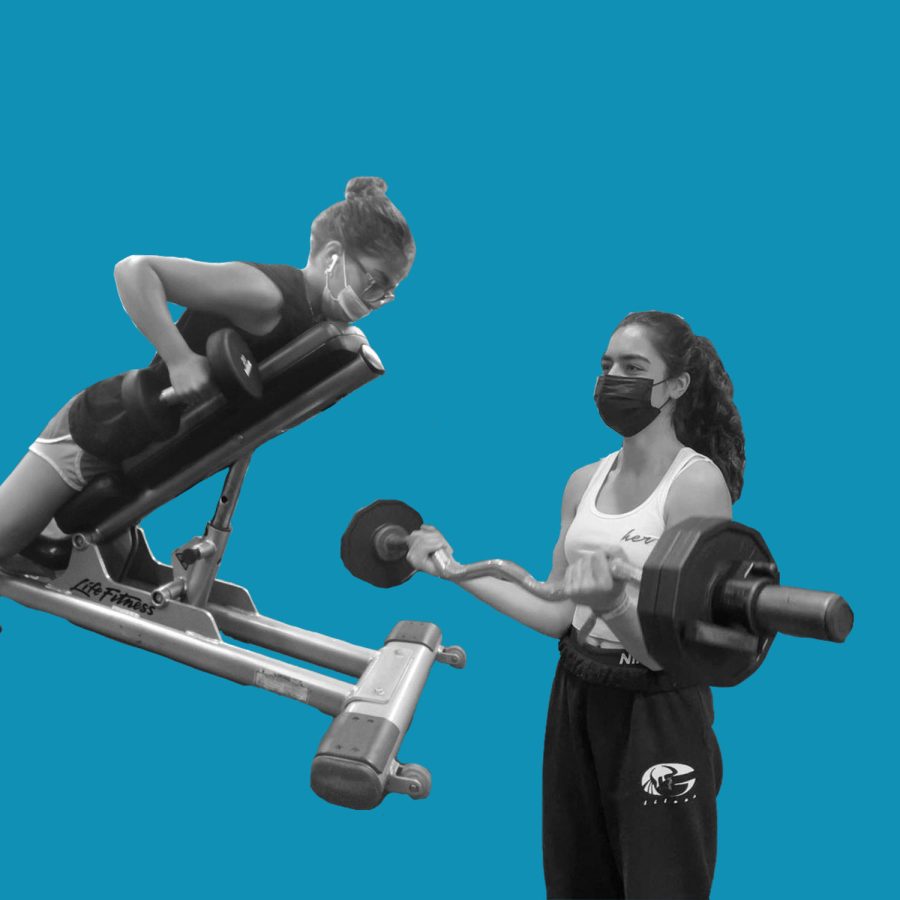 In the media, the ideal body type for women has traditionally been portrayed as “thin.” The depicted clothing size has always been a size 0 or 2, with brands advertising “fat-slimming” products and lots of cardio exercise to achieve a lean figure. In recent years, however, a handful of women—including senior Lucia Acosta, senior Siham Arsalane and junior Beanie José—have been defying this stereotype by weightlifting, and, as a result, intentionally growing their muscles to have a strong build.

Acosta, Arsalane and José began their lifting journeys over quarantine in the absence of their school sports. Whether the sport was cheer, wrestling or water polo, all lifters had one thing in common—the desire to improve their strength while challenging themselves physically and mentally. To combat feelings of isolation during the COVID-19 lock down, José, a wrestler, turned to lifting as both an outlet and a productive use of time. “When I’m lifting, I know that I have to push myself,” José said. “Being able to have the mental strength to do it is just as important as physical strength.”

Acosta, the cheer team co-captain, also emphasized the importance of stamina when lifting. “You constantly have to be pushing yourself to finish your set or have a personal record,” she said.

Acosta incorporates cardio into her gym routine as well. With advice from a personal trainer over the summer, she has tailored her workouts to serve her body’s needs. “My routine is usually doing cardio and running a mile, and then focusing on one different area of the body depending on the day,” she said.

Women often face an entirely different challenge in weightlifting: competing in a mostly male-dominated sport. Both José and Acosta expressed frustration over the perception that lifting is for men. For Acosta, this has directly affected her experience during her weight training sessions. “When I go to the gym and it’s full of men, I am more self-conscious and feel more judged,” she said.

José, who is already accustomed to the “male-dominated” aspect of wrestling, tries to find the positive side of it. “Being able to lift with your male friends is encouraging because all they want is for you to be better,” José said. “I take the whole ‘male-dominated’ thing as motivation and a challenge. Nothing feels better than beating a man at his own game.”

For any weightlifter, what matters most is the positive impact weightlifting has on their mind and body. Like José, weightlifters often go to the gym as an escape. “After I work out, I feel like a whole new person,” José said. “My mood goes up, and I feel proud o myself because I know I did something good for my body.”

Arsalane, a water polo co-captain, also started to weightlift this past year during the water polo off-season. She emphasizes the power of lifting to feel good in your own skin. “It’s a really good way to work your body and become strong,” Arsalane said. “Afterwards, it feels super good to get [a good pump].”

Not only does lifting have a positive short-term impact, but it also empowers women in the long term. Lifting shifts the focus from having a lean body type to a strong one. In doing so, it reframes thinking from controlling weight by eating less to building more muscle through exercise.

Many teenage girls, Arsalane included, struggle with body image issues. These issues were especially prevalent over quarantine when at-home exercises became popularized through online videos such as YouTuber Chloe Ting’s “10 mins Abs Workout for a Flat Stomach.” Through lifting, however, Arsalane has been able to focus on how her body feels by choosing exercises that she enjoys that make her feel stronger. “Instead of trying to look skinny, I try to look strong now and focus on how I’m feeling instead of on my looks only,” she said. “It’s definitely made me feel better about myself because I feel a lot more powerful.”

Despite weightlifting’s short- and long-term effects, many women still shy away from the sport. Arsalane encourages anyone, even those without experience, to try lifting. “Weightlifting should be destigmatized for women,” Arsalane said. “It’s not about lifting as much as the other people around you. It’s about working your body in a way that makes you feel good.”